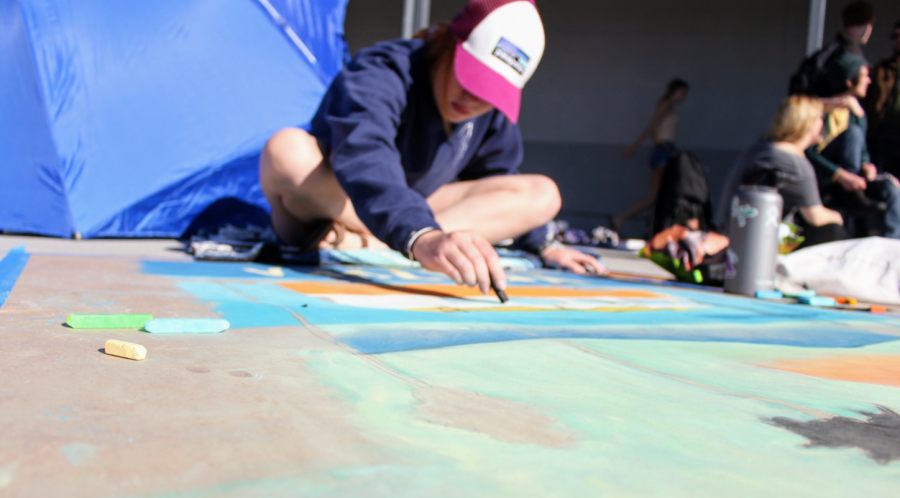 Foothill art students sprawled out all over the quad, hunching over various pieces of art that they recreated with simply a little bit of chalk, creativity and collaboration. This year’s annual chalk festival, which took place on March 26 and 27, yet again left people walking past each student-created image, longing to walk a little farther and to see a bit more.

Students that participated in the chalk festival were excused from class to work on their creations for two days. The groups layed out their paper canvas under the sun and allowed the chalk to stain their hands and clothes as they worked away at their pieces.

Many students praise the chalk festival for its ability to allow student creativity to flow, enable cooperation as a team, and on a broader scale, work beyond the usual “limitations” in the classroom.

Anahi Nuni ‘20 enjoys the opportunity to “create one vision for other people to see.”

Similarly, Noel Domke ‘18, who has been participating in the chalk festival for three years, said that with chalk one is able to “build on it, and then it eventually comes to life.”

This year, Domke’s painting was Johannes Vermeer’s “Girl with the Pearl Earring.” This piece in particular is one of Domke’s favorite recreations she’s done.

Though the chalk festival was praised on several accounts, not nearly as many people participated in the annual event in comparison to previous years. According to Eden Hoover ’18, this could be because this year, students had to pay $10 if they wanted to participate or find someone to commission their work.

Overall, students still enjoyed the festival because the of benefits to their own creativity, as well as for the perfect opportunity to observe their fellow peers’ work.

Donovan Clow’s ‘20 favorite part as a whole was “getting to see everyone else’s artwork and how they [incorporated] their beliefs and what they think is cool into their artwork.”

Clow was working with Grace Combs ‘20 on a recreation of one of Shepard Fairey’s pieces.

“We all decided that we wanted to do a piece that really meant something, and is very powerful,” Combs said.

Fairey is known for his political voice that he incorporates into his work, and Combs wanted to make a statement with this recreation of his work.

“I’ve never worked with chalk, so this is [new] for me,” said Combs. “This was an opportunity to try this new medium.”

As a whole, students enjoyed the opportunity to use their creative individuality to create chalk pieces.

Nuni believes that “the chalk festival […] is a day to have fun, [to] not worry about your classes and to just enjoy other people’s art as well as your own.”