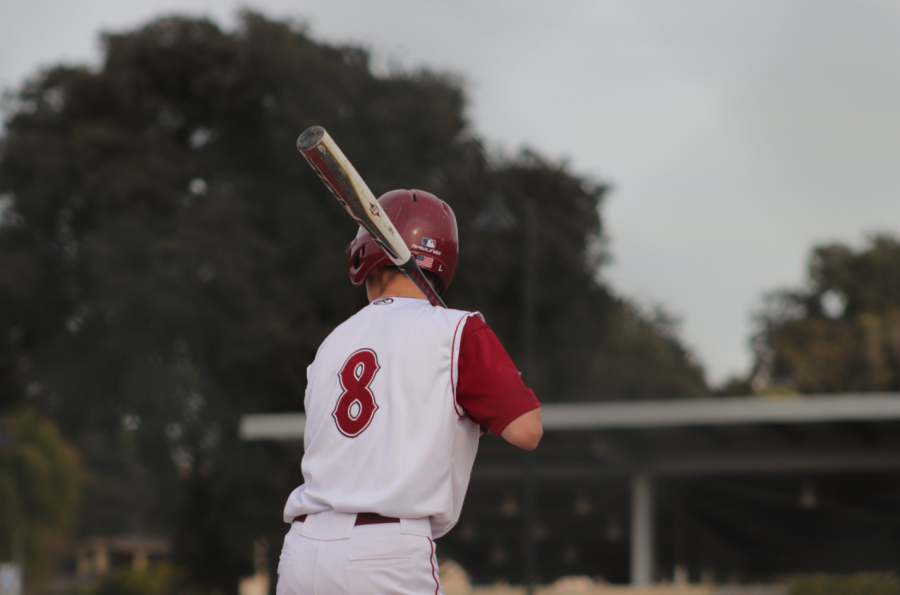 On Monday, March 19, the boys’ baseball team hosted the Eagles of Oak Park High School in their first home game of the 2018 season. Although Foothill committed minor errors, they eventually accumulated and left the game out of reach. A rough first inning with six runs allowed contributed to that. Once the Dragons settled in, the deficit proved to be too large and it resulted in an 8-2 loss at the hands of the Eagles.

Starting pitcher for the Dragons, Evan Nichols ‘21, had issues locating his pitches in the first inning, leading to two consecutive walks to begin the ballgame. With one out, he loaded the bases as the clean-up hitter for Oak Park was hit by the pitch. Nichols recorded a strikeout in the next at-bat, and suddenly it seemed as if he could work his way out of the hole that he had dug for himself.

That wasn’t quite the case. Oak Park’s runner on third base stole home without a throw from Nichols, giving the Eagles a 1-0 lead. In the following at-bats, Nichols scattered a few more walks and another hit-by-pitch (HBP) en route to allowing five more runs, although most of the scores were unearned due to two errors. He lasted only two-thirds of an inning and was replaced by Tyler Hong ‘20, who kept the Dragons in the game going forward.

Already down 6-0, Foothill was stifled at the plate against Oak Park’s pitching. In the first four innings, the Dragons could only muster two hits and were held scoreless.

Meanwhile, Hong was in control from the moment he stepped on the mound. When he came on in relief of Nichols in the first inning, Hong struck out an Eagles batter to prevent any more runs from scoring. In the next five innings, he kept Oak Park at bay and did not allow any runs.

Head coach Clint Ellison said that Hong “did a really good job, came in in a tough situation and […] closed the door for five-and-a half innings” over the span of his outing.

The Dragons made their first moves in the bottom half of the fifth inning. To lead off the inning, Victor Valencia ‘19 drew a walk and advanced to second base on a groundout. It was Jacob Bridges ’18 who put Foothill on the scoreboard, however. Bridges’ powerful swing carried the ball down the left field line and fell just short of the wall, scoring Valencia. Later in the inning, Hong laced a single through the middle of the infield. Bridges came home on the hit and it got the Dragons within striking distance in what was now a 6-2 ballgame.

Following a scoreless sixth inning on both sides, it was Oak Park that looked to put the game away in the top half of the seventh inning. They were able to do just that; the team pieced together a few base hits, which eventually resulted in two more runs scored by the Eagles. The damage could have been worse, but Oak Park’s runner on first was picked off to end the threat.

Despite Karl Roth ‘18 drawing a leadoff walk, Foothill never gained any momentum in the final inning. Down six runs, the Dragons desperately needed a rally but could not spark one. Following Roth’s at-bat, Oak Park recorded the final three outs and put the finishing touches on their 8-2 win.

Roth believes that the results would have been slightly different with an altered approach, saying that he feels “like we should play more as a team […] from start to end.”

Last year, the Dragons were crowned champions of the Frontier League. Roth stated that “we’re trying to repeat” as league champions and that the early season performances won’t necessarily reflect the end results.

Following the home loss, the Dragons have a chance to redeem themselves on Saturday, March 24. They will travel to Oak Park and take on the Eagles for the second game of the season series between the two teams.

In order to even the season series, Ellison believes that the team needs to “take care of the basics, put the ball in play when we need to [and] make routine plays.”