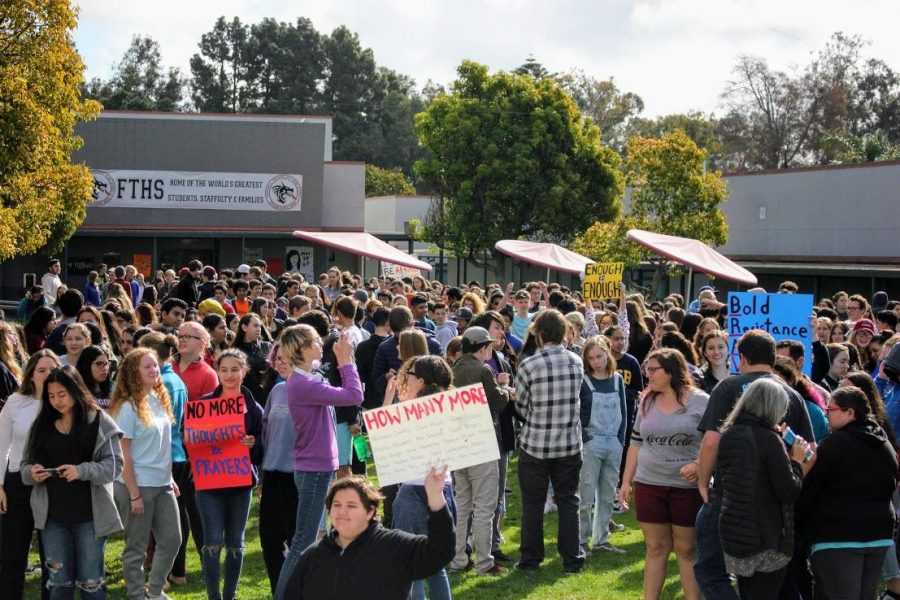 Multiple students made signs in protest of current gun legislation and to raise awareness during the 17 minute walkout. Credit: Gabrialla Cockerell / The Foothill Dragon Press

On the one month anniversary of the Parkland, Fla. school shooting, students gathered today, March 14, in unity to commemorate the lives lost and to emphasize the need for change as part of the national school walkout organized by the Women’s March. The walk out took place from 10 a.m. to 10:17 a.m., 17 minutes long to represent the 17 lives lost in the Florida shooting.

Hannah Yale ‘20 organized Foothill’s event to advocate for the necessity of gun control legislation to ensure student protection in schools. She was inspired by the “realization [that she had] the power to change things,” and is especially inspired by Emma Gonzalez ‘18, a survivor of the Parkland shooting and an activist for gun law reform.

Yale commenced the event with an introductory speech, where she thanked such a large population of the school for participating in the walkout, and concluded by demanding Congressional action.

“We gathered today in solidarity to speak for those who no longer have a voice,” Yale said.

Yale created an Instagram account and posters in preparation of the event, and worked with the Associated Student Body (ASB) to use the sound system so people could speak on the issue. According to Yale, this was something that needed to happen because more people need “to be angry and upset […] [because] people are dying when they shouldn’t be.”

Yale was surprised that such a large crowd of students and staff gathered to participate in the walkout.

“I honestly don’t know how it got this much traction,” she said. She felt the event was sort of similar to the telephone game, except the message “didn’t get warped.”

Principal Joe Bova, who had no affiliation with the event, also had no idea so many students would walk out.

Bova estimated that about half of the campus participated, and praised the students for being organized and respectful of this opportunity to have a voice.

The day was “perfectly reasonable,” he said.

To show their support for the cause, participating students carried signs with phrases associated with the movement, including “We call BS” and “Never Again.”

Several other speakers articulated their belief in the need for change, including Assistant Principal Tina Perez, who urged students to “walk up, as well as walk out.”

“Walk up to 14 students and 3 teachers and say something kind. Honor the lives of those lost by walking up instead of just walking out,” Perez said.

Chloe Hilles ‘18 urged students to be more directly involved by suggesting that “the most important thing you can do is register to vote,” and to contact California senators Kamala Harris and Dianne Feinstein, so that they can act based on student concerns.

Audrey Feist ‘20 felt that the walkout was not simply a “political facade,” but a good opportunity for students to express their opinions on a relevant issue.

Nathan Gherardi ’18 was amongst the many who believed that Foothill will “be able to make a difference.”

“We’re seeing a war going on in our own country, [and] it’s time for us to step it up,” Gherardi said.

Blythe Blakeman ‘19 is aware of the pressures that come with being students, as they are becoming the generation that will soon be making the decisions that will alter the perception of gun control.

“The people who are in control aren’t doing anything,” she said. “We’re not gonna let this world that were inheriting do what it’s doing and hurt us.”

Some students didn’t participate because they didn’t think that the walkout would accomplish anything, or would only hinder their academic career. Whereas other students did not feel educated enough about the issue to make an accurate decision on the matter.

Sean Siddens ‘20 was a student who chose not to participate in the walk out.

“I want people from either side of the issue to respond to it more rationally instead of fueled by passion,” he explained.

Michael Aguilar ‘18 did not participate in the walk out for various reasons, one of which being that he finds “it extremely disrespectful when you have a memorial service for people who have died and then basically use that as […] leverage to push an agenda forward.”

“I honestly think that these walkouts are going to have zero impact,” Aguilar said.

Regardless of whether students walked out or not, many felt the need to honor the fallen at the Florida shooting. Others, such as Blakeman, are ready to create change in response to gun violence.

“We’re behind you,” said Blakeman, in regard to those at Marjory Stoneman Douglas High School. “We’re gonna make this a movement.”

Editor’s Note: Chloe Hilles is the Managing Editor of the Foothill Dragon Press. She was not involved in the reporting or production of this article.