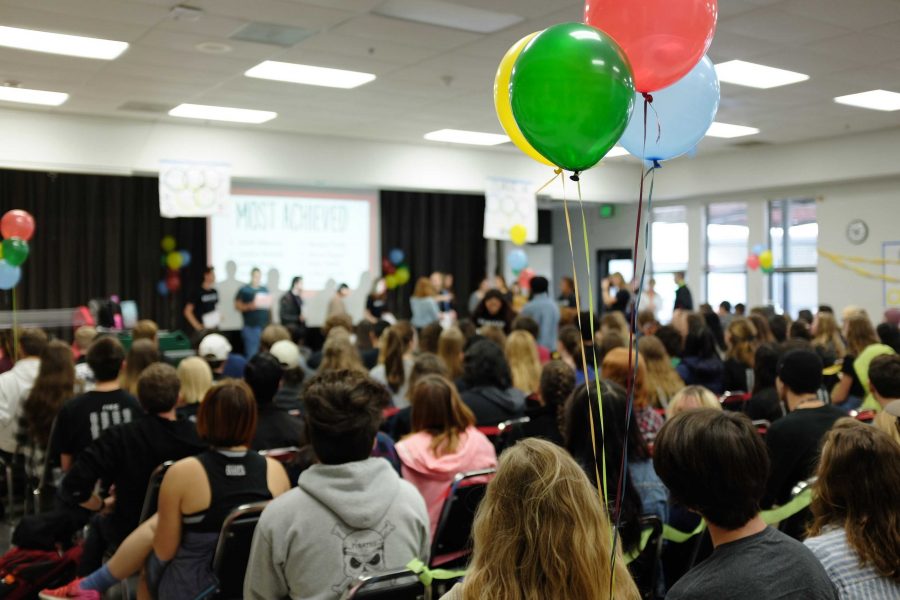 On Tuesday, March 7 enthusiastic seniors flooded into Spirito Hall to participate in an Olympics-themed Seniors Only Academic Rally (SOAR). This event, organized by the Associated Student Body (ASB), was intended to motivate seniors to have fun, be recognized and continue to work hard as they come close to the end of their final year of high school.

The chairs in Spirito Hall were decorated with Olympic colored tissue, and as seniors walked in and took their seats, they were divided into four competing teams based on what colored section they chose to sit at. The teams included red, yellow, green and blue.

This year is the first year that SOAR is entirely in control of the ASB student body, with Finish Strong Commissioner Nikki Mercer ’18 organizing the event.

ASB Senior Class President Julia Fickenscher ’18 greeted the seniors and informed them of the rally’s events. There were four games, including a challenge to eat an Oreo from one’s forehead without using hands, a candy bar unwrapping contest, a cup stacking game and a competition to shake ping pong balls out of a tissue box attached to one’s back as quickly as possible.

Between these games, awards were given out to groups of students who were nominated by teachers in eight different categories: Most Achieved, Most Improved, Most Inspirational, Most Participatory, a Hidden Treasure, Willingness to Learn, Integrity and Selflessness.

During the event, Josie Thorp ‘18 felt that “there was a lot of energy in Spirito Hall, which was awesome.”

Those who won the competitions and awards were given gift cards to places like Starbucks or Barnes and Noble to celebrate their achievement. However, Fickenscher believes that the “SOAR rally has always been less about ‘places’ or a team actually winning and more about showing school spirit.”

“The SOAR rally is so unique in the sense that it’s almost like a throwback to freshman orientation,” Fickenscher said. “You’re getting up, you’re playing games, you’re having fun.”

Aside from teacher-selected student awards, seniors were able to “invite any old staff member or teacher from any school or someone who has just been a role model to them […] to graduation” through League of Inspirational Heroes, Fickenscher said.

Once the final game was finished, the salutatorians and valedictorians were announced by Principal Joe Bova. According to ASB Coordinator Melanie “Captain” Lindsey, this year marked the most salutatorians the school ever had, with a record-breaking 14, and with a high number of valedictorians in comparison to previous years. The Class of 2018 valedictorians are Grace Morrison, Josie Thorp, Emma Zeko and Emily van Deinse. The salutatorians are Clayton Brossia, Acacia Danza, Lane Domke, Noel Domke, Chloe Hilles, Peter Jespersen, Ella Rajala, Julia Fickenscher, Sherlyn Khouvilay, Rebecca Shuere, Vineta Sondors, Jayden Vea, Wessal Esber and Tyler Herzog.

After all games concluded and all students were congratulated, the spirit of the senior class kept alive through the traditional apple cider toasts. Sean Ward, Jackie Fregoso, Travis Dabbous, van Deinse and Fickenscher all gave toasts, ranging from speeches thanking people for not judging Fregoso for playing on her saxophone at school to a joking talk from Dabbous about all of the bad aspects of senior year.

Overall, Lindsey could find only one word to accurately describe the rally: “epic.” In her 16 years of teaching, this rally was the greatest crowd the school has had.

Seniors shared these same sentiments, as they had an opportunity to bond and share school spirit with their classmates before they graduate and move on to the next steps of their lives.

Anson Tan ‘18 will miss “the people and teachers” the most.

“I feel like everyone is so close and we all know each other,” Tan said. “It’s kind of like leaving a really big family.”

“I’ve really gotten to see everyone bond so closely, and because we are so spirited it was super fun to watch everyone get really into these silly ‘minute to win it’-style games and just enjoy these moments together as we start to embark on our journey towards graduation,” Fickenscher said.

Editor’s Note: Julia Fickenscher is a member of of the Foothill Dragon Press. She was not involved in the reporting or production of this article.