Boys’, girls’ basketball both fall in final round; place second in respective division 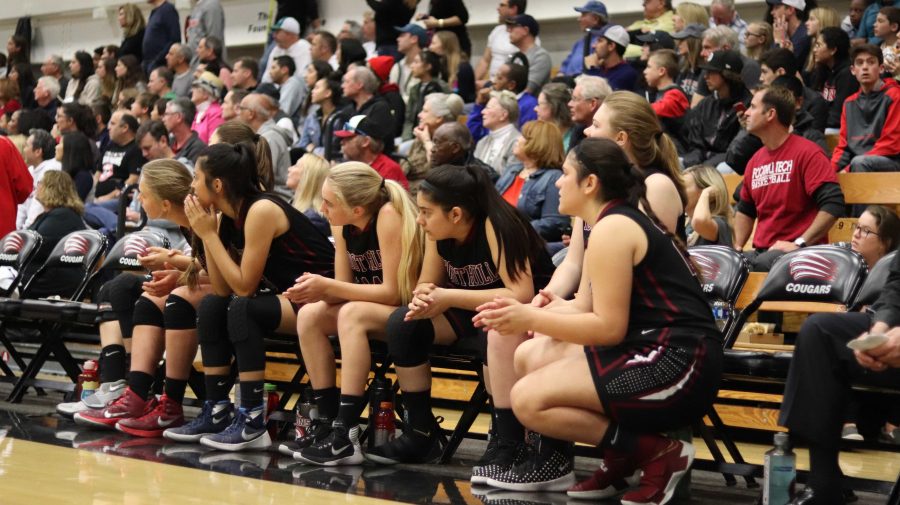 The girls watch their teammates from the sidelines. Credit: Riyanna De La Rosa(used with permission)

Although the end result was a loss for both squads, the teams had set an outstanding precedent for the budding sports program at Foothill. The fact that it had taken only four years for the boys’ and the girls’ teams to reach the CIF Finals while playing among the already-established heavyweight programs is largely represented by their abilities, leadership, and stellar progression. Head coaches Dean Prophet and Jason Edgmond had helped the teams perform to the best of their abilities; and although they fell short in the championship games, Prophet and Edgmond were the ones who had laid the foundation for success in the first place.

With their accomplishments this season, both teams earned a spot in the 2018 CIF State Tournament. As well as this, both teams will likely be moved up from their current divisions as a result of participating in the CIF Finals.

Here are the recaps from Saturday’s games:

The boys’ varsity basketball team was pitted against the Nobles of Nogales High School. Entering the tournament, Nogales was the number-one seed in their region. Meanwhile, Foothill was seeded third in their quadrant.

It was three-point shooting that eventually led to the Dragons’ downfall in this one. The Nobles’ accuracy from deep combined with various scoring runs kept Foothill out of reach in the Division 5AA championship game.

Vallance, the Dragons’ starting point guard, reflected on the season and remarks that “it’s crazy to think of how far we’ve come as a program.”

“It means a lot to make it all the way to the CIF finals,” he said. “Just a few years ago we only won a few games and finished at the bottom of our league, so it’s really cool to see how much we’ve improved.”

The first two quarters were dominated by Nogales as the Nobles put up 36 points in the first half compared to Foothill’s 15 points. Nogales carried their dominance into the third quarter and when the fourth quarter arrived, the Dragons found themselves down by 22 points.

In an effort to halt the Nobles from running up the score even further, the Dragons began to foul heavily in the fourth quarter. The Nobles attempted 50 free throws in the game, with the majority of those coming in the final quarter.

Foothill’s strategy worked nicely in the late stages, as they were able to cut Nogales’ lead to as little as ten points. But even with the Nobles only converting on 26 of their 50 attempts (52 percent) from the charity stripe, it was not enough to make up the large deficit that had been created in the early stages.

In a game that they led from start to finish, the Nobles prevailed over the Dragons with a final score of 78-65 and were crowned CIF Division 5AA champions.

Dale Batac ‘19 of Nogales led all scorers with 30 points, including five of nine from beyond the arc and shooting nine of 14 from the free throw line.

In regards to the upcoming state tournament, Vallance stated that “we’re just trying to forget this game and focus on the next one.”

“We still have basketball left to play, so we are going to do our best to make this season last as long as [it] can,” he said.

Two evenly matched teams. Two teams that had been pushed to the limit throughout regular season and the playoffs. Only one, however, could be named CIF Division 4AA champions. On Saturday, it was the girls’ varsity basketball team taking on the Eagles of Brentwood School, where both teams were volleying for the coveted first place plaque.

The Dragons dominated early and often inside the paint, but the Eagles were able to shoot their way back into the game. Although down late, Brentwood was able to hang around and deliver a series of small blows to cut into the Dragons’ lead. Eventually, the knockout punch stunned the crowd at Azusa Pacific University’s Felix Event Center. Foothill’s championship push had been halted in the final seconds in what was a devastating loss.

Foothill jumped out to a 14-5 lead over the first quarter of play, where Cydnie Gutierrez ‘19 made her presence felt early with five points. The Eagles were able to get back within striking range in the latter portion of the first half, and the teams entered halftime with the Dragons leading 24-20.

After the third quarter, the game remained very competitive, as the Dragons’ lead had been cut to three points. The fourth quarter, however, was where Foothill appeared to have taken the reins for good. After a layup from Abby Bova ‘19, the Dragons’ lead was stretched to 10 points with three minutes remaining.

The Eagles pecked away slowly at the lead, which now stood at six with 1:43 left. Gutierrez made a free throw to extend the Dragons’ lead to 7 points with 1:28 left to play. Then, Brentwood made their move.

The Eagles closed the gap quickly with a jump-shot and three free throws. The Dragons’ lead now stood at 52-50 with 20 seconds left. Forced to foul, Brentwood sent Katie Bova ‘19 to the free throw line. She made one-of-two to give Foothill a three point lead.

With 3.7 seconds left to play, Sammy Wadler ‘21 hit a game-tying three-pointer from the right corner. The Dragons inbounded the ball in an attempt to get a last-second shot, but Wadler was able to break up a pass, grab the ball, dribble to just outside the key on the left side and throw up a game-winning floater. In a matter of seconds, the tide had turned and Brentwood found themselves on top when the buzzer sounded and their desperate shot fell through the net, earning them a CIF Division 4AA Championship.

The Foothill girls will look to focus their attention on the 2018 CIF State tournament, as they automatically earned a bid by appearing in the CIF Finals.