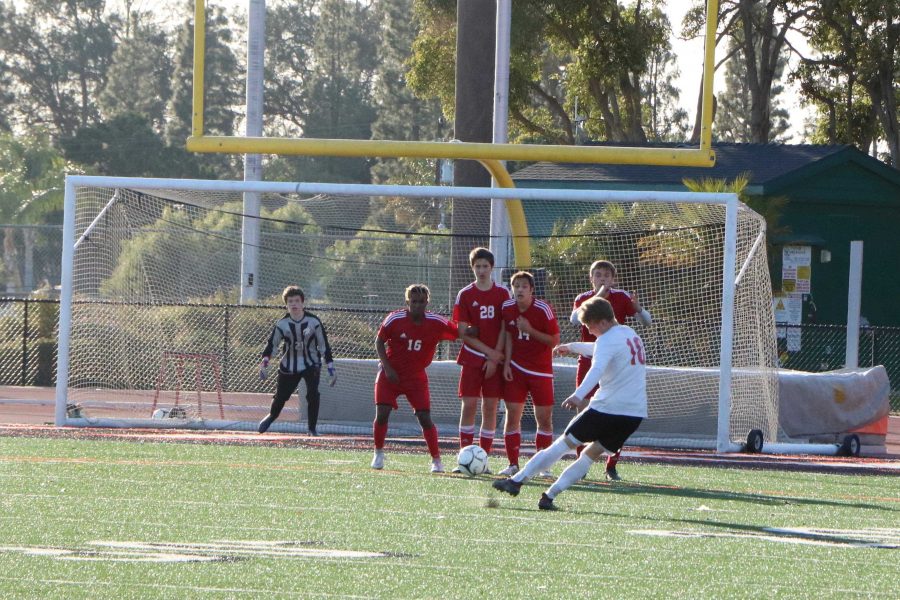 The crowd was buzzing with excitement as the sun set at Ventura College and captain David Hill ‘18 took the final penalty kick to win the game. The Foothill Technology High School Dragons conquered the Buckley Griffins 7-4 in penalty kicks on Saturday Feb. 24.

Sam Valdez ‘20 scored the first goal of the match after a give and go pass with Max Turville ‘21 in the 26th minute of the game.

The Dragons’ game picked up speed after the goal but it was the Griffins who would score next off a penalty kick due to a foul in the box by center defender Josiah Jorden ‘20. Foothill regained their lead after Hill scored on a strong corner shot with less than two minutes left in the half.

The Griffins started the second half with a bang when Bobby Manella ‘19 scored a goal in the 39th and 37th minutes of the game. Coach Andreas Wedderien stated that the first goal “caught the Dragon defense by surprise” and the second only “[made] matters worse.”

Foothill picked up speed again when Kyeler Brant ‘20 scored in the 35th minute due to a “great individual effort” according to Wedderien.

The game remained a 3-3 tie despite a great effort and near finish on a bicycle kick by Elo Contreras ‘20 with four minutes left in the game.

The Dragons then went into sudden death overtime, meaning the next team to score a goal would win the match. But despite their best efforts, they were unable to score and finish the game.

The fate of the team’s season was left to penalty kicks and Foothill keeper Luke Shadden ‘21 started in the goal. He blocked the first shot and the Foothill fans were elated but they anxiously waited for the next shot.

Calvin Turville ‘19 was successful in his kick and the Dragons gained a 1-0 lead. The following shooter for the Griffins scored as well bringing it to 1-1.

Brant was up next for Foothill and he also scored his penalty kick and the pressure returned to Shadden. Shadden was again successful on the save and gave Foothill a promising 2-1 lead.

Shadden described stopping the Griffins’ shots as “one of the best feelings because [he] know[s] everything’s just like sitting on [his] back and then [he] make[s] the save and it all goes away.”

Max Turville finished his opportunity and so did the following Griffin player, leaving the game winning kick to Hill.

Hill scored his penalty kick resulting in the advancement of the Dragons in the California Interscholastic Federation (CIF) tournament and the elimination of the Griffins. Hill stated that “it felt good just to score” but the team’s greatest strength was “playing until the end.”

The Dragons will participate in the CIF semifinals on Tuesday Feb. 27 at 5 p.m. at the Ventura College Stadium.