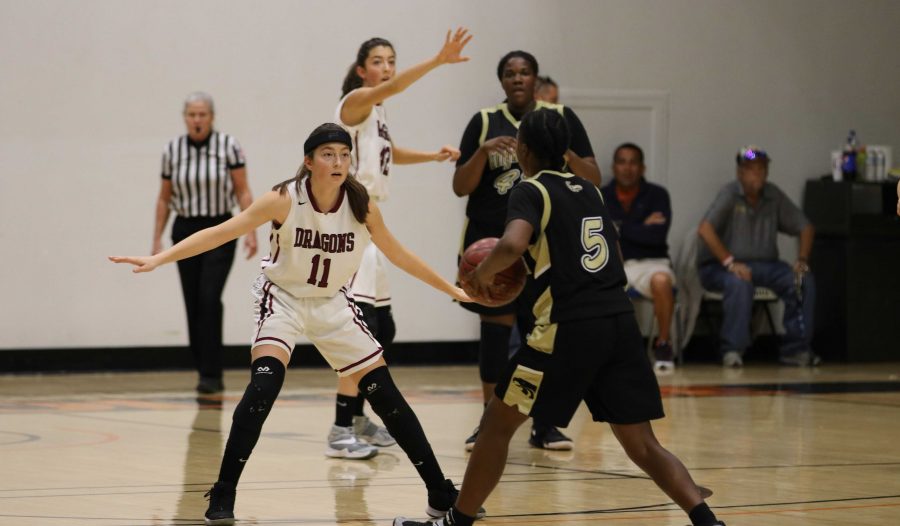 With a trip to the California Interscholastic Federation (CIF) Division 4AA title game on the line, the girls’ varsity basketball team put it all on the line in front of the home crowd at Ventura College.

“Putting it all on the line” can greatly describe what Abby Sourwine ‘19 achieved in the game. She logged 12 minutes, went two-for-two from the charity stripe and even had the highest plus-minus on the active roster (+21). She managed all of this despite coming off a broken wrist, which she suffered only weeks ago and needed a brace in order to play.

Cydnie Gutierrez ‘19 noted that Sourwine “added a whole new element to the game [that] we haven’t had the past couple games.”

On Saturday, Feb. 24, the Dragons played host to the Knight Hawks in the semifinal round of the Division 4AA tournament. Foothill got outplayed inside the key in the early stages of the game, but defensive adjustments helped them cruise to a 62-49 victory over the Hawks.

Abby Bova ‘19, Katie Bova ‘19, Maddie Ozbourn ‘19, Gutierrez and Emiline Bova ‘19 constituted head coach Jason Edgmond’s starting lineup. It was all Hawks in the opening minutes as a few fast breaks propelled them to an early five point lead. However, the Dragons’ offense started to function once Emiline Bova and Katie Bova scored for Foothill and eventually knotted the score at nine. Two threes by Gutierrez and a three-point play from Abby Bova had Foothill up 18-12 by the end of the first quarter.

That six point Dragon’s lead evaporated quickly over the course of the second quarter. At one point, Knight scored eight unanswered points before Emiline Bova halted the rally with a bucket. Nonetheless, the Hawks were beating the Dragons to loose balls, making excellent passes and converting on fast breaks; all of which resulted in a 27-24 Hawks lead at halftime.

Edgmond commented that “we just didn’t shoot well” in the first half. Meanwhile, changes needed to made on the defensive side of the ball as well. According to Gutierrez, the switch from man defense to zone made the team “a lot more aggressive outside […and] intensity- wise it helped.”

Knight picked up right where they had left off in the second half, pushing their lead to seven points. However, the Dragons engineered a 13-0 run over the next four minutes and took a 42-36 lead into the final quarter.

The Hawks had no answer for Foothill’s high-powered offense throughout the entire fourth quarter. It was a mid-quarter 13-2 run by the Dragons that eventually pushed them over the top, and Knight failed to get within ten points over the remainder of the game. The Dragons had earned their first CIF finals berth in school history with their 62-49 win.

The Dragons’ leading scorer in the game, Gutierrez, finished with 21 points, including five-of-seven from beyond the arc while logging 32 minutes of playing time. She attributed her stellar performance to being “more relaxed” and “just let[ting] the ball go.”

Friday, March 2, marks the date of the Division 4AA Championship game. The Dragons will be pitted against the Eagles of Brentwood School, and the game is currently scheduled to be hosted at a neutral location.

Edgmond said that it “feels good” to advance to the final round, but “it’ll feel better if we win.”

Editor’s note: Abby Sourwine ’19 is a staffer in the sports section. She was not involved in the production or publication of this article in any way.