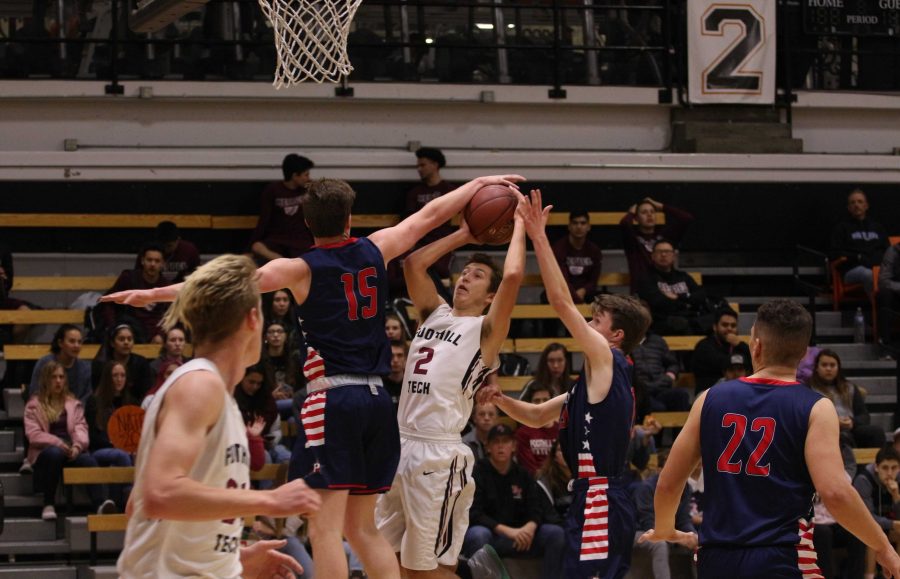 When Nate Bova’s ‘19 three pointer rolled around and off of the rim, people thought it was over. Students began to lower in their seats, parents let out despondent “aw,” and fans of the opposing Providence Patriots started to grin. That is, until Trey Jackson ‘18 leaped into the air, grabbed Bova’s rebound, and powered it back up through four defending arms. His shot went through the net with the buzzer to end the fourth quarter with a menacing score: 66-66.

Thus was the back-and-forth nature of Foothill’s Tuesday night matchup on Feb. 20. With the competition heating up as the team progresses in the California Interscholastic Federation (CIF) Division 5AA playoffs, this quarterfinal game proved to be demanding.

Luckily, the team “believed in each other as teammates and listened to our coach,” as Jackson put it, “and it worked.” With their 73-68 win over Providence, the Dragons advance to the semifinals on Feb. 23.

Unlike their previous two playoff games, the Dragons trailed by six points at the end of the first quarter. Bova scored the first basket of the game, but Providence quickly answered with two three-pointers and a layup.

Cameron Strain ‘18 drove for a layup to close the gap, but the Patriots added five more to the board. Bova, as well as Jack Vielbig ‘19, each scored a three, and Strain and Colin Vallance ‘18 scored layups, but their contributions weren’t enough to take the lead.

Providence was led by Nick Butler ‘18, who scored 12 of the team’s 17 first quarter points.

Butler continued to head the Patriot’s scoring efforts in the second quarter, but Foothill stepped it up to shrink the lead.

The teams traded baskets throughout the second, with just a few extra points by the Dragons. The scoring started with a three from Vielbig, followed by two layups from Vallance and three from Bova on Foothill’s end. For Providence, two three pointers and a put back left the score at 30-24 midway through the second.

Foothill continued on in the game of catch-up, with a hustle play leading to a bank shot for Jackson. Butler of Providence nailed another 3 and his teammate scored a layup to bring the score up to 33.

Bova finished up the quarter with a three pointer, and an and-one to end the quarter. Bova’s contributions left the Dragons trailing 34-35, the smallest deficit since their 2-3 trail in the first minute.

At the end of the third quarter, the Patriots led by the same amount. Each team scored 13 points, Foothill’s coming from Strain, with two jumpers and two free throws, Vallance, with a fancy layup, Bova, with a three pointer, and Jackson, with a power layup.

Strain gave the Dragons their first lead since the first quarter with a reverse layup on the first play. This lead was short lived, as Providence scored a layup off a euro step the next play.

Strain hit a three pointer, and Providence scored a three of their own to continue the streak. Then Foothill went on their run. With two layups and a free throw, the Dragons took a four point lead, their biggest of the game.

Both teams kept up the intensity, and the score read 61-61 with three minutes left in the fourth quarter. Providence and Vielbig each hit a three pointer, then Providence took the lead with a mid range jumper.

After a jump ball, the Dragons called a time out with just five seconds left. They trailed by two. It was now or never.

When Jackson grabbed the rebound, he was simply thinking “make it.” With Jackson’s put back, the game went into overtime.

In overtime, the Dragons would hold the Patriots to just two points, and score seven of their own to seal the deal.

After three years in a row of losing a close game to Providence, the Dragons “finally got them,” as Prophet said. With the 73-68 win, the Dragons will head to the semifinals on Friday, Feb. 24.

Prophet is hopeful that if the team “can get recovered a little bit and play well Friday night, I think we have a chance to make it to next Friday,” the CIF finals.

He’s excited that “they can be the first team, on the boys’ side that goes to CIF finals.”

“This is their legacy now,” he said.

Correction: An previous version of this article stated that the next CIF boys’ basketball game would occur on Dec. 23. This has been corrected to Feb. 24.