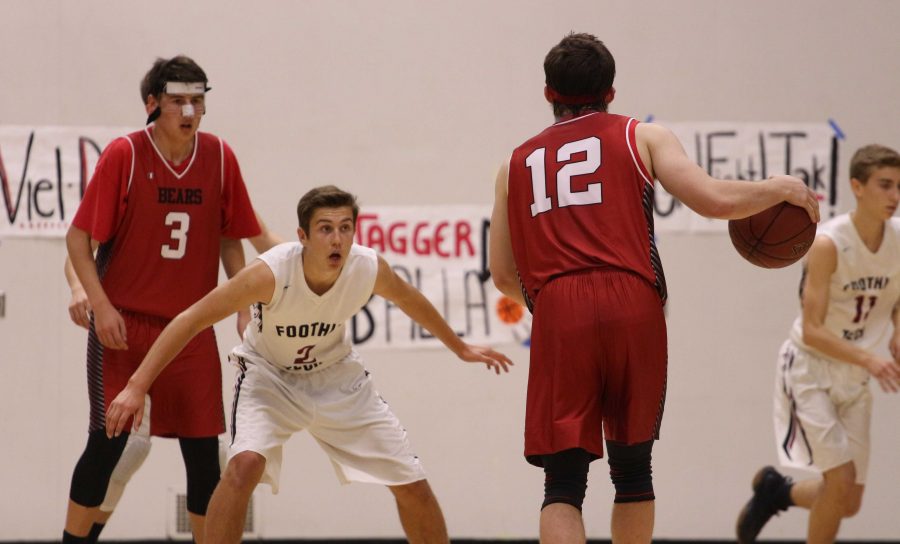 Foothill Technology High School’s students may have had the day off from school, but its boys’ basketball team still had work to do on Friday, Feb. 16. The Dragons faced the fourth ranked Big Bear Bears in the second round of the California Interscholastic Federation (CIF) Division 5AA playoffs, and though they may have felt “jipped in the seedings,” as assistant coach Anthony Unchangco said, they rose to the occasion with a 72-63 victory.

From the first quarter, it was clear that the team “wanted to get the win,” as Nate Bova ‘19 put it. “It could have been the last game for the seniors if we didn’t so we had to come out strong.”

“Come out strong” may be an understatement for the Dragon’s first quarter performance. They went on a 19-0 run in the first seven and a half minutes, led by Bova and Cameron Strain ‘18. Bova scored eight of the 19 points, with two three-pointers and a floater, and Strain accounted for the other 11, with three three-pointers and two free throws.

Big Bear’s Danny Stiles ‘18 snagged the ball off of Bova’s block to score the Bear’s first basket of the game, but Bova kept Foothill’s spirits high with a free throw ten seconds later.

Hunter Francis ‘19 scored Big Bear’s only other five points in the quarter with a three and two free throws, but Colin Vallance ‘18 of Foothill got the last word. His two-footer secured a 22-7 lead at the end of the first.

Trey Jackson ’18 attributes this quick start to the excitement that comes from CIF, saying the team was “definitely high in spirits.”

“When we’re all playing together for each other and really in the game, we have lot better of a game,” he said.

The second quarter cut it a little closer. Foothill didn’t assume total scoring dominance, and rather traded baskets with Big Bear, maintaining but not expanding the lead.

When Strain hit a step-back jumper, Big Bear’s Francis hit a shot in the key. Big Bear makes three free throws, Bova nails a floater, and so on. This trade put Foothill up 39-23 at the half.

While the scoring was spread evenly by team, it was not spread by player. Bova and Strain were clear standouts for Foothill.

Of the 39 points scored by Foothill in the half, Vallance scored four. The rest went to Strain, with 15, and Bova, with 20.

Despite the hot hand, Bova said he “didn’t feel like I was on fire or anything.” He simply “made my shots here and there and scored a lot, I guess,” he said.

Strain and Bova continued to carry the team through the second half, but Big Bear came alive in the third quarter to keep it interesting.

By the time Vallance made the first Foothill basket of the quarter, Big Bear had brought the lead down to nine points, and continued to chip away. With big contributions from Nathan Randle ‘18, with six, Francis and Stiles, each with five, Big Bear outscored Foothill in the third quarter with a 21-15 run.

They trailed by just ten points at the end of the third.

Unchangco noticed that “some of our shots inside weren’t falling in for us” in the third quarter, which affected the team because “we’re a shooting team, so if we’re not shooting, it’s hard for us to get in a groove defensively as well.”

Big Bear kept the momentum in the beginning of the fourth quarter, quickly hitting a three-pointer, a backdoor layup, and a free throw, cutting the lead to just four points.

Again, Bova responded with an o-board put back, but Big Bear kept fighting.

However, Foothill “got through that” slump, as Unchangco said, in the final minutes of the fourth quarter.

For the next three and a half minutes, Foothill was able to close it out. With seven points from Bova, five from Strain, and two from Jack Vielbig ‘19, they expanded the lead to nine, and secured the win.

Bova finished with 32 points, and Strain with 24, together accounting for over 75 percent of the team’s total points.

With the win, the team is “excited” for the quarterfinal game on Tuesday, Feb. 20, where they will face either Newbury Park Adventist or Providence High School, both of whom they’ve played in non-league games.

The location and time of the game is to be determined.