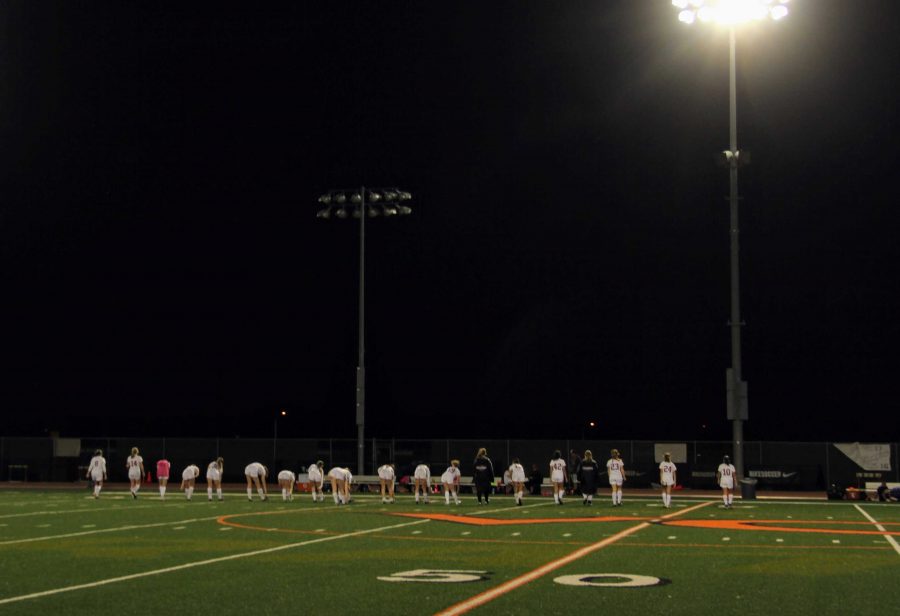 It was their first playoff appearance in two years. They had a first-year head coach. They were facing a team with significant momentum entering the game.

The girls’ varsity soccer team may have had some of the odds stacked against them entering their first round matchup against South El Monte High School on Thursday, Feb. 15. However, all of the circumstances meant nothing in the long run; for it was postseason competition.

The Eagles of South El Monte High School came flying high into their matchup with the Dragons. On Feb. 13, the Eagles topped the California Academy of Math & Science in their wild-card game.

It was the Dragons, however, who would remain in the California Interscholastic Federation (CIF) Southern Section Division VI tournament. Foothill’s 3-1 victory over the South El Monte Eagles at the Ventura College stadium ensured them a spot in the second round of playoff competition.

Following the opening kick-off, the Eagles stunned the Dragons’ defense by scoring and grabbing a quick 1-0 lead. The momentum swung back and forth over the following minutes, and Foothill’s best chance to tie the game was a narrow miss from Georgia Rowley ‘21. About halfway through the opening half, Grace Combs ‘20 found the back of the net and provided the equalizing goal. The latter portion of the first half yielded no scoring as the game remained in a 1-1 deadlock heading into halftime.

The second half opened with ten minutes of play featuring no significant scoring attempts, as both sides struggled to advance the ball. However, the Eagles seemed to have taken a 2-1 lead with a goal in the 50th minute, but it was called back due to an offsides penalty. Foothill retaliated on a free kick from 30 yards out that slammed into the top crossbar, barely missing the goal.

It was Gwynnie Redemann ‘18 who eventually pushed the Dragons over the top in the later stages of the game. With 15 minutes to play, Redemann scored the go-ahead goal. Five minutes later, she added a score for insurance purposes, as Foothill now held a comfortable 3-1 lead.

With no scoring in the last ten minutes of the game, the Dragons secured their spot in the second round of the CIF Division VI Playoffs with the 3-1 victory over South El Monte.

Head coach Jack Craig emphasized that it “feels great“ to get a playoff win in his first season at Foothill Technology and bringing the program closer to their goals.

“We’ve played all season one game at a time,” he said. “The girls did a really good job, especially since we’re playing without our leading scorer Alyssa Elias [‘19].”

Next up for Foothill is their regional semifinal matchup versus Coachella Valley High School on Tuesday, Feb. 20.

Coachella Valley secured their spot in the second round with a 4-1 victory over the University Prep Jaguars.

Redemann acknowledged the successes the team has had thus far, but she recognizes that the team can’t let up on their quest for a CIF championship.

“It’s pretty exciting. This year has been super successful for us; our coach has helped us develop as a team, but also I think the girls have just come together and we’re super tight and I think that helps with the chemistry on the field,” she explained. “We just need to continue to play as a team and keep scoring and working together.”