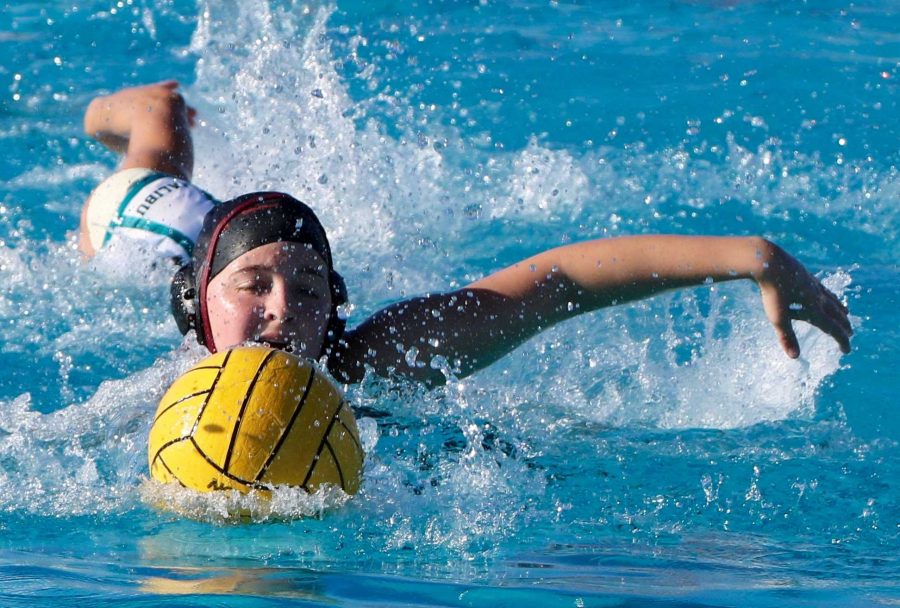 As the girls’ water polo team prepared for their matchup against the Sharks of Malibu High School on Wednesday, Jan. 31, they had not forgotten what had transpired exactly two weeks before. On Jan. 17, Foothill had traveled to Malibu to take on their league opponents, but came up short in a loss.

Head coach Ben Gossard mentioned that the Sharks scored “two quick goals on us” in the beginning stages of the previous game, which was a point of focus for the team. The Dragons defense needed to step up early and not put extra pressure on the offense to make up the deficit.

Any questions about the abilities of the defensive unit against solid teams were answered today at the Ventura Aquatic Center pool. Aside from a lapse in the third quarter, the Dragons played shutdown defense when it counted most, resulting in an 8-6 victory against the Sharks.

It was that same aforementioned Dragons’ defense that dominated the first five minutes of the contest; however, Malibu’s defense kept pace. The Sharks eventually struck first with about a minute left in the first quarter, but Foothill took the lead by scoring twice in the final minute. It was Annika Arroyo ‘20 and Morgan McKillican ‘20 who put the Dragons on the board and established a 2-1 lead.

The second quarter once again featured no scoring in the early stages of the game, prompting Gossard to call a timeout with four minutes to play in order to rejuvenate his team. It provided a spark for the Dragons in the remainder of the first half and Gossard’s strategic move paid off. McKillican scored her second goal of the game, and Sydney Roman ‘19 followed suit with a score of her own. Foothill’s lead had grown to 4-1 when the first half came to a close.

As soon as the third quarter began, Malibu began to flip the game script and claw their way back within striking range. Two scores from the Sharks cut the lead to 4-3, forcing Gossard to use another timeout. Following the short break, Foothill regained control of its cohesive offense. Back-to-back goals from Arroyo stretched the lead back out to three scores.

Malibu answered with a quick score and threatened to do even more before the biggest momentum swing of the game. The Sharks collected a Dragons’ turnover and had a breakaway opportunity on goal against goalkeeper Taylor Wreesman ‘18. However, they didn’t capitalize, and Jocelyn Thorp ‘18 promptly responded by scoring and halting the Sharks’ momentum. What could have possibly been a one goal Dragons lead had now grown into a 7-4 advantage by the end of the third quarter.

Malibu’s aggression to open the final quarter helped them score twice, putting their total at six goals. It would prove to be irrelevant, as Arroyo’s fourth goal, with one minute remaining, iced the game and helped Foothill solidify an 8-6 win.

Gossard, while praising his team’s effort, also noted that the win “is a confidence booster” and hopes “it carries over” into the next few weeks of the season.

“This is the best we’ve played and put a whole game together [this season]. The defense has not been an issue all season; we tweaked a couple things and fixed a few things that we knew Malibu would come out with,” he said. “They’re fast, and they look to counter, so we were just very aware of that and stopped them. The way we were composed [in] that game was the best we’ve been all season. We were ready for this game.”

In a game that had been highly anticipated among the team all season long, Maizie Anders ‘18 is proud of the results the team produced.

“We came in and there’s a lot of different mentality that goes into it, a lot of nerves, but I think it makes us feel a lot more capable than we did before this game,” she said. “We were doing moves and staying on top of players. It definitely makes us more confident and we’re not going to flop when [California Interscholastic Federation (CIF) playoffs] comes around. I think we’re genuinely excited for what’s to come.”

Foothill’s next challenge arrives this weekend in the Los Altos Varsity Conqueror Classic tournament on Feb. 2-3., which will be hosted at Los Altos High School. Even among solid competition, Gossard believes in his team’s abilities to play well in the tournament, saying that “if we show up and we play, and we keep our composure,” winning is always a possibility.