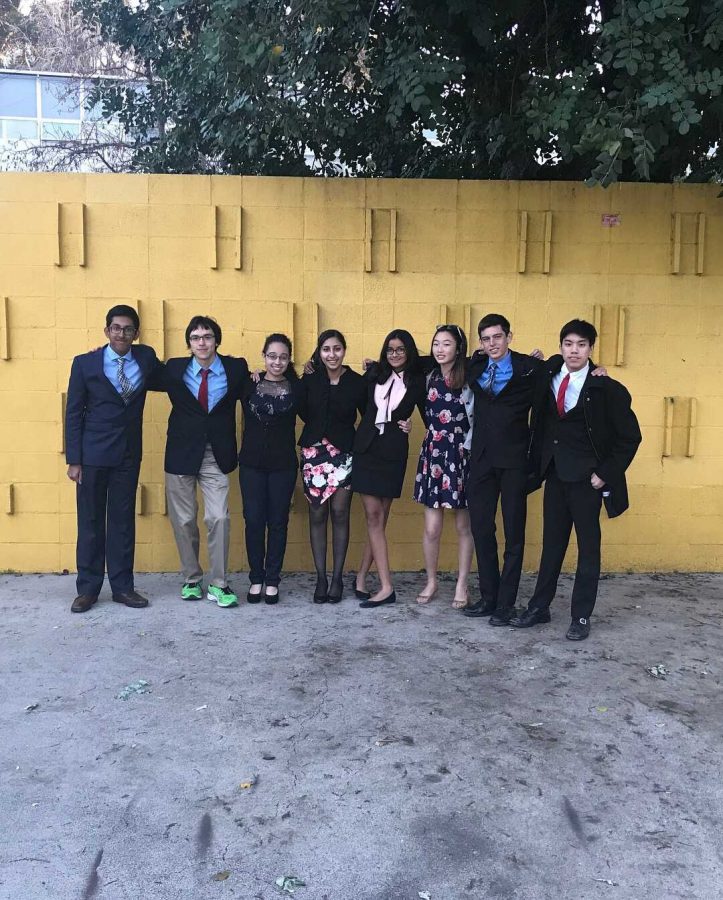 Some debaters at the recent competition. Credit: Darren Wu used with permission

The debate tournament against the teams of Oak Park and North Hollywood this past Saturday held some “interesting”victories and surprises for Foothill’s Speech and Debate team. Darren Wu ‘19 and Bryan Sturm ‘19 came away as undefeated, scoring a 3-0 trophy. Partners Kayla Austin ‘18 and Bijana Garcia ‘18, Raine Hagerty ‘19 and Ryan Sequeira ‘19, and Jocelyn Brossia ’19 and Andrew Shoup ’18 received 2-1 certificates.

The January Public Forum resolution debated was as follows: “Resolved: Spain should grant Catalonia its independence.” Considering the significant amount of school and practice the debate team has missed due to the fires, Austin and Wu thought that their teams performed very well.

Austin said that the time away “forced everyone to put a lot of time and energy into getting back to the level at which they were debating previously.”

Though both students said the event proceeded well, Wu recalled the difficulties he faced when his team’s opponents used “illegal framework.”

Changing the definition of “independence,” the opponents altered the argument and accordingly made “it very confusing to debate.”

“It was extremely frustrating to deal with as the debate turned into arguments about [the] definition,” Austin said. “But I think all of our students handled the issue really well, and I know we were not the only school who was upset about it.”

Despite the issues, Wu still appreciated the highlights of the tournament. He knew that though the team did well, they had room for improvement, since “the first two rounds went well but not the third.” However, Wu was proud that he and his partner “managed to pull through with a very unexpected three wins”

Austin also stated that when it comes to the competition, the atmosphere and community are suspenseful and “very competitive.”

For those who enjoy the same thrill, she advises for “anyone who has ever thought about joining the debate team [to] step out of their comfort zones and join next year.”