Satire: Opening up the shutdown 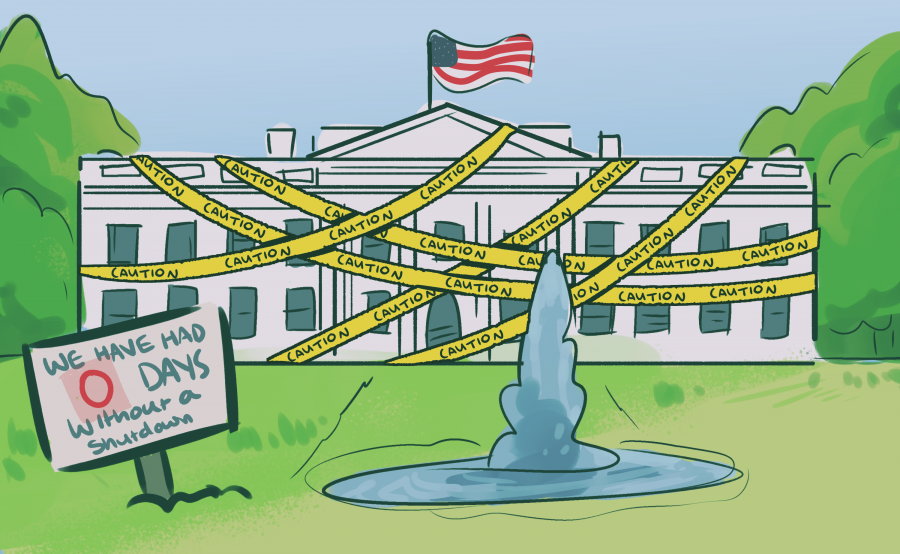 James Madison once wrote “if men were angels, no government would be necessary.” Well, my fellow esteemed Americans, it’s time for jubilant celebration for we are now angels! The government has shut down, and although it doesn’t equate to your parents being gone on a business trip and your house transforming into a palace for anarchy and debauchery, it does mean they won’t be doing their job unless you do something truly illicit that elicits their “essential services.” Also, you might not be able to make that national park visit, but hey, no Internal Revenue Service (IRS)! We truly have ascended to heaven!

So, now that I’ve achieved angeldom, I’d like to shift my attention to the government as a whole. I’m going to give my sage and sacred advice to the people we put in place to be in charge of us, who currently are not. Clearly, government needs to be governed, since said system installed to keep us from shutting down as a nation quit on us.

Preceding my angelic wisdom, let’s acknowledge that we’ve reached a momentous milestone: you…spry…folks in government have turned a whole one year now, which means that you are all finally capable of handling the tribulations of the real world. That first year of existence was just to stretch your legs.

Now, today I will teach you how to manage several aspects of life that require internal unification and a strong will to muster, so that you may one day be indomitable when human nature crawls back and forces our return from heaven.

Lesson one: the art of dealing with deadlines

Life has many arbitrary time limits we’ve burdened ourselves with owning, but you have to honor them. However, my divine insight shows we also value creative thinking in place of epoch-making achievements, so think outside the box and push that deadline back. Let’s say you run into the trivial issue regarding how to apportion funding for the government. Wise leaders would know not to be burdened by such imaginary restrictions. Just use what was working well before, give it a new polish and keep rolling with it. Why anyone would want to make solutions for the long term is beyond me! Confronting your predicaments temporarily not only deals with the matter in the immediate, but keeps the pressing matter refreshed in your agenda, so you’re always alert. If you install continuous resolutions, then your resolve will be equally as continuous, will it not?

Lesson two: the art of dealing with disagreement

I understand that you’ll all be surprised to find that people, for whatever strange reason, will not always see eye to eye with said resolve. “If it ain’t broke, don’t fix it,” but if it ends up breaking, the “fixing” half is probably faulty too. So, do the responsible thing and blackmail your dissenters in hopes that they back off. Promise them something valuable in your bills. Something encrusted with the very salt you ravenously desire to see twinkle in the trickles of their sweat. How about a measure on potato CHIPs? Or just make healthcare a political snare for the opposition, especially if it involves children from low income families. They’d be heartless to reject your altruism, further cementing your good will in running our government.

Final lesson: the art of dealing with disapointment

I’d like to impart the holiest of advice: know when to give up. Sometimes, you’re the minority in government, but luckily making a bill is like building LEGOs: it takes forever to complete and easily falls apart after so much progress.  We can’t even decide what food analogy to give it: sausage that’s better to be oblivious on how it’s made, or a pie that everyone wants a slice of. So keep in mind that you can always cast them to die in committee, or just be the Senate. Either one will stop the legislative branch from doing their job.

But as a last resort, just shutdown. If you can’t win an argument, then they shouldn’t win either. Who needs collaboration and debate to work through dilemmas when you can seize a political Pyrrhic victory? Good leaders need to show resilience and determination, and letting yourself lose so that the opposition suffers as well is the ultimate show of these traits. A noble sacrifice, if you will. I know that if I get into an argument I can’t win, I just shut the conversation down. Voila! The issue has vanished from my life! Problem solved! You could shut yourself down, you could shut them down—heck, you could even shut the federal government down! Of course, that’s only an extreme, one that’s only occurred nine times in our nation’s history.

Anyway, I just remembered that state governments still exist and therefore, we aren’t actually angels. Still, I think my advice will be most beneficial. Heed it, and you shall bring momentous change to the federal government moving forward in the same spot.