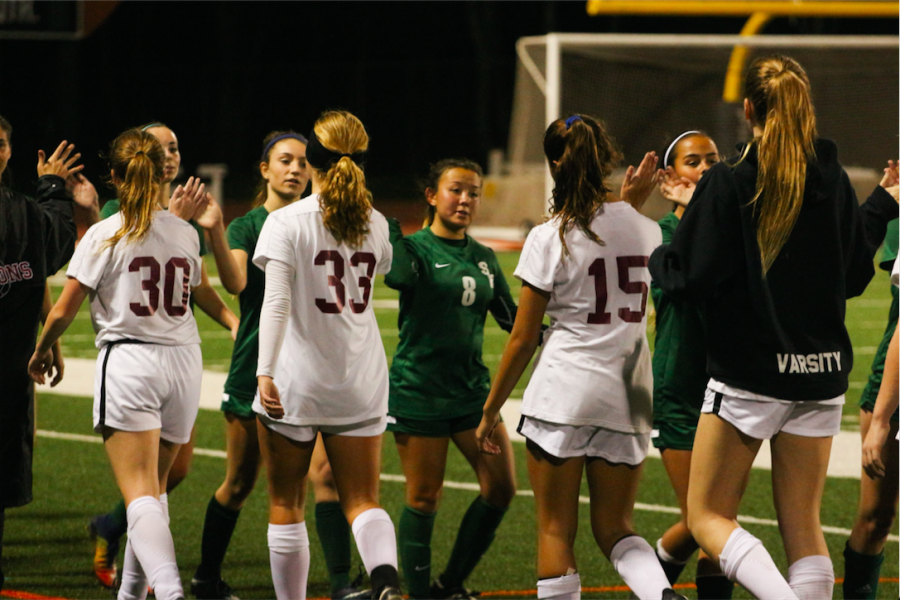 The Dragons and Seraphs exchange high-fives after a 5-0 win for the Dragons. Credit: Jason Messner / The Foothill Dragon Press

Friday, Jan. 19, marked the date of the Foothill girls’ varsity soccer team’s tenth game of the 2017-18 campaign. Entering the game, the visiting Seraphs of St. Bonaventure High School were winless on the season. Thanks to solid play by Foothill in all facets of the game, St. Bonaventure will have to wait another game to earn their first victory. Under the lights at Ventura College, the Dragons handily defeated the Seraphs with a final score of 5-0.

Following the opening kickoff, the Dragons dominated time of possession in the early stages of the first half. Foothill fired six shots on goal within the first twenty minutes, all of which missed the mark. Meanwhile, the Dragons’ defense helped lighten goalkeeper Hailey Villano’s ‘19 workload in this time frame, as Villano saw no shots to the goal come her way. It would take approximately 26 minutes before she recorded her first save.

With 16 minutes and 20 seconds left to play in the half, the Dragons struck first on a corner kick that landed in the middle of a chaotic penalty box and eventually trickled into the net for the score and the 1-0 lead. In the two minutes of stoppage time, Foothill doubled the lead with a goal by Alyssa Elias ‘19. Nothing else transpired in the rest of the half, protecting the Dragons’ 2-0 advantage heading into halftime.

It didn’t take long for Foothill to regain their previously established momentum. Kat Brandi ‘18 put the first bit of pressure on the Seraphs’ goalkeeper with an attempt within the first two minutes. Elias followed with a narrow miss over the top crossbar. It was Grace Combs ‘20, however, who found the back of the net open, scoring seven minutes into the second half. With 24 minutes to play, Kiera Rivera ‘21 tallied another Foothill goal, extending the Dragons’ lead to 4-0. Elias followed suit just one minute later by scoring her second goal of the game, solidifying a five goal advantage. After the final 20 minutes of the half, which didn’t feature any goals, the Seraphs and Dragons shook hands and both headed back to their respective benches. It would be the Dragons who were heading back with a win under their belt, however. As time expired, the scoreboard read 5-0 in favor of the home team.

Following the victory, head coach Jack Craig acknowledged the fact that the Seraphs were undergoing a “rebuilding year,” but he put the circumstances aside and was complimentary of both teams.

“[The Seraphs] didn’t quit. They had a lot of fight in them tonight,” he said. “But I was really happy with [our] team because it wasn’t just about the score, it was about the way they played. They played as a team, they shared the ball, and they worked hard.”

Villano was also emphatic about her team’s performance, saying that the win “definitely” provides a morale boost while adding that “everything was just really solid.”

“I’m really excited with how our team is playing right now,” she continued. “I was really happy that we stepped up and played our game.”

With the win, the Dragons improve their overall record to 4-5-1, while advancing to 3-0-1 in league play.

Foothill and St. Bonaventure will square off for the second and final time this season on Monday, Feb. 5. The game will be hosted by the Seraphs, where the Dragons will look to improve their subpar 1-4 mark in away games.