Kurt Miller: “If I wasn’t at water-polo or swim practice, I was at the beach.” 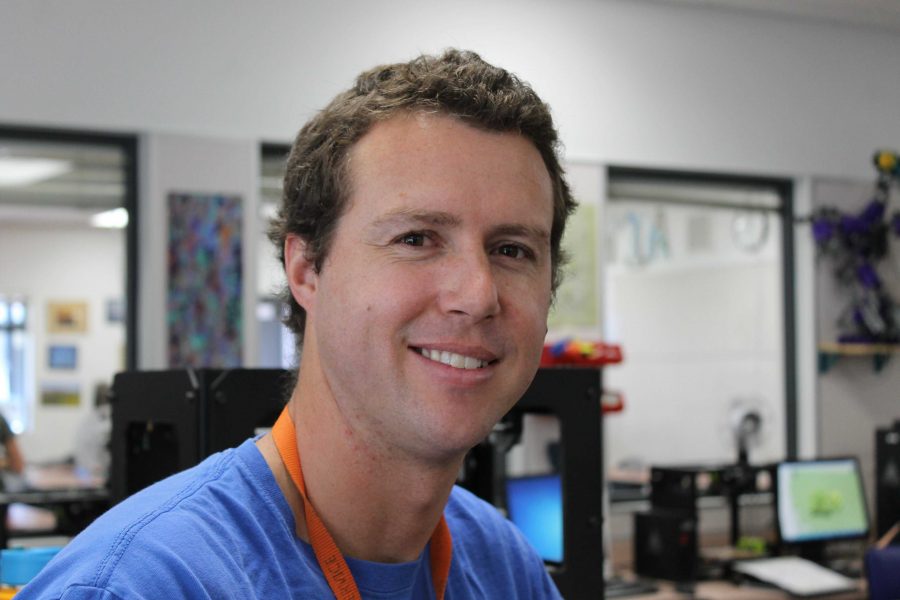 Teacher, Design-Technology (D-Tech) coordinator and avid surfer, Kurt Miller has had many jobs, ranging from kitesurfing instructor to commercial fisherman, but his optimism and ambition in inspiring his students can justify that he was born to be a teacher.

Perhaps foreshadowing his D-Tech filled future, young Miller spent his days after school playing with blocks and legos. While waiting for his parents to pick him up from his Aunt’s house in Pacific Beach, Miller would spend time building blocks from “the ground to the ceiling”.

At about age 11, Miller transitioned from boogie-boarding to surfing, a hobby that would not leave his life anytime soon.

Before going to University of California Santa Barbara (UCSB), where Miller not only got his undergraduate degree, graduate degree and teaching credential, but also picked up kite-surfing, he attended Mission Bay High School (MBHS).

As a student, Miller focused on surfing, swimming and water polo. Outside of being a “closet nerd,” he did not choose to venture to ‘on shore’ activities.

“I was pretty single-minded about surfing, I mean like any adolescent male, I played video games too,” Miller said. “I was a closet nerd I guess, or I just thought I was in the closet, maybe everyone else thought I was a nerd.”

While attending MBHS, Miller admitted he was not as school-spirited as he is now about Foothill Technology High School (FTHS), meaning that he didn’t participate in associated student body (ASB) or other activities in that spirited category.

Miller estimated he joined four clubs, but was did not attend enough meetings to say that he was involved in them.

“Like [California Scholarship Federation] CSF, I was apart of the club and I paid the dues, but I only showed up every once in awhile,” Miller admitted “I would say most of my time was dedicated to water polo, swim and surfing.”

Even though Miller is working his dream job currently, in the past, he was fairly against being a teacher. He started out wanting to be an engineer or architect.

In a story he tells all of his students, Miller explains that his dreams of being an engineer were crushed because he did not take his math classes as seriously as he wished he did. By making this mistake, he closed the door on many career opportunities.

Upon realizing this, Miller knew he had to shift gears and instead focus on humanities. Up until graduate school, he thought he was going to be a professor, until he realized that “it’s the teaching that [he] like[d] to do and not the hardcore research on one particular subject.”

“You probably notice I do a lot of random things, I think I‘m just sort of curious about all sorts of stuff, from 3D printing to the Third Reich,” Miller stated.

Some of the credit for Miller’s career choice goes to his parents.

“My dad always told me, […] that he was really meant to be a teacher, but was concerned about money, so he went into the business world,” Miller shared. “I think that somehow planted itself in the back of my mind, if I like to teach other people, I should go into teaching.”

Early in life as an “arrogant adolescent male,” Miller denied the fact that deep-down he always loved teaching. It wasn’t until 5 or 6 years ago when he spent a period of his life on a 32-foot boat with three other men, fishing for salmon in Alaska, where he realized that he should do what he loves.

Like every human, Miller agrees the inevitable checking Twitter or Instagram for about 20 minutes is the usual boredom solution. When he craves productivity, he retires to his garage where he begins to build something, which kickstarts him into a different mood.

Miller describes his motivations starting with “distracting myself doing something productive that I like to do, then that can segway into something that maybe I don’t want to do like pay some bill, but at least I got off the couch and stopped checking Instagram.”