Rick Villano: “If you find a job you love, you’ll never work a day in your life” 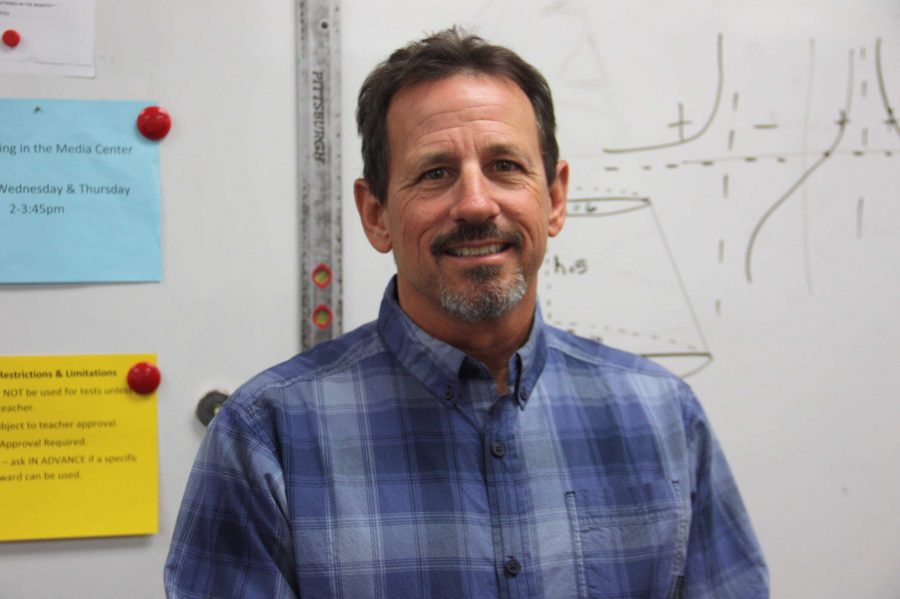 Most students simply know Rick Villano as their instructor in the math department. However, not many are aware of the route that led him to become a fixture at Foothill Technology High School as a teacher, a mentor and a constant source of enthusiasm.

The journey started in fourth grade for Villano, where a teacher by the name of Mrs. Sanders sparked a desire in him to what would eventually result in a teaching career of his own years later.

“[Sanders] had asked me to help a special ed student that we had in class and it was a big thing for me to really start helping kids, I enjoyed it a lot,” Villano explained. “I sat in the back of the classroom with him; helped him do his math, helped him do his English, and I realized I loved to teach at that point. So I think that kind of influenced me to want to become a teacher.”

After spending four years at Camarillo High School, Villano was derailed from his initial career path, although his dream job was still “to become a teacher.”

“I was convinced to go into business, and so my major in [college] was business and finance, and I didn’t begin teaching until a second career,” he said.

So how did Villano re-encounter the art of teaching that he valued? According to him, it was a series of realizations, with the first being through another one of his passions.

As an avid skier, Villano began to teach ski school at venues such as Mountain High and Mammoth. It was through being a ski instructor that his desires of teaching academics were rekindled.

The second was more than a realization, a deep, thorough evaluation of his own life. Villano realized that he would be happier in the world of teaching rather than the stressful and hectic aspects of business. In retrospect, he feels confident in his decision because he now loves his job.

“I didn’t like my job before; I made good money but I just didn’t enjoy it,” he said. “And I can say I wake up every morning just stoked to go to work. I enjoy it, I’m happy every day, so it’s kind of like something I remember that someone told me a long time ago: ‘If you find a job you love, you’ll never work a day in your life.’”

Obviously, teaching was not the only focal point in his life. As a high school student at Camarillo, Villano “didn’t really join any clubs in high school” but instead opted for activities unaffiliated with the school.

“I was a motocross guy and a ski guy, and so [they weren’t] the traditional sports,” he said.

He has taken these hobbies from high school into his current life. Villano mentioned that he was a previous owner of season passes at Mammoth Mountain, where he would ski frequently. However, no other activity has been a bigger part of his recent life than the sport of soccer.

“Soccer was a big thing,” Villano emphasized. “I played AYSO when I was younger, and then I got into coaching soccer with my daughter. ”

According to Villano, he has been involved with soccer until this year, which marks the “first year I haven’t been coaching” in a while.

“That’s kind of a whole big change for me,” he said. “I’ve spent a majority of my free time coaching and watching soccer.”

His decision to begin coaching soccer came from the opportunity to coach his daughter and current Foothill student, Hailey Villano ‘19.

“Just being able to be around my daughter, that I enjoyed a lot. With Foothill, I wanted to take a step back, I didn’t want to coach my daughter any more because I was coaching on a club team,” he said. “So, I coached the JV boys for two years and that was really fun, and then I had an opportunity to come and help out with the JV girls because my daughter was playing varsity and I didn’t want to coach her any longer. I wanted her to have other coaches.”

Although Villano admits to be unmotivated at times, his remedies seem to work nearly every time. He mentions getting “a good rest” and using his hobbies to recharge.

The quadratic formula is clearly not the only formula that Villano utilizes: a comfortable school atmosphere, a satisfying job, and rewarding extracurriculars all equate to success for the thriving mathematics teacher.