Tentative agreement: How did we get here? 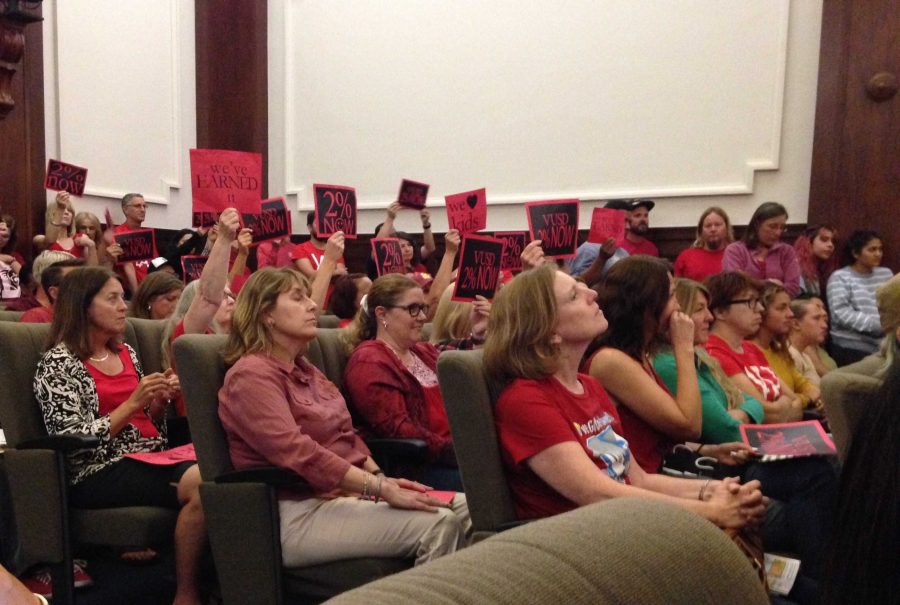 Many teachers gathered at the School Board on Oct. 10, 2017 to voice their concerns over the negotiations. Credit: Emily van Deinse / The Foothill Dragon Press

On Jan. 12, 2018, members of Ventura Unified Education Association(VUEA) and Ventura Education Support Professionals Association(VESPA) voted on the district’s new offer, advised by the state mediator, of a two-percent on-schedule salary raise. They have accepted the offer but it has been a long road to this compromise.

Educators and faculty members—including bus drivers, janitors, speech therapists and librarians—across the Ventura Unified School District have been without a salary increase for the past two years. Negotiations regarding the two percent on-schedule raise have been discussed between Ventura Unified and VUEA and VESPA since the start of the 2016-2017 school year.

Initially, the school district did not offer any raise of salary, but VESPA and VUEA refused to sway from their demand for a two-percent on-schedule upgrade. At the school board meeting held on Oct. 10, 2017, Ventura Unified remained firm on an offer of only one-percent, but VESPA and VUEA did not waver, resulting in both parties agreeing to moving into “impasse.”

Impasse includes having a state mediator come meet with both groups, meant to promote them to settle on an agreement. If the agreement does not satisfy one or both of the parties, then a stage called “fact-finding” goes into motion, in which both sides present their argument and the state makes the decision on what the offer should be. If one or both groups declines the state-mandated solution, then the option of a work stoppage, more commonly known as strike, would be on the table.

The two percent raise may satisfy the demands of VUEA and VESPA, but is still below the cost of living adjustment (COLA) in Ventura County. The COLA only covers the basic needs of housing, food, taxes and health care, but changes from city to city. In Ventura, the profession of being an educator or staff member employed by Ventura Unified does not allot the amount of money needed for the COLA.

Dan Nelson, president of VUEA, praised the resilience of VUEA and VESPA in a speech at a negotiation-based board meeting.

“We are together in all of this and we are stronger together. Don’t mistake our passion for softness. Don’t mistake our soft voices when we talk to our students for frailty. The same passion that we bring to the classroom fuels our drive for respect and a seat at the table,” he said.