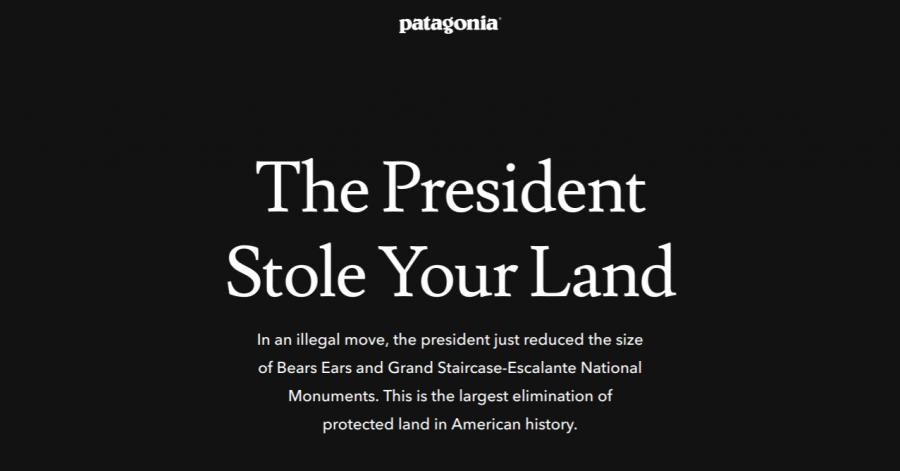 Patagonia has changed the homepage of their website to read “The President Stole Your Land” to amplify their fight against President Trump’s recent decision to reduce the size of various national monuments.

On Monday, Dec. 4, Trump made the decision to greatly reduce the Bears Ears National Monument and Grand Staircase-Escalante National Monument under the Antiquities Act of 1906. Since then, numerous organizations, tribes and companies have joined in a lawsuit to defend the public land.

Patagonia, the outdoor gear and clothing store, is one of them. The litigants argue that the move is illegal; there is controversy over whether or not the Antiquities Act allows a president to reduce public, protected land that a previous president has established.

Patagonia has been fighting to protect public lands for almost 30 years, and they helped to establish the currently under-fire national monuments of Bears Ears and Grand Staircase-Escalante, among others.

A major decrease in size of public land could have a “devastating impact” on the outdoor industry, Patagonia says. This would not only affect companies like Patagonia who specialize in outdoor activities, but would also be detrimental to those who climb, hike, hunt and paddle in these designated areas.

Additionally, Patagonia contends that this is “jeopardizing public access” to the land, because 70 percent of land that the federal government grants to individual states is bought by private interest.

The company also notes that it is a “myth” that more public land is needed for acquisition of oil. Cited by the Patagonia webpage, the Bureau of Land Management says that approximately 7,500 federal drilling sites are “undrilled and idled.”

The company has a history of standing up for matters they believe in. The establishment stands to “cause no unnecessary harm” while also using their business to “implement solutions to the environmental crisis.”

Patagonia’s information page on the matter can be found here.