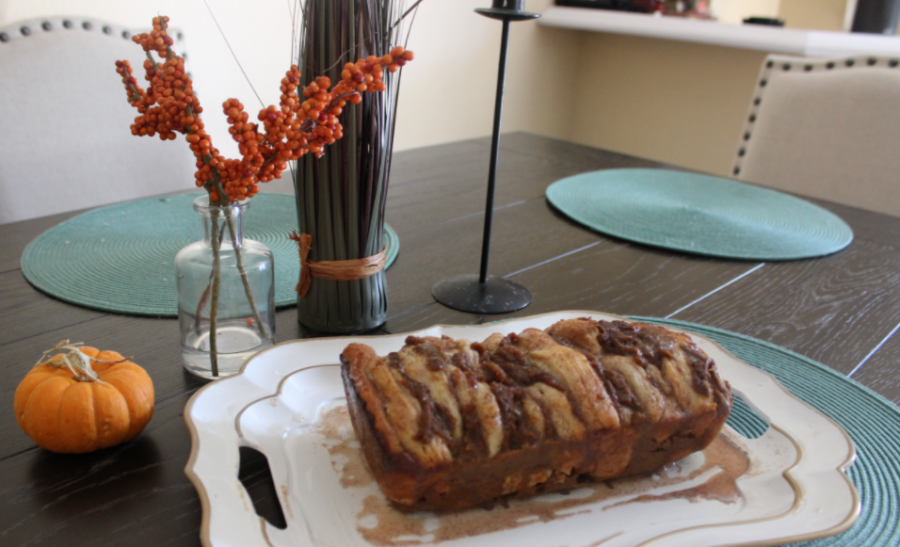 It’s still fall time and this is just the dessert you want to celebrate the time of cooler temperatures and falling leaves with. However, this dessert is an easy recipe that can be used anytime of the year; it is so good that you can’t forget about it, even when fall is over. View the video to see how we did it and read these directions to see all the steps:

Set the oven to 350 degrees.
Collect all your ingredients: one can of pumpkin puree, one small bag of granulated sugar, vanilla extract, one large egg, pumpkin pie spice, one can of non-flaky biscuits (such as Pillsbury Grand Biscuits) and a small container of cinnamon. If you want to make the glaze, also gather powdered sugar and heavy whipping cream or milk. Also collect your cooking materials: three medium sized bowls, a knife, a cutting board, a can opener, a bread pan, two mixing spoons, measuring cups, teaspoons and tablespoons.
Coat the bread pan in non-stick spray.
Mix ¾ cup of pumpkin puree with ¼ cup of granulated sugar, an egg, a teaspoon of vanilla extract and a teaspoon of pumpkin pie spice in a medium sized bowl.
Pop open the biscuit can and cut each individual biscuit in half.
Take the remaining bowl and mix ¼ cup of granulated sugar with a teaspoon of cinnamon.
Coat each half of the biscuit with the mixture of step six.
Coat two half biscuits on the front and back with the mixture made in step four and place on the front and end of the pan with the round part pointing up.
Apply the mixture of step four on one side of the rest of the half biscuits.
Place the rest of the biscuits between the two biscuits already placed. All should be placed so the round side is up.
Place in the oven and cook for 18-24 minutes. When done, the loaf should be golden brown on top and soft and gooey in the middle. If the loaf is browning too fast, you can reduce the oven temperature to 325 degrees and cover the loaf with some tin foil.
You may make a glaze that can be drizzled over the top. To make this, mix ½ cup of powdered sugar, 3 tablespoons of milk or heavy whipping cream and a teaspoon of cinnamon in the third bowl.
Drizzle the glaze over the top of the cooled loaf and enjoy this delicious treat.