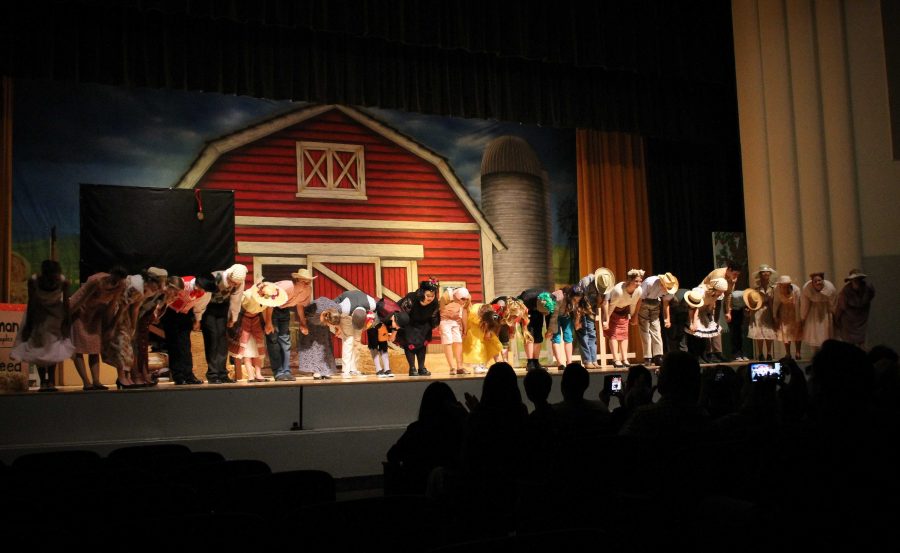 The cast takes a bow at the end of the show. Credit: Claire Renar / The Foothill Dragon Press

As the lights began to dim in Ventura High School’s auditorium, audience members left the sunny Sunday afternoon and entered into a world full of wacky geese, rambunctious rats, soothing spiders and humble pigs as the Drama department’s production of “Charlotte’s Web” began.

Staying true to the child novel, “Charlotte’s Web” tells the story of Wilbur, a young pig who starts out as a runt of the litter. Wilbur’s owner and family, the Arable’s, do not wish to keep Wilbur. However, the youngest child, Fern, fights to give Wilbur a chance, and her family reluctantly agrees.

As Wilbur grows, he becomes a larger, stronger pig. Getting to play on the farm and hang out with Fern every day is his dream, but as he becomes bigger and bigger, he can no longer stay with the Arable family. Luckily, he gets to move to a bigger, more accommodating farm, where he meets many new farm friends. The goofy Geese, wise sheep, and pesky rat all try to make Wilbur feel at home. Wilbur, however, still feels lonely without Fern. Wilbur eventually finds both a friend and a maternal figure in Charlotte, a spider who is nothing but kind and caring towards him.

As Wilbur grows even more, he becomes more and more worried. Pigs are typically turned to bacon around Wilbur’s size, but he feels he has so much more of his life to live. Charlotte, Wilbur and the other barnyard animals devise a plan: Charlotte weaves complimentary words such as “terrific” and “radiant” into her web, making Wilbur seem like an extraordinary pig. The farm workers see the artwork and are astonished; they decide that if Wilbur can win a blue ribbon at the county fair, then he can stick around for at least another year.

“Charlotte’s Web” takes the audience on a journey of Wilbur’s life. With strong acting, funny commentary, and a surprise “audience interaction,” the production is enjoyable for audiences of all ages.

Ren Tallent ‘19 played the role of Wilbur. Tallent also appeared in Ventura High School’s production of “Footloose,” as well as the Performance Theatre for Young Artist’s (PTYA) production of “Les Miserables.” Tallent is actively involved in the drama department, as well as Ventura Unified School District’s show choir. Tallent does a spectacular job of bringing the innocence and good heartedness of Wilbur to life.

When discussing how this production differs from others, Tallent stated the process was extremely fast paced. “We only had a month to prepare, so that was tough. But I think we pulled it off.” When it comes to working with the cast, Tallent claims it was full of love. “Everyone was super duper nice, and sweet, and really fun…I love them. They’re all so talented.”

Courtney Caldwell ‘18 played the role of Charlotte. Her nurturing voice and soothing words captured the maternal essence of the spider perfectly. Caldwell is also a member of Ventura Unified’s show choir, and has been featured in numerous Ventura High School productions as well. Jaidyn Sellers ‘21 played the role of Fern Arable, doing an excellent job of bringing the youthful innocence of Fern to life. Other notable characters include the three “narrators” that help bring the whole story together, played by Louis Santia ‘19, Drue Wigton ‘18, and Riley Conrad ‘18.

“Charlotte’s Web” was great fun for audiences of all ages, telling the story of a brave pig and all the loving friends he makes along the way. Through clever costuming, a well thought out set design, and impeccable acting, the play was another success for the VHS Drama department.