Who’s in charge of this political “daycare”? 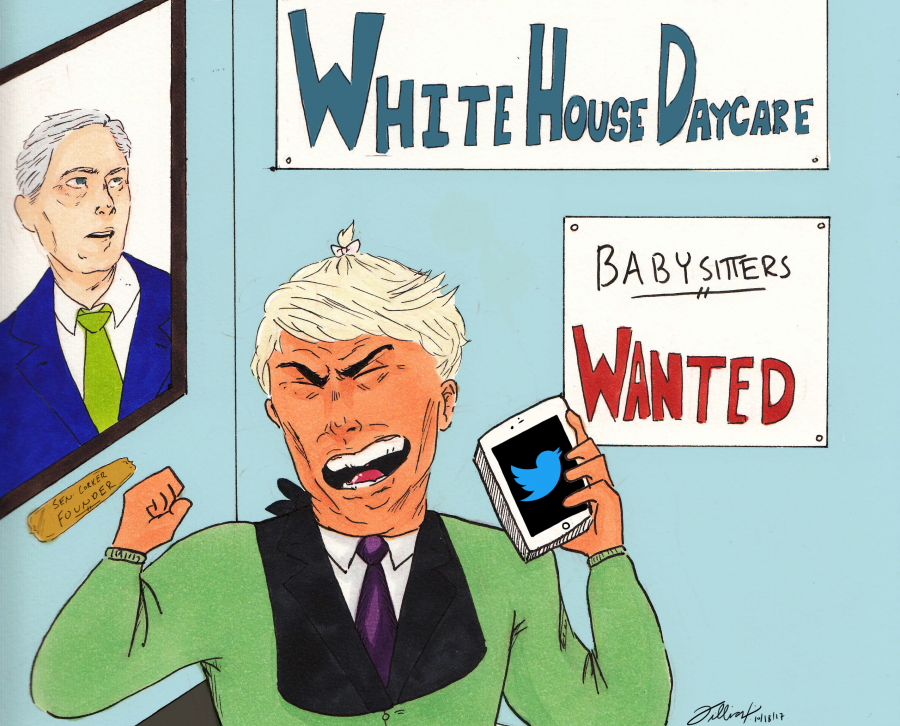 Usually, the purpose of a daycare is to hand over your drooling children, adorned with vibrant rattles and binkies, to an authoritative and trustworthy person because your free life is trampled with important work. That being said, I‘d imagine the people running this nation would either fit the role of a dependable babysitter or a busy parent, but no: as luck would have it, they’re the babies and they’re bickering again.

President Trump and Senator Bob Corker from Tennessee have taken to the overtaxed battleground of Twitter to duel in a spectacular display of eye-rolling babbling on Trump’s part. The Republican senator of Tennessee and head of the Foreign Relations Committee decided to discontinue his run for reelection, and Trump was not keen on losing a key card in his strategy for the Iran Nuclear deal. As you’d expect, the mighty bald eagle has taken to meek tweeting, chirping America into another pitfall of incessant belittling that echoes off the tired halls of the internet as we sigh in exasperation.

Trump’s tweet to Corker read that the senator “begged” for his sacred endorsement and that Trump’s rejection had struck a grief-ridden blow to his his reelection. Similarly childish to his “rescinded invitation” tweet, I’m reminded that Trump is not a desired leader either for conservatives or the United States. The president’s juvenile snaps are poisoning the Republican party, and I believe Senator Corker would agree that they have spiraled the political scene into a descent of raving madness.

It’s indubitably clear why Corker would equate the White House to a daycare, but I believe he should have considered that a daycare requires someone actually in charge of the system. With the constant shifts in positions, the press secretaries and Secretary of State Rex Tillerson constantly having to clarify the confounding conundrums that are the president’s tweets, and Tillerson himself allegedly calling Trump a “moron,” you have to wonder what brazen pandemonium is going on unchecked in Washington,

I often criticize the disjointed nature of our nation as a whole, but it seems the ails of the body lie in the disease of the heart. I want our president to be able to achieve success for this nation, but the fatigued denigrating that brought him glamour in the election days is finished. The GOP can’t seem to dishevel the reality-TV drama from the debates into this current administration, and I believe Trump’s overflowing ego is still the catalyst.

I want to believe that President Trump can take reigns of his party and of the nation without letting them slip through his anger-shaken fingers —or at the very least, give them respite from Twitter— and make the change he so bombastically promised. If this is truly a “daycare”, them Trump has to work with his political companions to nurture the children who should be us, not him. We’re the ones who need to be taken care of and strengthened as needed, and while we aren’t deadlight infants, we do need guidance from a strong and sophisticated role model.