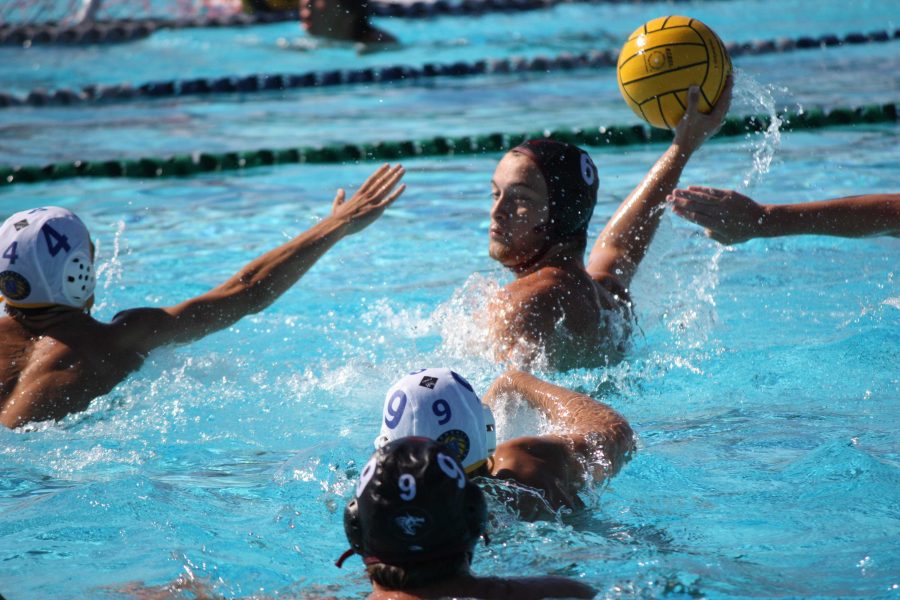 Garrett Mann '18 attempts to score in the third quarter, but Nordoff blocks it. Credit: Gabrialla Cockerell / The Foothill Dragon Press

As the Foothill boys’ varsity water polo team prepared for their game against Nordhoff High School, they aimed to erase their previous track record against the Rangers. Last season, Nordhoff beat the Dragons on two occasions. However, Friday’s game at the Ventura Aquatic Center followed a different narrative.

The Dragons flipped the script against the Rangers, improving their overall record to 12-6, while their league winning percentage jumped to .500 (three wins and three losses). Tyler Liddell ‘19 played the role of the hero in this game, recording a last-minute goal in a highly contested game in which the Dragons prevailed over the Rangers, 11-10.

Since Zion Denzel ‘19 (the Dragons’ regular sprinter) was not penciled in the lineup, head coach David Wallace had to adjust. He went with a committee at sprinter, in which Ben Clinton ‘19 had two opportunities while Nikolai Haines ‘20 and Devon Pennington ‘18 each sprinted once. Even with the adjustment, Nordhoff was not unsettled. The Rangers grabbed the first ball in every quarter, giving them a significant advantage in time of possession.

The first quarter featured a back-and-forth tempo, caused by the solid goalkeeping of Alex Abele ‘18 and the Nordhoff goalkeeper in the opposing cage. Within four minutes, Andres Coppa ‘18 broke the ice, scoring on a pass from Haines for the first goal of the game. A minute later, the Rangers knotted the score at one apiece. It didn’t take long for Coppa to regain the lead for the Dragons; he put his team up 2-1 thirty seconds later, and added another goal near the end of the quarter for good measure.

Down 3-1, the Nordhoff squad entered the second quarter with a chip on their shoulder. The Rangers wasted no time redeeming themselves, scoring twice in the first minute to pull even with Foothill. Nordhoff continued their offensive barrage, following with two goals to take a 5-3 lead. After five straight scores where the Rangers simply sliced through the Dragons’ defense with ease, Foothill woke up from their slump. Last-minute goals from Haines and Liddell tied the score at five, marking the halfway point of the game.

The Dragons struck first coming out of the halftime break, taking the lead on another score from Liddell. Over the next minute, the Nordhoff offense found another gear and got two goals past Abele, regaining a 7-6 lead. The quarter wrapped up with Liddell assisting on another goal for Haines, deadlocking the game once more.

Entering the final quarter, the Dragons flexed their stamina by scoring three quick goals, two of which were fast break scores. Haines stressed the importance of their endurance during the early fourth quarter scores, which eventually propelled the Dragons to a win.

“All the practices we’ve been doing where we just swim nonstop, that’s helped us a lot,” he explained. “And I think it really made a difference in this game.”

The three-goal cushion proved to be crucial, as the Rangers responded with three goals of their own to tie the game for the final time. With one minute left to play, the Dragons took the lead for good. Liddell delivered the final blow to Nordhoff by converting on the go-ahead goal, which eventually sealed an 11-10 win. Persistent from start to finish, Foothill found themselves in the win column once again.

As the regular season is winding down, Liddell reflected on the team’s defensive progress, which has been their “biggest emphasis.”

“We’ve really been working hard on our defense [and] it really proved how we’ve become more coordinated as a defensive team,” he said. “I think in that way, we are going to be prepared to fight to the end on the close games.”

On Wednesday, Oct. 4, Foothill has a crucial matchup at Carpinteria High School, who beat the Dragons in overtime earlier this season. Despite this, Wallace believes his team has turned the corner and is ready for the game against the Warriors, which holds significant playoff implications for both sides.

“They’re slowly gaining confidence [and] they’re just getting more comfortable playing in those tight games and not panicking and not [letting] the moment overtake them,” Wallace said.

“CIF is going to take care of itself if we just take it one game at a time,” he said.