A Constant Battle for Students: the SAT, ACT 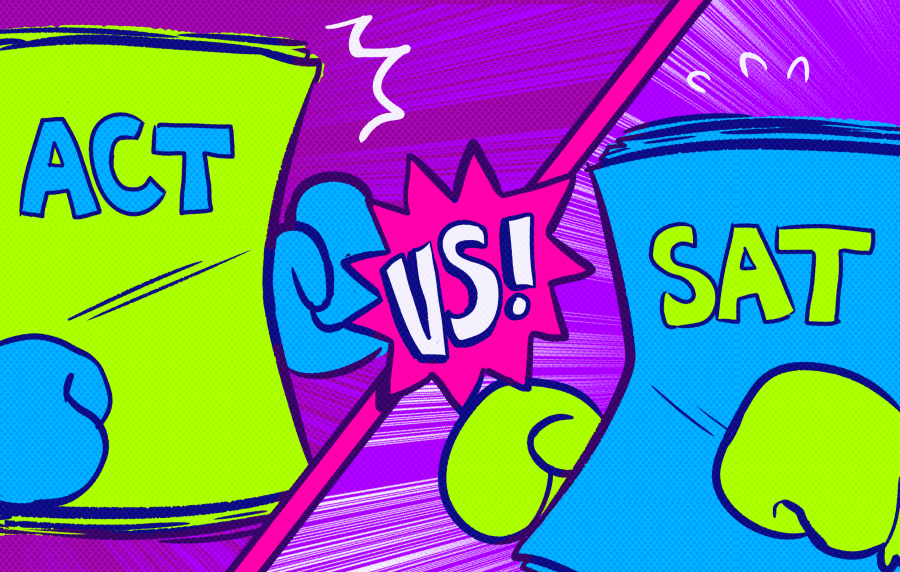 As college starts to become closer to a reality for seniors, the thought of bubble sheets, the squeak of erasers, number two pencils and complete silence might daunt you. The Scholastic Assessment Test (SAT) and the American College Testing (ACT) are two exams frequently dwelling in the mind’s of high school students.

The SAT and ACT are entrance exams used by colleges to examine and gather more information about your knowledge. The SAT was created in 1926 and is run by the College Board which is a non-profit program. The ACT was introduced in 1959 and is also a non-profit organization run by their Board of Directors.

Preparation. There are many options when it comes to preparing for the SAT and ACT. Some students decide not to study for their first time and to just see how they do. Others take a practice test at school and get a SAT or ACT test prep app. Khan Academy is a website and app that students frequently use to study for the SAT and ACT. They provide practice exercises, instructional videos and a personalized learning dashboard.

When Vineta Sondors ‘18 took the SAT, she decided not to prepare too much because like other students, “they’ll take it once just to kind of see how they do and then study and then take it again the second time,” she said.

Chad Talaugon ‘18 also said, “a lot of seniors told me at first, like for your first SAT, don’t study that much and see where you’re starting at and then you could gauge your studying on how well you do on the first one.” Talaugon also mentioned using the college board booklets was a way he prepared.

A prep book, SAT course and private tutor are additional preparations. If you need help focusing while you study here’s a concentration playlist.

SAT vs. ACT. Both exams are centered around the same idea, a student’s knowledge and understanding of core subjects, but they are very different in terminology and content.

Students see a big difference in content. The new SAT from spring of 2016 has a math section, optional essay and an evidence-based reading section which is all multiple choice. However, the ACT, also includes a science reasoning section.

It’s English section is also all multiple choice but includes usage and mechanics and rhetorical skills.

There are “three sections, English that was like you read a story or an article and then you kind of interpret it and analyze it and then there’s one that’s grammatical” Chris Kuchta ‘18 said when talking about the different sections on the SAT.

One of the main differences between them is the science portion of the ACT.

“The ACT science portion consists of seven passages with a total of 40 problems. These consist of a combination of charts, figures, graphs, and tables to sift through, as well as a ‘talking heads’ subsection,” according to Meghan Moll a professional science, math and ACT tutor. Each section has a different format on the ACT compared to the SAT.

One of the main aspects pointed out from some students was the SAT is more commonly known. Though, the ACT’s importance is certainly rising.

Why take both? Even though most colleges only require students to take one or the other, you may find it useful to take both. By taking both the SAT and ACT, more information is provided to the school’s admissions committee.

The more information you provide about yourself, the more colleges know about you. “More information is always better. If students choose one or the other, that’s fine, because both tests have value. But if they submit both, that generally gives us a little more information,” said Princeton University’s dean of admissions, Janet Rapelye.

Likewise, taking both can leave more options open, especially if you’re not sure on where you want to go. Foothill student, Acacia Danza ‘18 took both the SAT and ACT. At the time she wasn’t sure on where she wanted to apply but felt, “you never know what your college is going to want and who knows you might get a really good score,” Danza mentioned.

Jordan Kopp ‘18 also took both exams but focused more on the SAT because she felt “the ACT is kind of the backup for a lot of people that I’ve heard and for me too.”

Taking only one test isn’t going to make or break your chances of getting into your dream school. Nevertheless, by taking both exams you provide more information to your college of choice.

Difficulties for Students. Testing challenges every student, “It’s just hard when they’re so long to like sit still,” Kopp revealed.

Time was a common issue for students.

“I feel like a lot of students, especially myself, feel really pressured to do the best you can under that time restraint” Sondors said.

It’s hard to perform well under pressure, on the SAT for example, “the reading, I found it really difficult to get through it because a lot of the subjects aren’t necessarily ones you’re interested in,” Kopp said. She also mentioned that “there’s more questions than time, you don’t really have time to process.”

Danza felt that “the ACT was a longer test, in that the questions, they didn’t seem as straightforward so it took longer to kind of figure out what they were asking for.”

The content and wording of both tests can be difficult, “the SAT brings in a lot of fundamentals of math that are kind of neglected in high school math classes,” Talaugon said.

The SAT and ACT may be stressful but keep in mind there are lots of options and possibilities for preparation.