Protests need to grow out of rioting 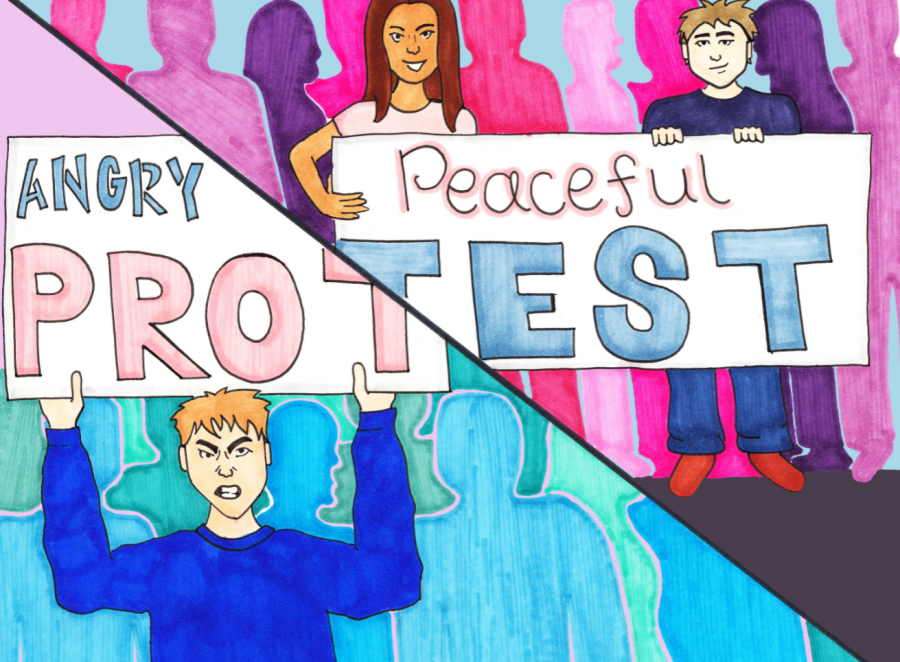 Riots. Angry protesters flood the streets with the sewage of hatred and anger, bursting apart towns and neighborhoods with outlashes of violence. The fires of discontent boil in the murky velvet of their blood and in vexed passion they gather in hordes of fury to shatter and destroy in the name of freedom and prosperity. Why have we turned so barbaric? Why is it that whenever I turn on the news and I expect to see the words “protest,” what I hear is “riot”?

I thought Americans were better than this. We have the First Amendment right to peaceably assemble and to petition, but not like this. There’s nothing peaceful about the riots, which seem to be permanent fixture in daily news reports. Recently, St. Louis was under siege from this unquenchable rage people harbor. What started as a non-violent protest over the acquittal of a police officer involved in the death of a black man in 2011 has devolved, forcing peace officers to be at odds with disruptive rioters. Riots like these aren’t helping anyone.

Charlottesville, Berkeley, Anaheim—all within 2017, and now St. Louis can be added to the protest pandemonium. We have a right to have our voices heard, to fuel the gears of democracy in our republic and create change where we see it needed. However, rioters like these are abusing that right through acts of violence, believing that the end justifies the means and that civil discourse and petition is hogwash in the grand scheme.

However, history remembers. History remembers the tumultuous civil conflicts of the 1960s: the ghastly images of smoke plumes and streams of water surrounding police and protesters, Malcolm X’s  calls of “any means necessary” but it cherishes the achievements of peaceful movements like those of Martin Luther King Jr.’s.

Point is, violence isn’t what gets us change.

We have a political system that allows our voice to be heard. If you feel yours is being drowned out in an ocean of political turmoil, yell louder. There’s no need for unnecessary damage, as your cause will be condemned rather than considered. As soon as you breach the rights of expression by harming others, you aren’t exercising anything but a cause for arrest.

The cycle of police versus people, wars through city streets and the news playing the same tired story like a broken record isn’t getting us anywhere. We like to think that at the end of these riots there’ll be some bright outcome from the blackened abyss, but the truth is that all of these riots are a stalemate. If we truly live in an age where we think the best way to build up society is to tear it down brick by brick and cast it into fire alongside cities set ablaze, then I have lost some faith in our country.

I understand there are very significant issues such as racial conflicts that frustrate us, but using violence to root it out will only make matters worse. How can you expect a more civil America in the future if you aren’t being civil in protest?

If you feel something needs to be fixed in our nation, then use the tools the Constitution offers . Abusing the sacred securities that were amended into the Constitution for the sake of the people makes you no less an injustice than the one you seek to fix. In future, I hope I won’t have to automatically translate “protest” into “riot,” and that Americans can learn to grow up and take matters into their own hands, and shape our nation with a new level of self-discipline and responsibility.