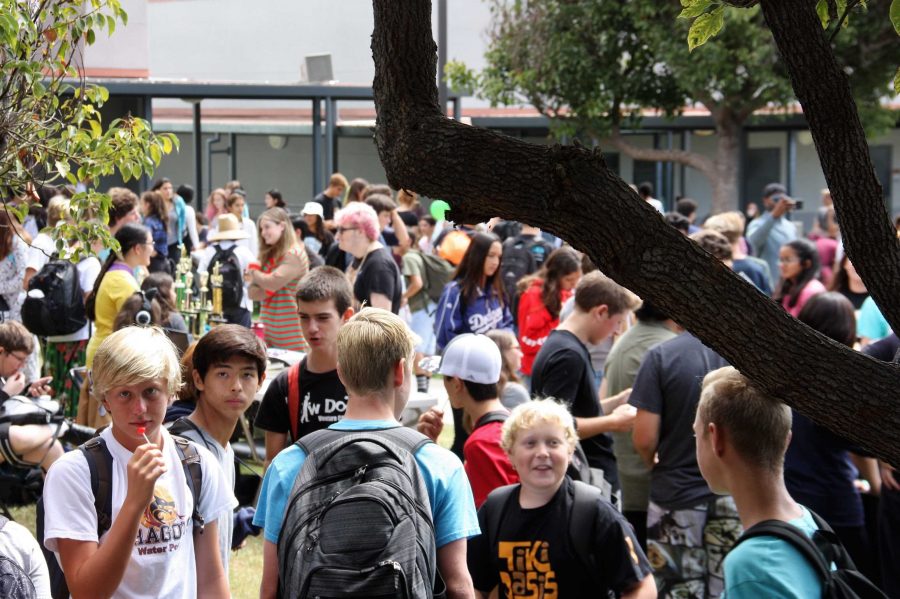 It’s important for students to have a place to call their home at a school, and at Foothill, many Dragons get introduced to theirs at the annual Club Rush. Club Rush is an Associated Student Body (ASB) run event that lets clubs and interest groups set up booths to advertise their ideas to both incoming and returning students.

The entirety of the event is coordinated by the ASB Club Director, Ruby Beckendorf ‘21. Beckendorf states that the goal of this event was to “bring everyone together and create new bonds with people that you might not have known.”

Meghan Carter ‘20 praises Beckendorf on her ability of being able to “handle it all under pressure” since this is just Beckendorf’s first year in ASB and high school.

Beckendorf also stressed the fact that if “you are new to the school and don’t really have anyone, the clubs are a great way to make friends.”

Some returning students, like Tyler Hong ‘20, say that Club Rush is important for all grade levels to help them “feel more comfortable with their surroundings [by finding their] safe space.”

Sydney Kuchta ‘19 disagrees with Hong by sharing that Club Rush is good for people who are “searching for something,” like that comfortable safe place at their school, but for people like her, who have “already found that home, it’s not as important.”

Shiloh Bayes ‘21 believes that clubs are important to Foothill.

On this day, many felt that Foothill retained a very welcoming atmosphere, especially with kids dressed as turtles, offering free hugs, or almost every station for a club offering candy to passersby. Ashley Reardon ‘21 said that because of this, she felt like she “had the opportunity to get out there and be […] involved in her school.”

After getting introduced to the Environmental Club through Club Rush last year, Ciboney Hellenbrand ‘20 has found her own home, where the people “are really accepting, […] really warming, […] and really nice.” From her own experience, Hellenbrand says that “Club Rush […] makes [people] feel more included in Foothill because you get to […] be apart of something.”

Jolie Jannone ‘20, who was manning the Spirit Team booth, thinks that Club Rush is important for “the kids who don’t know what clubs we have, [because] it’s a really good way for them to be able to connect and actually see what […] is really going on on our campus.”

Co-head of the Drama Club, Annie Castañeda ‘18, extends on the idea of being comfortable and having a home by saying that a club “really is a safe space, and it just depends on whatever thing that you are into, so someone who is into speech and debate can find their safe environment there.”

Teacher and ASB adviser, Melanie “Captain” Lindsey, who hosts her own ASB program as a family-esque environment that many kids call their home, agrees that “every kid [should] have that experience at Foothill.”

“We have the most random interest groups and clubs that [the students] want to start that it’s a beautiful melting pot of interests, that any kid can find somewhere that they can then call home,” Lindsey said.

Lindsey also stated that she’s “super grateful to the teachers for advising all these clubs […] because it does give kids another safe space, another adult to connect to, and another group of kids to connect to.”

Math teacher Wayne Powers hosted the official chess club last year, and he always encourages his students by giving them advice to take advantage of opportunities in high school.

“High school is way more of a rewarding experience if you […] find some way to be involved,” Powers said.