A roast of the Democratic Party’s losing strategy 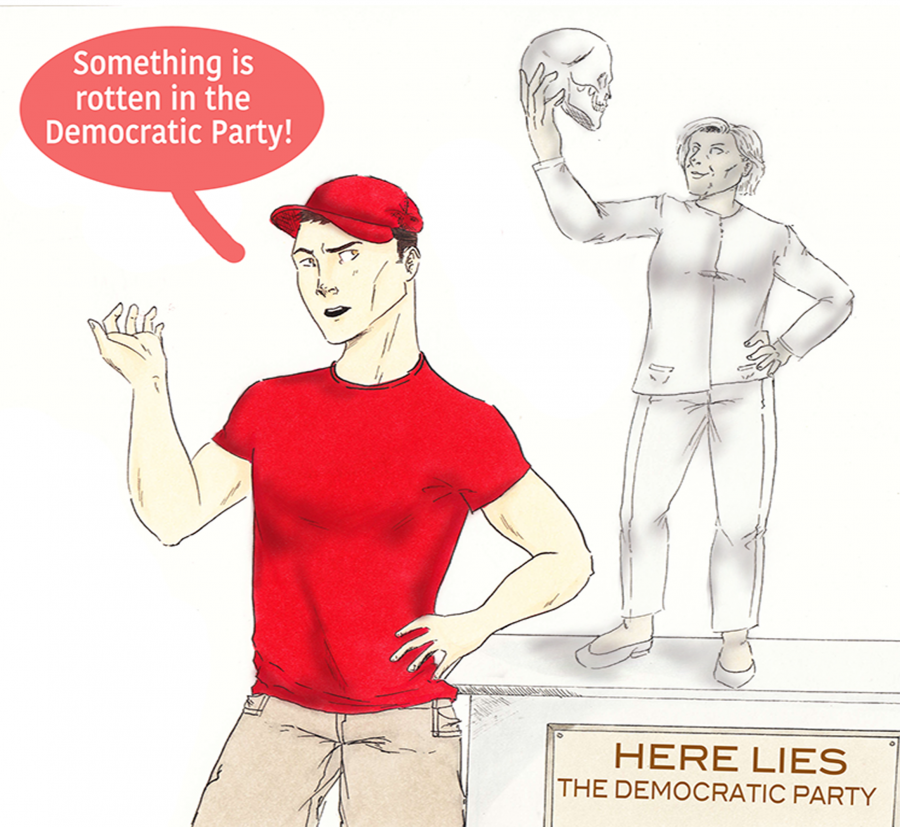 There is something rotten in the Democratic Party—a volatile stew of arrogance and identity politics served with several helpings of conspiratorial fear-mongering. At the deepest root of the Democrat’s recent struggles, however, is a disparagement of populist ideals that run counter to corporate interests.

With a failed special election in the rear-view mirror and midterm elections looming just over a year away, Democratic Party leadership is struggling to coalesce a firm, coherent message that will actually resonate with their increasingly progressive voters. Our last major election cycle revealed the importance of blue collar workers in the ever-shrinking middle class: those who occupied what were thought to be Hillary Clinton’s “ironclad” Rust Belt states.

After enduring fierce hordes of foaming-at-the-mouth social justice warriors who blamed “whitelash,” and anything-but-Hillary for her loss, the more progressive wing of the Democratic Party still managed to emerge principled amidst the chaos that followed President Donald J. Trump’s election. To this day, notable politicians such as Sen. Bernie Sanders of Vermont and Rep. Ro Khanna of California continue to appear at rallies and on national television panels to tout and discuss their populist ideals.

Whether you view them as social democratic saviors, or Mao-worshippers coming to dismantle Ayn Rand’s vision of a free-market utopia, progressives have been decisively more active and self-reflective than the moderate wing of the Democratic Party will ever hope (or want) to be.

Meanwhile, Clinton has seemingly retreated from the public eye, most likely back to Middle-Earth where she hopes to kick-start a lucrative fundraising campaign by pleading for a share of Smaug’s stolen treasure.

Therein lies the the problem with our current system of campaign finance: these aren’t your run-of-the-mill school fundraisers. These are super PACs (Political Action Committees), committees acting as the chief catalysts for the endless cycle of corruption in Washington. Inconveniently, leftist priorities such as healthcare, education, ending costly imperialist interventions and environmental protection usually go against the interests of these big money puppeteers.

Evidence from voting record and interviews support this concept, where recently, corrupted Democrats Corey Booker and Joe Manchin have blocked and ignored legislation that would seek to import cheaper prescription drugs from Canada and implement single-payer healthcare, respectively.

Under big-money influence, this type of absurd obstruction has become the status quo—especially with the advent of the Citizens United v. Federal Election Supreme Court case. How can these Democrats be expected to come out in favor of decreasing the leverage of pharmaceutical and private health insurance oligopolies that helped them get elected in the first place? Unmitigated conflicts of interest like these have the progressive base currently vexed out of its wits—and an unsupportive base tends to yield low voter turnout, in which case the Republicans usually win.

From the perspective of many voters in a state like Wisconsin, Trump was at least promising to bring the jobs back. By contrast, the alternative had a husband who signed the North American Free Trade Agreement. All Clinton could suffice was an offering of vague platitudes and cliches that conveyed zero substance, while tripping over her own shoelaces down the stretch—something to be expected, given her loose corporate ties. The efforts catering to minority groups only heightened the working class’ exasperation at being underrepresented by the Democrats.

If blocking critics on Twitter and tip-toeing around questions regarding populist policy isn’t severely indicative of stubborn adamancy as a result of corruption, then the Democratic National Committee(DNC) resorting to hysteria surely confirms the Corporate Democrat narrative. By hysteria, I refer to the ongoing futile investigation into Trump and his associates’ collusion with Russia.

This probe was a godsend through the eyes of the Democratic Party, as its strategists gathered to rejoice once it began metastasizing in the media. Corporate Democrats had finally found a way to avoid talking about substantive issues by pontificating a claim surrounded by tentatively little, if not contradictory evidence. It was nothing more than a cheap trick to score supposed brownie points from voters without having to buck corporate orthodoxy.

This topic then dominated the 24 hour news cycle uninterrupted, with Democrats willing to discuss Trump and Russia ad nauseam from every DNC agenda-driven outlet. Sadly, they still have nothing to say about making college more affordable—but they sure can whine about the current leadership situation that they helped make possible.

At the heart of this opportunistic sensationalism, what prods me the most is the sheer imprudence and hubris oozing from the Democrats. The exhausted Russia issue will never unilaterally appease the populist left. Gawking at curse words, dubbing those against the already strict Russian sanctions  as “Kremlin puppets,” and feeding into overblown hysteria that doesn’t address the struggles of the people is a losing strategy. Corporate figureheads in the media acting as smear-driven anti-Trump absolutists, even when the president makes an effort to stop arming terrorists in Syria, have adopted a mindset that lends itself to McCarthyism and the Second Red Scare.

Democrats lambasting people in their own base as sexist “Bernie Bros”—just because they have tenable, popular ideas for the country and are skeptical of corruption, won’t result in victory. Democratic incumbents will have to seek a much needed realignment of their economic and political values, or else they will be forced out by emerging grassroots movements. Even Kamala Harris, who faced criticism when she failed to prosecute Steve Mnuchin, seems to finally be recognizing the direction that she and her party must take.

Recent polling  data has revealed growing support of progressive policies, and as unrest incessantly compounds against both the current administration and the Democrats, these ideas will continue enticing voters. To those who view this as an attack on bipartisanship, I ask, why bother when you can’t even get your own team behind you? Becoming further entrenched in corruption, identity politics and conspiracy theories may get unfunny late-night show hosts on your side, but not working people. Democrats must eventually embrace populist reform (not just rhetoric), even if it takes losing the next 1,000 election cycles.