Book Review: “One of Us Is Lying” takes “The Breakfast Club” to a new level 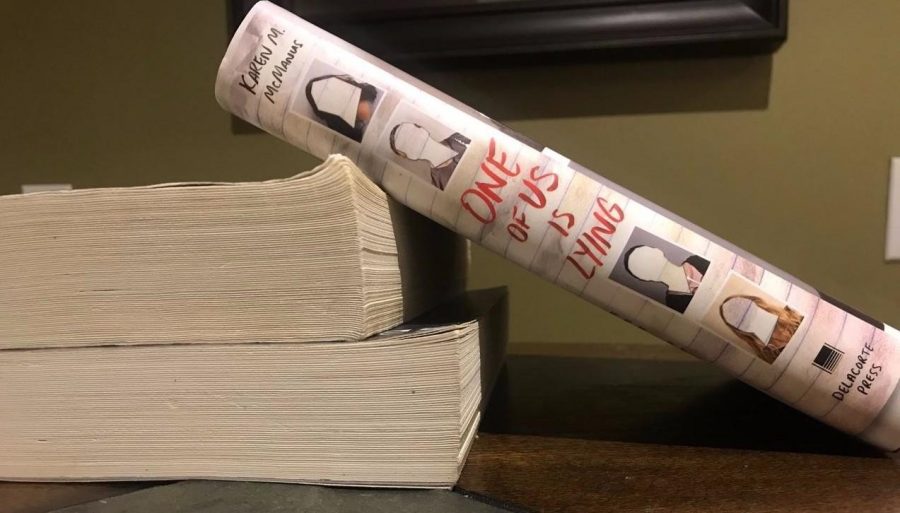 Secrets. Everyone has them, and most don’t want them to be shared. The thing about secrets is that all can be exposed. If this happens, could the victim be angry enough to seek vengeance on the one that unveiled their doings? “One of Us Is Lying” studies this idea and brings topics that need to be shared into the light.

“One of Us Is Lying,” written by Karen McManus, follows the story of Bronwyn, Addy, Nate and Cooper as they battle all the odds after an event that shifted their whole lives. All four of them walk into detention, along with a fifth person named Simon. The only problem is that Simon doesn’t walk out alive, and the other four are now murder suspects in the case.

Why? Simon was notoriously known for creating a gossip site that spreads rumors and exposes secrets about everyone on campus, and his next victims were all four of them. So the question is, who wanted badly enough to keep their secret hidden, or was there perhaps another power in play?

Although this story is completely original with its own themes and plot, it does start off with a taste of a familiar, classic story. Bronwyn, Addy, Nate and Cooper all have a stereotype that is associated with them: Bronwyn is the brain, Addy is the beauty, Nate is the criminal and Cooper is the athlete. All these stereotypes meet in detention much like what happens in “The Breakfast Club.” However, it definitely doesn’t follow the classic story and breaks away from the movie with the beautiful writing from McManus.

Amazed & grateful that ONE OF US IS LYING is still on the NYT list after 8 weeks. A million thanks to everyone who’s read & supported!!! ? pic.twitter.com/b2d7lsLzsJ

— Karen M. McManus (@writerkmc) August 16, 2017
She excellently weaves mystery with reality in this novel that keeps you hooked all the way through. The author had part of the book driven by the plot and then the characters took the wheel. As a reader, you get to see the development of all the characters and we get to see them transform into people that accept themselves for who they are. McManus focuses on each of the four and shows their development into a better person.

She subtly brings up the difficult issues of verbal abuse, depression, substance abuse and identifying with your sexual orientation. Although McManus covers all these topics, she does not make the whole book about them, but instead uses the topics to create a world which shows that you can overcome any challenges presented to you. The world that she creates is a perfect background for the plot since it utilizes a drama filled high school and all sorts of relationship drama.

At some points “One of Us Is Lying” can seem a bit melodramatic but it makes up for that by having such strongly developed characters and such a riveting plot. You will not want to put down the book before you are done with it. There are twists and turns all the way through, and in the process of reading you will change your theory of who killed Simon more times than you can count. Secrets will be revealed and lives will change in this amazing young adult mystery.