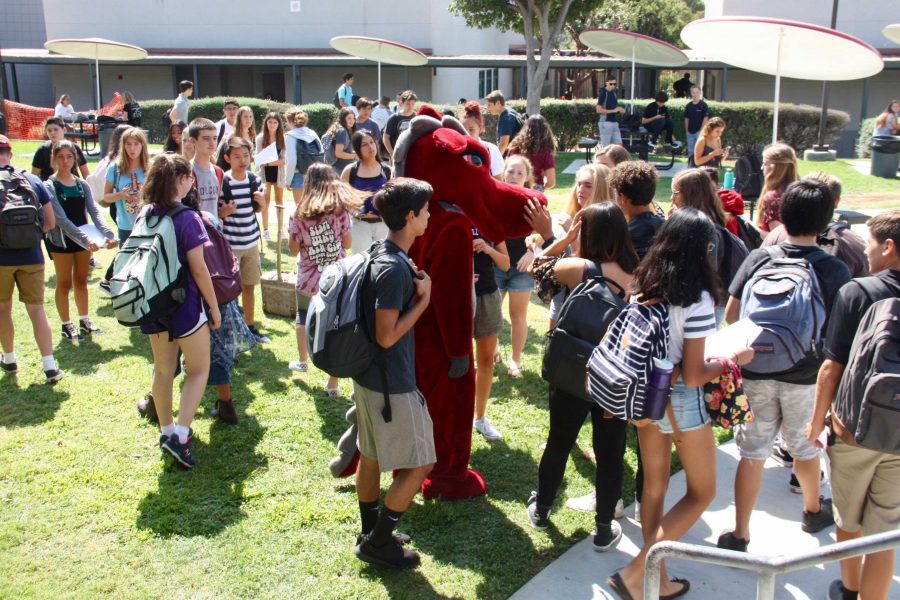 On Friday Sept. 1, every freshman on Foothill’s campus participated in the Start Strong Rally, an annual event held to allow students to get to know each other more closely and to familiarize them even more with their new campus.

First, the freshmen were led into Spirito Hall, where they began socializing and questioning what was about to happen. In total, there were about 270 freshmen packed into the hot cafeteria, all being entertained by the Associated Student Body (ASB) President, Bridget McGuire ‘18, and teacher Anthony Unchangco’s spirited endeavors.

Once all the students had finally arrived, McGuire and Unchangco challenged each Foothill Intervention, Reinforcement and Enrichment Program(FIRE) class to split into two groups and complete a scavenger hunt focusing on the different aspects of our school. The goal of this hunt was to have each class bond and get a better awareness of the campus as well as those who work there.

The Class of 2021 weren’t the only people on campus finding themselves wondering where certain people or buildings were. Tina Perez, Foothill’s new vice principal, discovered that so far, she knew very little about the school too.

“It was nice for me because I’m part of the freshmen class in a sense, so I [have] to learn a lot,” Perez said. “I am an empty vessel that needs to be filled with Foothill knowledge!”

Though many commented about how the weather was too hot for comfort, others like Jackson Vizzo ‘21 found that the “best part of the [day was] running around the school and getting to know [more] students and asking questions.”

In the beginning, the uncertainty among students was evident. Their slow pace and consistent questioning of upperclassman singled them out, but as time began to pass, energy and excitement levels rose as the music started playing and fellow students began to strike poses with teachers and faculty. The students started focusing on the light at the end of the tunnel, or perhaps the cookies in the black box.

Many freshmen like Brianna Porrazzo ‘21 commented that they had a “good time” and felt more comfortable with the people around them after the endeavor was over.

Eventually, the champions of the scavenger hunt found their way to the black box where the mascot, the Dragon, greeted them. Also awaiting them were two full tables of cookies and the traditional gown that every student who comes through Foothill signs as a commitment to graduate.

Overall, students described the event as “fun,” “enthusiastic” and full of “school spirit.” According to Vizzo, the experience he had at lunch was “a lot more welcoming than a lot of middle schools, [so it was a] very helpful,fun environment.”

Maisy White ‘21, the Start Strong Commissioner, was in charge of coordinating the event and topped the “fun” occasion off with pride.

In conclusion to a day full of school spirit, energy and enlightenment, Perez jokingly wanted to let the seniors know “that this is going to be the last event that those [seniors’] black ribbons are going to be on the spirit cup. [Freshmens’] blue is coming.”

Editor’s Note: Mayzee Oakes and Claire Renar are members of ASB but did not contribute to the preparation or execution of the Start Strong Rally.