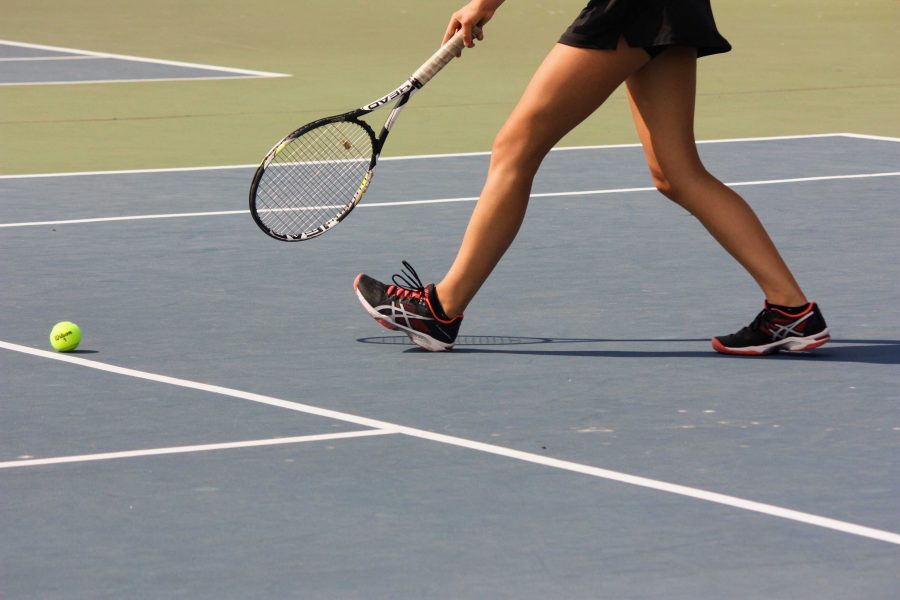 The girls’ tennis team spent their first match battling the blazing sun and their opponents, the Santa Paula Cardinals. In their first home match on Thursday, a 15-3 win meant a triumph over both.

After last year’s seniors graduated, there was a hole in the team that needed to be filled.

Luckily, according to coach Brad McClain, “the freshmen that I have replaced the talent I had with seniors.” However, “they don’t replace the experience,” McClain said. But he is confident in his players and their ability to improve with time.

With four seniors leaving, the success of the team this season will largely depend on the newcomers’ ability to step up. The outcome of Thursday’s match strengthened coach McClain’s faith in this ability, with freshmen starters Noelle Hayward, Jolie Seemayer and Olga Qoshlli ‘21 finishing impressively. Hayward had a clean sweep and tag team Seemayer and Qoshlli won two of three sets.

Though the talented freshmen thrived, the returning upperclassmen are not easily outshined.

Number one doubles team Alyssa McClain ‘20 and Sherlyn Khouvilay ‘18 didn’t give up any games before being subbed out by Cameron Wilcox and Isabella Silva ‘21. McClain and Khouvilay won their two sets 6-0, before Wilcox and Silva played the final set and finished with a loss of 3-6.

Erin Gaynor ‘19, the number one singles player, frustrated her opponents with her signature power-swing game after game. She finished with set scores 6-2, 6-0 and 6-0. During her second set, Gaynor secured a particularly one-sided game with four consecutive aces. Skilled as she is, Gaynor’s favorite part of the match had nothing to do with playing tennis itself. Instead, it was the camaraderie.

“I love the attitude of the girls,” she said. “All of them were really sweet, and we’d talk in between games. The tennis community is very small, so you get to know everyone.”

In her years on the team, senior and captain Enkela Qoshlli ‘18 has gotten to know her teammates well.

According to McClain, she runs disciplined practices that allow the team to be “good at the basics.”

Her strength and strong basis in fundamentals helped her to win two of her three sets, with scores of 6-0, 3-6 and 6-1. Though Enkela Qoshlli felt she had an “off day,” she thought the team did well, and enjoyed supporting her team. She pointed out that the near tie-breaker set that her sister, Olga Qoshlli, and Seemayer won was especially exciting.

For the first half of the set, the score read four games to one, Santa Paula at the advantage. The set was slipping away at that point, but the pair battled back to tie the score at five games to five. They won two consecutive games to secure the win at 7-5, without having to resort to a tie-breaker. However, the set lasted a whopping one hour and fifteen minutes, “taking a lot out of them,” as McClain put it.

The fatigue from the challenging set led to the unexpected outcome of a 4-6 loss in their final set, as McClain “thought they were going to sweep,” but two other underclassmen quickly made up for it.

Ella Duganne and Leah Sehati ‘20, showed again that age doesn’t matter in their performance, sweeping their sets with scores of 6-2, 6-2 and 6-0.

With such a successful start to the season, McClain is “very pleased,” recognizing that “both winning and losing can be contagious.” He hopes that this year his team can gain experience, perfect the fundamentals and continue to improve.