First dance of the school year kicks it old school 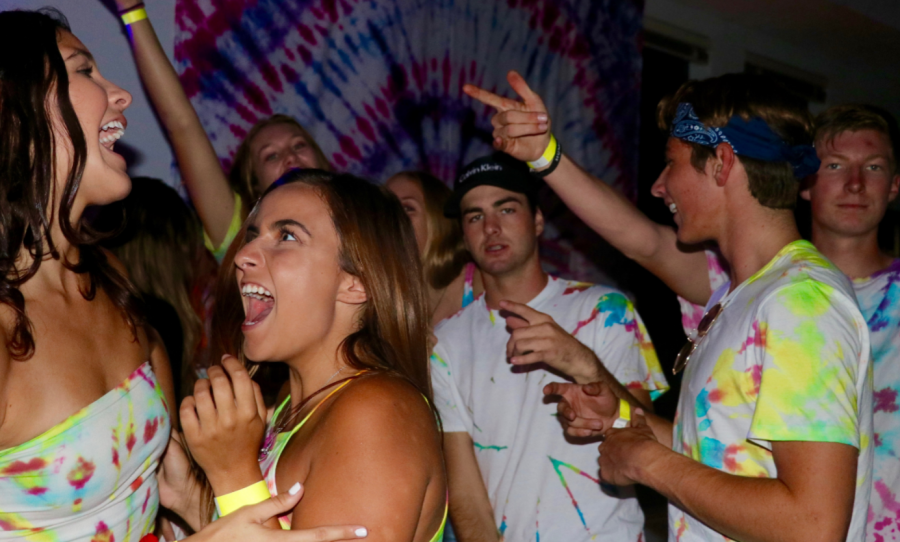 On Friday evening, tie-dyed tapestries decorated the walls of Spirito Hall and strobe lights of blue and green flashed on the students who were dancing in the center of the room. The all-district tie-dye 70’s dance, hosted by Foothill, was in full swing.

The event started with just a few small groups of mainly Dragons, but after the first 40 minutes, the dance started to become much more populated with students from other schools. Before long, Foothill’s DJs for the night, Evan Pederson ’17 and Luis Gonzales ’18, were blasting classic 70’s songs.

One factor that remained consistent was that the students were either located in the middle of Spirito Hall dancing or outside sitting at one of the tables taking a much needed break from all the energy in the building. Either way, little to no students could be seen taking the stereotypical wallflower role.

Although there also were high schoolers from Ventura, Buena and El Camino, an El Camino student named Joscelyn Stewart observed that “it was mostly Foothill kids.”

The only evident problem at the dance was the fear of mosh-pits being formed, but other than that, Principal Joe Bova stated that “everyone gets along, we are all having a good time and there is some excitement in the air because it’s the beginning of school.”

Jocelyn Parkhouse ‘20 described the dance as “chaotic and fun.”

When asked about the perpetual separation of the different high schools, teacher and Associated Student Body(ASB) advisor, Melanie “Captain” Lindsey agreed that “when it all comes down to it, they are all Ventura teenagers and they all go through the same things and have the same feelings and have the same problems, so why shouldn’t they all enjoy time together?”

Many students, such as Delaney Hong ‘20, quickly saw that “for being such a small school [the dance] had a good turnout.” At only half-way through, ASB had already sold 279 tickets and would end up finishing up the night with having sold a grand total of 309 tickets, surpassing their goal of 300.

Tressa O’ Connor ‘20, an ASB representative, said that “a lot of the ASB kids […] were here right after school setting up for it, [and] have been putting a lot of work into this”

Gunner Nagel ‘20, another ASB representative, agrees that people in ASB are not receiving as much recognition as they deserve.

“People […] think we do nothing, that they just make posters all day, and that these dances are lame,” Nagel said. “I just hope [people] all have fun.”

Overall, many students enjoyed this dance as a fun beginning to the start of the new school year.

“I think the dance was a great way to kick off the school year,” said Gretchen Scherrei ’20. “ASB did really well.”