“An inspiring and effective leader:” Creswell confirmed as new superintendent 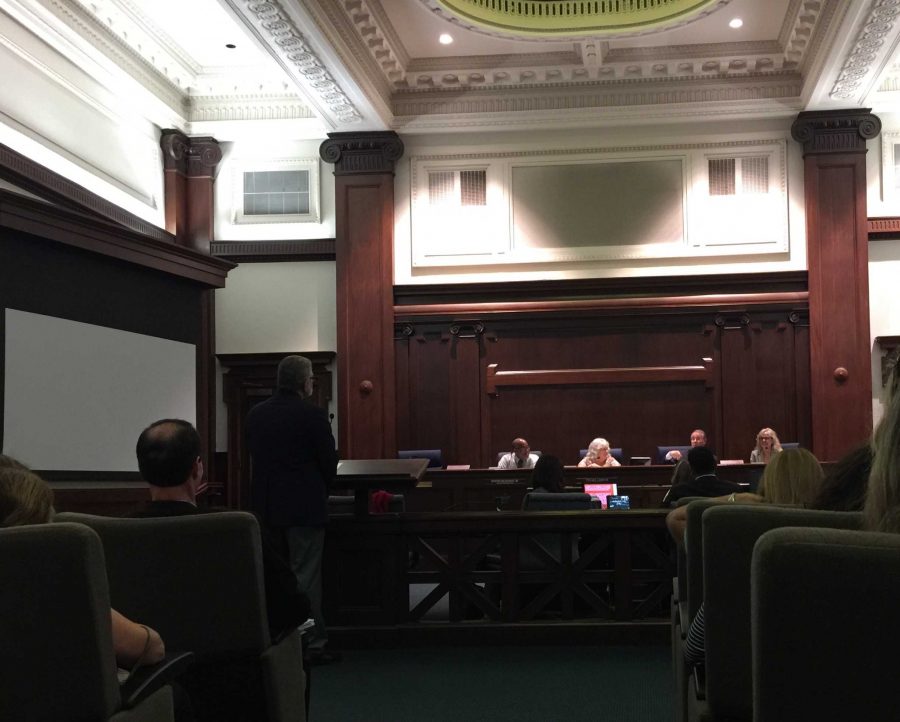 Creswell signs his contract at the School Board meeting on Tuesday night. Credit: Anna Lapteva / The Foothill Dragon Press

Following Michael Babb’s dismissal from the superintendent position in March, the Ventura County School Board officially announced David Creswell as the new superintendent of the Ventura Unified School District on July 25, 2017 after approximately four months of searching.

According to School Board member Sabrena Rodriguez, the search for the new candidate began immediately after Babb was relieved of his duties in March.

After approximately a month, the School Board decided to use California School Boards Association (CSBA) in partnership with McPherson & Jacobson as guides to help them search for candidates.

“We used a search firm that looked all throughout the state, which was important to us,” Rodriguez said. “They also opened it up to outside the state of California, but California education is really specific—our laws and our criteria are really specific—so we didn’t get any candidates that were on the ‘short list.’”

This year, the Ventura Unified and the School Board wanted to keep the process of the selection of a new superintendent as open to public input as possible. Two large community meetings were held in order to gain feedback about what was desirable in a future superintendent, and 12 stakeholder meetings with about 9-10 members were held with members from the Chamber of Commerce, the PTA and other organizations. Additionally, an online platform for public comment was created on the VUSD website.

The board initially decided upon 20 criteria that they would analyze each candidate against, such as mastery in all areas of education and their ability to hold good relationships.

Within three weeks of the application window, 51 potential candidates were found throughout California, of which 14 were selected for review by the Board. The Board chose 5 that they wanted to interview.

After extensive interviews and public and private discussion, the School Board ultimately selected Creswell as the most qualified candidate of all. A statement was released by the Ventura County School District on July 20, announcing the new superintendent-elect.

School Board member Mary Haffner believes that Creswell was the perfect person for the position.

“I believe that Mr. Creswell has all of the most important attributes that we were looking for in a superintendent,” Haffner said. “I think so much of what makes a superintendent successful is how well they communicate, and his communication style and his ability to garner trust of others is so effective, and it is going to be incredibly important.”

Haffner believes that the most important duty of a superintendent is “to be an inspiring and effective leader,” and she observes these characteristics in Creswell.

“They have to inspire others to rise, and to be the best they can be. If you have a leader who believes in others, […] then people are going to rise to the occasion. They are going to give their best work, and they are going to be inspired to do a great job,” Haffner said.

Creswell was officially deemed superintendent on July 25, 2017 with a 5-0 vote by the board during the Board of Education meeting.

“I care deeply about people, and building relationships is really important. I think that’s the way you get things done and you move forward. When it comes to priorities, people have to be at the top,” Creswell said.

Many teachers and school directors also hope that the election of a new superintendent will have a great effect on campuses in Ventura.

“Given the press release, [… Creswell] said something about wanting to ‘figure out’ Ventura first […]. In the ‘Economist’ magazine, […] they did a study on headmasters or principals who can make a big difference, and the people who made the biggest difference are the people who didn’t come in and try to completely change everything, but had a clear vision and then instituted it step-by-step. Hopefully, that’s [Creswell’s] goal,” Eulau said.

Math teacher Wayne Powers and his wife Bobbi Powers, principal of Buena High School, both await all of the improvements that will happen under Creswell.

“It really is going to provide some footing, because it felt kind of like we haven’t quite had our footing under us,” Bobbi Powers said. “When [Creswell] gets in there and comes in strong, and leads all of us, then all the schools will feel supported and feel like we’re grounded.”

“I just so enjoy education, and I enjoy all aspects,” Creswell said. “In a top position in administration, I just think I am going to have the ability to influence in a positive way so many things.”