The Foothill Dragon Press • May 15, 2017 • https://foothilldragonpress.org/258826/news/highlights-of-the-quintessentially-foothill-air-guitar/ 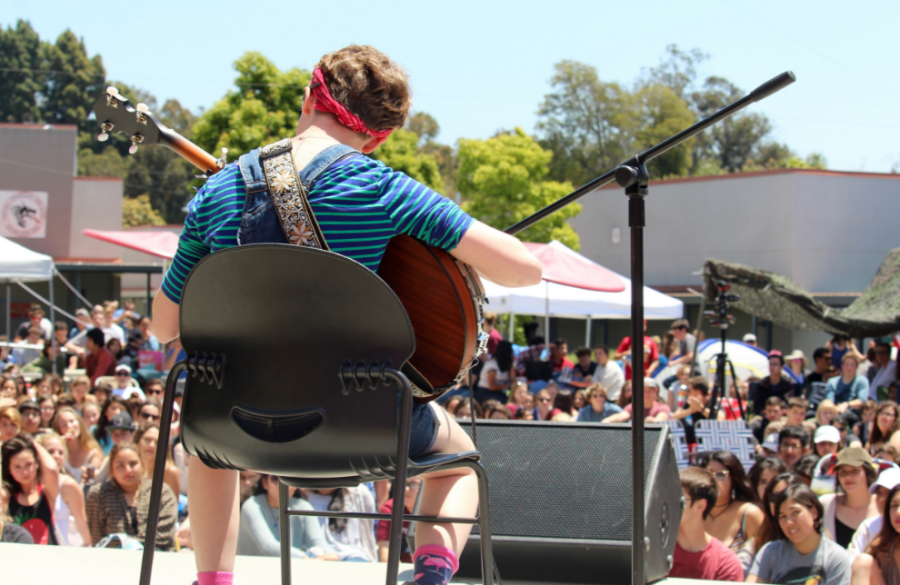 What could possibly get students to come to school at 5:30 a.m.?

There’s only one event that could, and that’s Air Guitar, Foothill’s annual outdoor talent show. By 7:30 a.m., a half hour before school started, not a blade of grass could be seen under the blankets and chairs laid out in the quad by the early birds who’d come to stake out their spots.

This year’s lineup included more than 30 students with diverse acts ranging from traditional Irish dancing and banjo to ukulele and a flash mob performance of “High School Musical.”

A panel of the judges evaluated the acts, picking seniors Ethan Ambler and Ariana Castillo’s “La La Land”-inspired dance performance as the best act of the show. Ambler has performed for Foothill several times before, but it was Castillo’s first time in Air Guitar.

“I’m really glad I could do it for my last year at Foothill. I wasn’t too nervous either, I was just really excited the whole time,” Castillo said. After watching “La La Land,” she reached out to Ambler asking if he wanted to work on choreography with her and said he was “super down.”

Brianna Corbett ‘17 was the runner-up, for her performance of “Many the Miles” and Colin Boyle ‘18 and Rodrigo Gonzalez ’18 got third place for their original song.

Emcees Kahar McCullum ‘17 and Alaina Hooks ‘18 kept up a friendly banter as they introduced acts, poking fun at each other, the different grades and even performer Destiny Malibu.

The teacher performance was a surprising mashup of “Alexander Hamilton” from the Hamilton musical, “iSpy” by Kyle and Lil Yachty and “Despacito” by Justin Bieber.

Foothill staff members Cherie Eulau, Colleen Malone, Kurt Miller, Claire Adams and Karrie Carey shared the spotlight for the Hamilton number. As soon as they came onto the stage, students jumped and ran to the front row to snag a Snapchat of their teachers dressed like founding fathers.

“It’s like a Foothill rite of passage to see their teachers do that and for the teachers to do something fun up there,” Guzik said.

They had originally planned to do another song, but had to cut it due to lack of staff participation. “It seemed like most people were just not interested or busy,” Guzik said. “But with the group that did perform, it turned out really really good.”

Food trucks invited by the Associated Student Body (ASB) kept students satisfied, although many others came prepared with coolers full of food.

The event received predominantly positive reviews from students, with the teacher performance often cited as a highlight. “It was the best Air Guitar,” Hayley Fierros ‘18 said.