The Foothill Dragon Press • May 12, 2017 • https://foothilldragonpress.org/258790/sports-3/boys-tennis-takes-home-first-ever-cif-match-victory/ 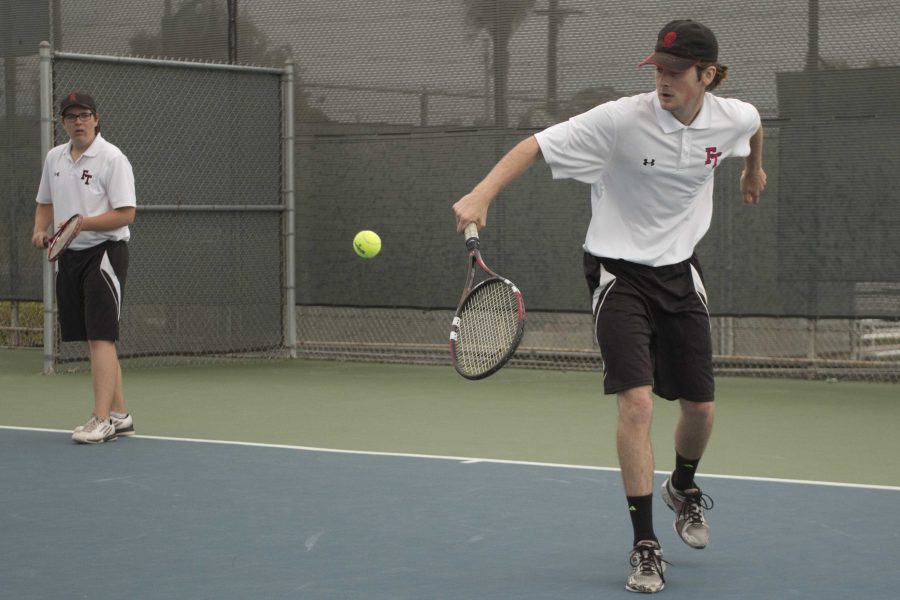 On Tuesday afternoon with clouds in the sky, the Foothill Tech boys’ tennis team played their cards just right, barely scraping by for a 65-61 victory over the Norte Vista Braves. This was the first-round California Interscholastic Federation (CIF) match for the team, but it also marked their first ever victory in CIF as a team.

While matches can typically be decided by who wins the most sets, the two teams tied at 9 apiece, so it came down to the number of games won, which the Dragons had the edge by four.

Coach Brad McClain said it was “our first taste of victory” and that “we had to do it the hard way today, because I was down a player.” Part of the number one doubles team, Noah Colby ‘17, was unable to attend the match and Ethan Wang ‘20, who usually is the number three singles player, was moved to play on the top doubles team with Dominic Dumont ‘17.

This left the Dragons without a number three singles player, and they forfeited all three of those sets 0-6.

Yuvraj Narang ‘20 put his best foot forward on Tuesday and truly helped counteract the three 0-6 losses, by winning all of his sets 6-0. Narang felt that his aggressive play helped him take care of business, but that he can work on “a little more consistency” for the next round of playoffs.

“Every game is important in tennis,” McClain said, alluding to the fact that Narang really helped the team out by not dropping a single game.

Dumont and Wang also had an impressive outing, winning their three sets 6-2, 6-0, and 6-1. McClain felt that the two “came through very strong,” giving up only three games in three sets.

“Me and my partner played amazing,” Wang said as he gave his partner a fistbump. Wang felt they played well all around and “destroyed them all.” He said that the pair could work on their serving, and that today was “by far the best competition” they have played all season.

“We clicked well as a team even though he’s not my regular partner, but I’m glad I had him,” Dumont said. He felt they were getting a little careless at some points due to being tired, but that next match they need to “power through the pain.”

The team is moving on to the next round where the date and location of the match is yet to be determined. Dumont hopes to go as “far as possible in this tournament” and Narang wants to win CIF as a team. Having won their first playoff match ever, maybe a first playoff run is due as well.