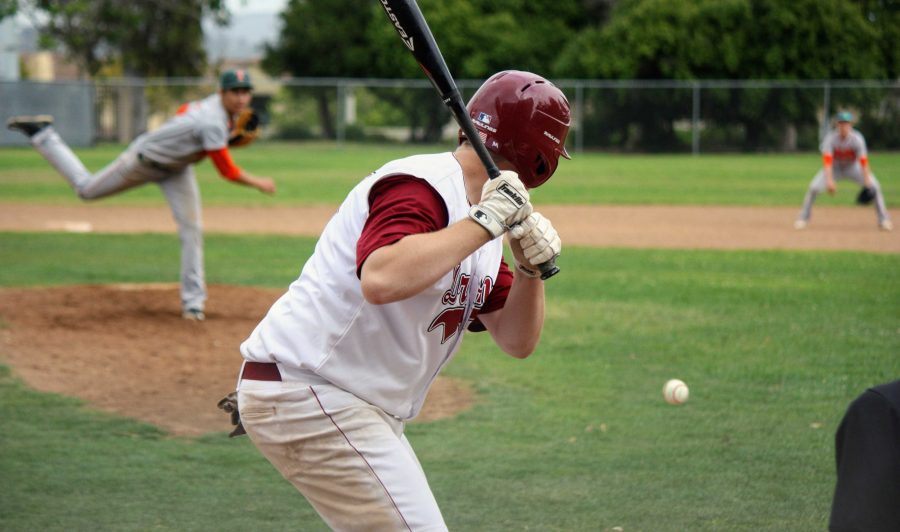 An enthusiastic crowd filled the bleachers at Huntsinger Park on Tuesday as the varsity boys’ baseball team prepared to play their final home game of the regular season. Cheers came from the Foothill fans all game long, however there were no cheers bigger than the ones for the seniors on the team. Winfield White ‘17, Zach Castro ‘17, Ryan Tamburri ‘17, Dylan Tamburri ‘17 and Dale Starr ‘17 all took the field for their last regular season home game in a Dragons uniform.

Due to it being Senior Night, the game had a celebratory feel throughout its entirety, but no celebration was greater than the one after the final out. The seniors were rewarded for all of their hard work and leadership they contributed this season with a win against their league rivals. The weather was only slightly overcast, yet it was raining hits all game long for the Dragons who prevailed over the Toads of Thacher High School with a final score of 15-4.

Ryan Tamburri put the first zero on the board when he retired the Toads in order in a rather quick top half of the first inning. His brother, Dylan Tamburri, jump-started the Foothill offense in their half of the inning with a base hit. Jacob Bridges ‘18 followed with a run-scoring triple to give the Dragons an early 1-0 lead. It didn’t take long for Starr to double the lead, as he hit a sacrifice fly to right field which scored Bridges. 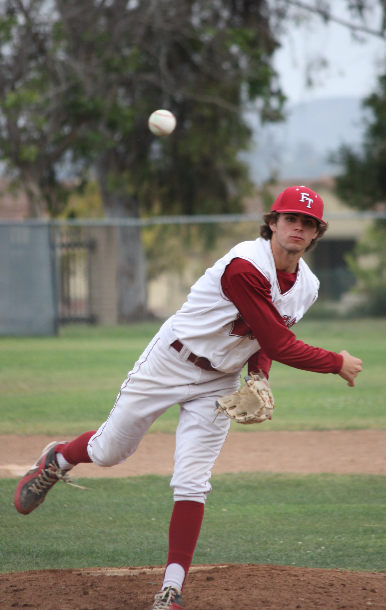 Thacher was set down again by Ryan Tamburri in the second inning, who struck out two batters while only allowing one baserunner. The Dragons looked to do more damage in the bottom half of the second inning, as Tyler Hong ‘20 drew a walk and advanced to second on a wild pitch. However, Hong was erased on a stolen base attempt when the Toads’ catcher rifled a throw to third base to record the out.

Ryan Tamburri worked around a two-out single in the third inning to record his third straight scoreless frame, maintaining the Dragons’ lead. Yet Foothill squandered another run-scoring opportunity in their half of the inning, as Troy Lindemann ‘18 was stranded on third base after reaching on an error and nabbing third base on a dropped third strike.

The Toads attempted to make Senior Night miserable for Ryan Tamburri in the fourth inning. They rattled off a string of hits, causing Ryan Tamburri to yield four runs as Thacher took their first lead of the contest. The Dragons were determined to retaliate immediately, placing runners on second and third base. However, the Toads’ starting pitcher fought through a tough at-bat from Castro, and eventually struck him out to end the threat.

Besides drawing a leadoff walk, Thacher had no success in extending their lead in the top of the fifth inning. Foothill, however, had plenty of success in their half of the inning. They went on a tear, scoring 11 runs over the course of the inning. The Dragons’ fifth inning featured a whopping 17 plate appearances. Eight of those 17 batters reached base on a hit, while four more reached via a walk. Another impressive statistic: After the first out, Foothill recorded 10 straight baserunners until finally flying out to left field for the second out of the inning. The offensive explosion left a once rowdy Toads dugout in silence, as the Dragons took a 13-4 lead.

Head coach Clint Ellison explained that the key to the fifth inning rally was “just stay[ing] true to what the guys have been working on.”

“[We were] just squaring up the ball and doing the little things, and we hit really, really well. Their pitcher had thrown a lot of pitches, and he was tired, but we just took advantage of it,” he said.

Foothill’s ace, Starr, took the mound in the sixth inning, looking to protect a comfortable lead. Despite Thacher putting two runners in scoring position, Starr worked himself out of a jam by striking out three batters en route to a scoreless frame. The Dragons padded their lead even further at the plate with back-to-back RBI doubles from Bridges and Starr, respectively, to stretch the lead to 15-4. 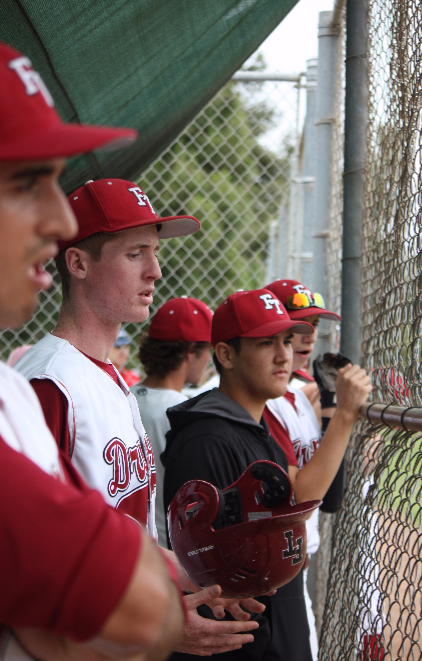 The Toads’ last chance was in the top half of the seventh inning, and they had a promising start; runners on first and third with only one out. However, Starr finished the job by recording the final two outs to end the Dragons’ regular-season home finale on a winning note. The 15 runs scored was tied for their highest run total this season, and it was more than enough to defeat Thacher, as Starr’s final strikeout sealed a 15-4 victory.

Despite the early deficit, the Dragons clawed their way out and thrived throughout the remainder of the game. According to Ellison, he “absolutely” loved the resilience and character the team displayed.

“It’s easy to get down when somebody comes up and puts four runs up against you,” he said. “But then to be able to bounce back and put up that big, big inning was huge.”

White, one of the five seniors on the team, described the afternoon to be “a pretty emotional game for a lot of us coming in here.”

“I have been here since the start of the program, so it’s a good feeling to come out here and see it all come together,” he said. “And [we] just played really well as a team tonight. Everyone’s really playing at a new level.”

Ellison mentioned how “it’s always fun” to win for the graduating team members on Senior Night because “it’s a good way to send them out” for all of their contributions.

“[The seniors] have been real good. Just day in and day out, both the practice field and in games, they kind of set the tone for us,” he said. “They just work hard, and they set the tone for the younger guys to follow.”

Bridges also felt that “it was really cool” to send seniors off with a win.

“I felt happy for them. I’ve been playing with these guys for three years,” he said.

With the win, the Dragons clinched at least a share of the Frontier League title. Their league record now stands at 8-1, while the Cardinals of Bishop Diego stand at 7-2 on the season. There are two scenarios in which the Dragons can clinch sole possession of the League title: one being a Foothill win at Thacher High School in a rematch against the Toads, or the other being a Cardinals loss against the Saints of Santa Clara High School. If both of these scenarios fail to occur, the Dragons and the Cardinals will be Co-Champions of the Frontier League. The Dragons’ season finale, as well as Bishop Diego’s final game, will be played on Thursday.