Track and Field competes at home for final league meet 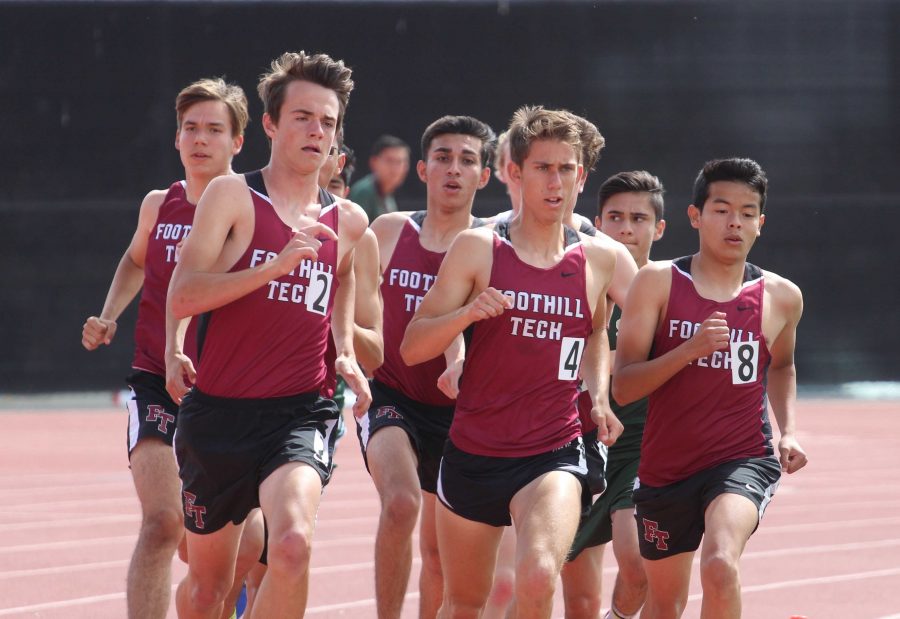 The Foothill Track and Field teams’ largest opponent seemed to be the wind at the Wednesday afternoon dual meet against Saint Bonaventure High School and La Reina High School. Despite the weather conditions, students competed, set new school records, qualified as a team for league championships and even shed a few tears.

Distance runners swept the board for both the boys’ and girls’ 1600m race by filling in the first three spots. Kennedy Gomez ‘19 and Chris Kuchta ‘18 each took first place in their heats.

The Dragons also filled in the first three places in the 800m races with Hana Vrablik ‘19 in first, followed by Gretchen Scherrei ‘20 in second and Blythe Blakeman ‘19 in third. For the boys, Jonah Bufford ‘17 took first, followed by Dan Thow ‘17 in second and Chris Kuchta ‘18 in third. In the boys’ 200m dash, both Ezequiel Colby ‘18 who took first place and Riley Bangs ‘18 who followed in a close second, earned a personal record. Alexandra Avila ‘18 took first place in shot put.

Daniel Holst ‘17 said that he performed “the best I’ve done in a while,” as he took first place in high jump and second place in both triple jump and the 110m hurdles. Holst also set a personal record in triple jump at 41 feet 2 inches and high jump at 6 feet 2 inches. He proudly noted that he saw “a lot of [his teammates] stepping up and doing well in their job.”

To mentally prepare himself before his events, Holst “visualized” his goal and “went through it over” in his head to “make sure I did what I needed to do.”

Although Holst is unsure of which event he will be competing in, he hopes to qualify for California Interscholastic Federation (CIF) Preliminaries at the Tri-Valley League Championships on May 4 at Carpinteria High School by getting qualifying times and placing at least third.

Although Cameron Becker ‘19 doesn’t believe she ran to the best of her ability in her events, she does believe that she “scored well” for her team, taking third place in both the 200m and 400m races. Becker got a personal record in the 200m, clocking in at 27.32 seconds. She also raced the first leg of the first place 4 x 400 relay team.

To Becker, warming up for races is mostly about mental preparation, because “you just have to push yourself, even when you’re tired.” She joked, “physically, I just ran around a few times to warm up.”

Becker enjoys the familiarity that comes along with racing on her home track and simultaneously feels a rise in competitiveness.

“You kind of want to defend your own home,” Becker said.

Leandro felt the “home court advantage” to its fullest extent. She said “knowing that I can clear [the bar] because I’ve cleared it on this exact runway” during practice took a lot of stress off her shoulders.

Track coach Mike Russell was very proud of Leandro’s performance and thought it was“pretty cool” of her to set the school record shortly after beginning pole vault.

Track and field head coach Jason Dinkler thought the Wednesday meet was “one of the better overall team performances” the team has had because of the team’s consistency in different events across the board.

Dinkler looks forward to County Championships at Moorpark High School as “an opportunity for kids who have done well all year to shine in the county events.”

Official scoring for the meet can be found here.