Troy Lindemann ’18: Competing on the field and supporting his school 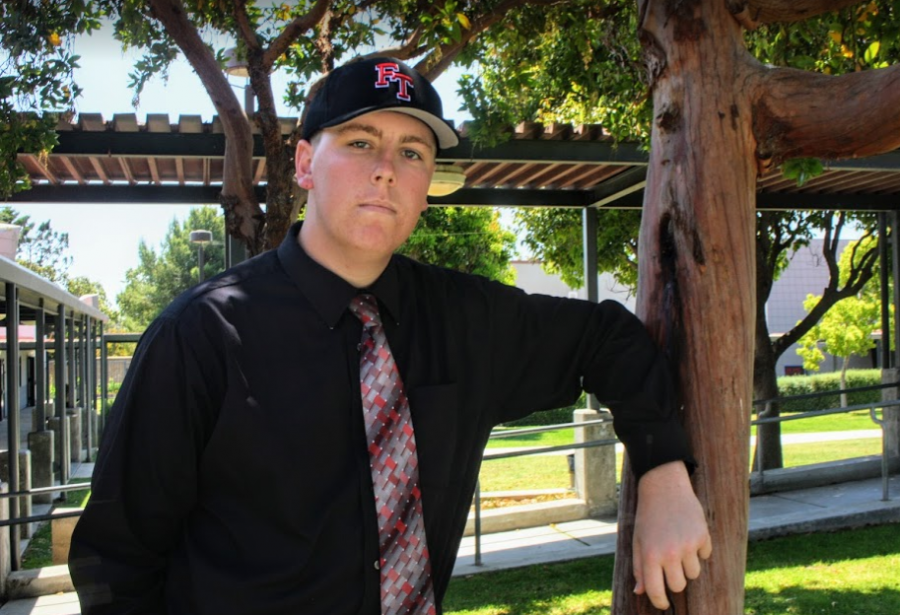 For Troy Lindemann ‘18, the sport of baseball has always been a major part of his life. He set out on his baseball journey when he was in kindergarten and he credits his dad for being one of the main reasons he initially decided to play the sport.

“My dad was a huge baseball fan himself,” Lindemann said. “He has really inspired me and he got me interested in it.”

Lindemann spent a total of nine years playing lower-level baseball, including tee-ball, Minor Leagues, and the Major Division (also known as Little League). According to him, his favorite baseball memory occurred in Little League.

“When I was in Little League, my team won the championship game,” he explained. “The environment felt really cool, it was a winner take all game. It kind of felt like a [World Series] Game 7.”

Through his time as a member of the Dragons’ varsity boys’ baseball team, he acknowledges that high school baseball is a whole new ballgame when compared to Little League.

“It’s a lot better, a lot more competition. It’s still fun though, that’s why I really like it,” he said. “The game has changed a little bit throughout the time I have been playing, but it’s still the same game.”

According to Lindemann, the game of baseball has captivated him because he enjoys “having fun, being with friends, and competing hard.” He is especially fond of being on the Dragons’ squad for many of the same reasons.

“I feel that the team is a family […] and we all like each other,” Lindemann said. “We just really get along well.”

On the field, Lindemann is a valuable contributor due to his versatility. As well as being the starting first baseman, he is also featured as a pitcher, whether it be in a starting role or a relief appearance.

His role as a first baseman calls for a solid defensive presence and a power threat. Lindemann does just that, providing ample force in the bottom half of the Dragons’ lineup. The offense has thrived when Lindemann gets on base, as contact hitters such as Dillon Gallagher ‘19, Dylan Tamburri ‘17 and Ryan Tamburri ‘17 have been able to score him more often than not. Lindemann’s hitting efforts are centered around focusing on “getting my timing down and staying back on the ball,” and he realizes the importance of having a strategy at the plate.

“You really need to have an approach when you’re up there,” he said. “You can’t just go up swinging.”

As a starting pitcher, Lindemann provides depth behind the Dragons’ ace Dale Starr ‘17, as well as Ryan Tamburri. In the relief role, he is mainly used if the starting pitcher can’t go the distance, similar to the position of a closer.

Before every pitching performance, Lindemann reviews his mindset: “Throw strikes, keep the ball low.” He recognizes that his elevation of the ball can lead to trouble, so he follows this mantra.

Despite being an avid Major League Baseball fan, Lindemann focuses less on the playing style of the game’s top stars and takes a unique approach.

“I just try to play my own game,” he said. “Everybody’s different and I just [try to] be myself out there.”

Another unique quality that Lindemann possesses is intense passion- not just in baseball, but also for his school. If you have ever attended a Foothill basketball game, for example, it isn’t difficult to distinguish his enthusiastic chants and rallies from the rest of the raucous crowd. Lindemann advocates for school spirit and support frequently on campus, partly because it is a great source of fun for him.

“I support my school,” Lindemann said. “It’s all [about] having fun out there, you know.”

Teammate Trey Casswell ‘18 described how Lindemann is known to lighten the mood in otherwise pressure-filled situations.

“Troy is very energetic most of the time and loves to joke around,” Casswell said.

Another aspect that stands out to his teammates is his willingness to improve. Karl Roth ‘18 mentioned that Lindemann is “one of the most hard-working players” he has ever known.

“He is always working to get better at practice,” Roth said. “And although he makes some mistakes, he tries to correct them and get better.”

Concerning the future, Lindemann knows exactly what must be done in order to grow as a baseball player.

“Hard work and never stop improving,” he said. “Even the best players in the game today are still working to get better, and that’s what we have to do.”

Yet although he has room to improve, it is apparent that he holds the trust of his teammates, including Casswell.

“I wouldn’t want anyone else in the whole school to play first base,” Casswell said. “He definitely knows it better than anyone else.”