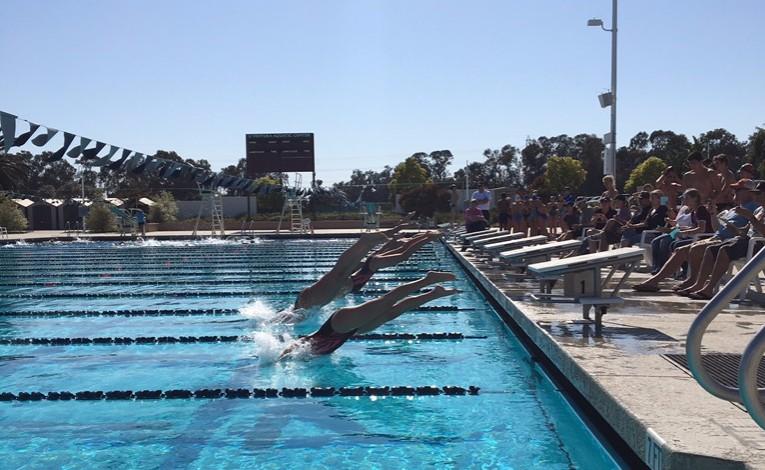 Foothills’ swim team faced off against Santa Paula High School in their third home meet of the season. For the second time this season, the Dragons decided to compete in their off events. Despite the challenge, the Dragons were able to safely win the meet, sweeping all divisions with a girls’ varsity score of 216-34 and a boys’ varsity score of 108-34.

Jake Anders ‘20 felt that his races went well. Although his goggles slid off his eyes during his 100 meter race, causing him to lose sight of his 52 second goal, he was “alright” with his 56 second time and will continue to prepare so that he can swim faster next time.

“I’ll get ready by just doing more workouts and just purely swimming, I mean swimming comes in time,” Anders said. “Luckily I started with lots of talent and that has helped me boost forward but the rest of it comes from doing it a lot and doing it frequently.”

Anders’ sister and teammate, Maizie Anders ‘18, felt that she swam quickly during the Friday afternoon meet. She believes that her improvements throughout the season were portrayed through her 100 meter fly event. After racing 1 minute and 22 seconds in the 100 meter fly at the beginning of the season, she was able to decrease her time by roughly 12 seconds when she earned a time of 1 minute and 10.25 seconds on Friday.

Although she earned a personal record, there is always room for improvement. Maizie Anders feels that her back was to arched and that her shoulders came to far out of the water with each stroke. In order to improve these errors in time for league finals, she feels that she needs to practice staying lower in the water and needs to recover from her rigorous practices.

Despite the hard work that Maizie Anders puts into swimming, ultimately her goal is to continue “having fun and not stressing [herself] out and just kind of doing little improvements as they come.”

Head Coach Jason York felt that since Santa Paula is “not the strongest competition” that the Dragons have to face, Friday’s meet was “an ideal opportunity for [the team] to swim against a team that wasn’t that strong and swim events that [the team] is not that strong in.”

Since the swimmers swam events that were not customary for them, “some swimmers didn’t like that and they didn’t like me for it,” York said.

However, York believes that the athletes were prepared to swim these races and that they should “be proud” of their accomplishments.

“We really cover everything at work out,” York said. “We work really hard conditioning wise. We spend time on the technical aspects, the dives, the turns, the stroke techniques. They’ve been working really hard.”

With Tri-Valley League Championships just a few weeks away, York feels that it’s “time to step up the game.” He believes that “the preparation for finals actually started at the beginning of the season” when the team was “laying the groundwork and working hard and getting in better condition.”

The team will prepare specifically by tapering down the amount of yardage covered at each practice, decreasing the time that is spent in the water and focusing on the details of each of their strokes.

Correction: A previous version of the article falsely stated that it was the last home meet and that Maizie Anders swam a time of of 110.25. The article was corrected at 9:41 a.m.