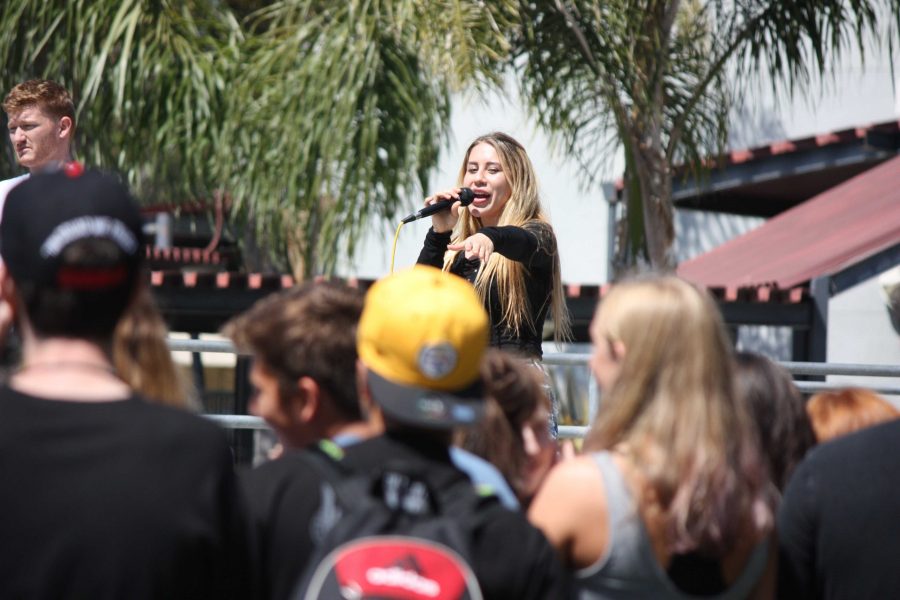 If you happened by Foothill yesterday after lunch, you’d likely have run into more than one student with “Destiny Malibu” scrawled across their forehead. Or perhaps you’d find a frisbee, Hydroflask or binder bearing the same name.

That name belongs to the singer and songwriter who came to Foothill yesterday to perform during the first half of lunch. After fourth period, students gravitated towards the quad to listen to her lineup of classic and original pop songs, dancing along and cheering. At first the crowd was small, but people trickled in as the show progressed to fill the whole front of the quad.

Malibu started out with a rendition of “Closer” by The Chainsmokers, dancing around the stage and tossing Frisbees into the crowd. She then did a personalized rendition of “Happy Birthday” for seven Foothill students, inviting them up on the stage and giving them customized PopSockets.

Following was a performance her original song “Time,” and then Ed Sheeran’s “Shape of You.” She finished with a single off her new EP, “Kissed by an Angel.”

After chants of “one more song,” Malibu topped off her performance with a classic acoustic number – “Here Comes The Sun” by The Beatles.

The singer was accompanied by guitarist Luke Campbell. “Luke has actually been one of my best friends since we were like 13,” she said. “It’s really cool to be out there and really chasing our dreams.”

This is Malibu’s first tour with High School Nation (HSN), which is “a traveling Music & Arts Festival that visits public high schools all across the country, introducing students to opportunities in the arts,” according to their website.

“High school kids are such a great audience because they’re really excited,” she said. She encourages youth involved in the arts to pursue their passions despite competition. “There are a lot of talented people out there, beyond, but don’t ever feel like there’s not room for you. There’s room for everyone,” she said.

HSN contacted Associated Student Body(ASB) adviser Melanie “Captain” Lindsey at the end of March asking if Foothill wanted to do “the complete High School Nation Experience,” an event similar to the Renaissance Rally two years ago.

A nearby school was scheduled to have the event but had cancelled, so the organization said that if 2,000 students attended it at Foothill, they would give Foothill the money to build a recording studio. Lindsey reached out to Buena asking if they wanted to partner up, but “Buena was not on board,” so Foothill could not meet the 2,000-person goal.

The organization instead offered a short concert from Malibu, and Lindsey jumped at the offer. “I said ‘heck yeah’,” Lindsey exclaimed. “One of the things that was on the survey we sent out a year or two ago to the students was they wanted more live music at lunch, so that’s what we’ve really worked on.”

Despite some logistical difficulty, Lindsey hopes that students enjoyed the show. “If the reason for them coming to school today was because that was going to happen, and that put a smile on their face, then it was worth every email I had to send,” she said.

Indeed, students cheered and sang along to the songs they knew, and crammed to the front of the stage to take pictures with Malibu for more than a half hour after her concert.

“You guys are an awesome school, I’m happy we stopped here,” Malibu said.