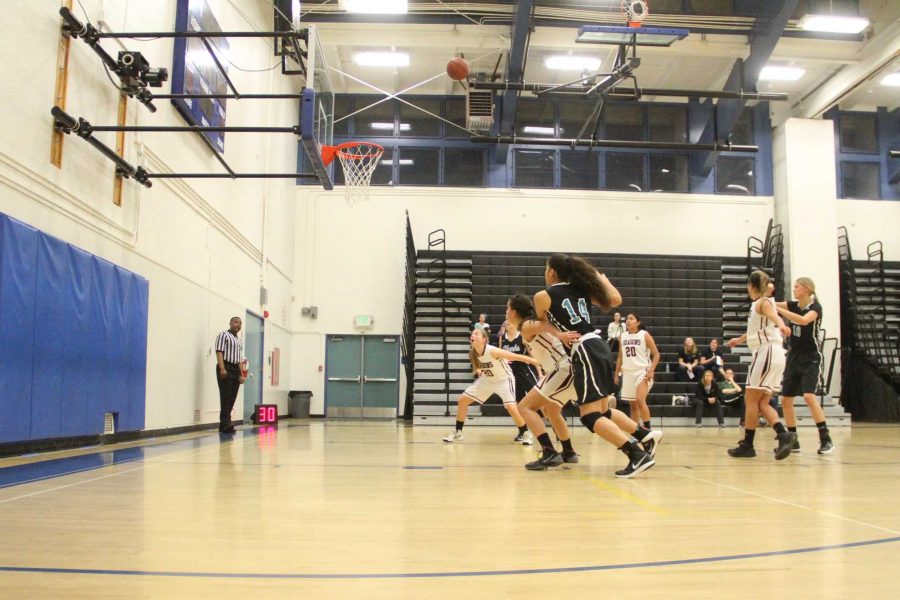 Cabrillo Middle School’s gym was filled with the sound of squeaking sneakers and cheering spectators as the Foothill girls’ basketball team played their final home game against Malibu High School on Tuesday. In a tense game, the Dragons lost to the Sharks with an end score of 21-29.

The night began with a senior recognition ceremony, honoring seniors Cami Bern and Madi Stevenson with bouquets of flowers and a speech about each player.

Malibu made the first point in the first quarter but Foothill quickly retaliated when freshman Ze’lee Sparks scored a two-pointer a few minutes later. Three more free throws made by Malibu were reciprocated yet again by junior Sienna Romero with a two-point basket. The first quarter ended with a score of 4-5, in Malibu’s favor, when the Sharks managed to score another free throw.

In the first ten seconds of the second quarter, Malibu scored a two-point basket. However, Romero answered with a three-point basket with 6:16 left on the clock. Romero also put two free throw points on the board, but Malibu outscored Foothill for the quarter, and ended the half with a score of 8-17.

Malibu started off the third quarter with a 2-pointer but Romero made two free throws soon after. The quarter closed with an additional free throw made by Sparks, totaling the score to 11-19 points with Malibu in the lead.

Junior Rebecca Negrete scored the first two points of the fourth quarter. Throughout the quarter, the Sharks and the Dragons battled for dominance, with Malibu answering each basket Foothill scored. However, in the final 11 seconds of the game, Malibu scored four free throw points, sealing the score at 21-29, Malibu’s favor.

Senior and captain Madi Stevenson noticed a definite difference in the “energy” of her teammates when compared to other games.

“[W]e could have played better for sure,” Stevenson said. “One thing I like about our team is that we don’t give up, we’ll play until the very end no matter if we’re down by ten, 20, 30 [points] but I just think the energy wasn’t really there tonight.”

Freshman Ze’lee Sparks agreed that the team needed to play with more determination.

“I feel like we could have played a little bit more aggressively, and definitely put more of our heart into it, but other than that I think it was a great game,” Sparks said.

Athletics director Emily Stevens also echoed the the teams’ persistence even with the tough loss.

“Well, I was hoping for a better outcome but I’m still proud of the girls and all the effort they put in,” Stevens said. “They never gave up, they continued to play really hard defense.”

The loss aside, senior Cami Bern believed that her team had an exceptional season.

“I think we’ve really grown, because we weren’t expected to even win a game this season, and we’re in the top of our league, so it just shows our improvement over the season, and how we’ve learned to work well together,” Bern said.

Coach Jason Edgmond believes the season has been a challenge in playing with limited practices, but still feels it has gone well.

Both Stevenson and junior Rebecca Negrete noted that the team had grown much closer over the course of the season.

“The chemistry [among the team] has grown a lot. We know our tendencies more, we know what we do good [sic] and what we need to work on,” Negrete said.

For Stevenson, choosing to play for Foothill in her senior year was a decision well made.

“I have lasting friendships now, I’m really going to miss these girls a lot. I’ll come back and support them next season when they play if I decide to go to college close, but even when I come home and visit my family I’ll go to their games,” she said. “It was a really hard decision for me to switch from Ventura to Foothill but I’m really glad I did. I love this team.”