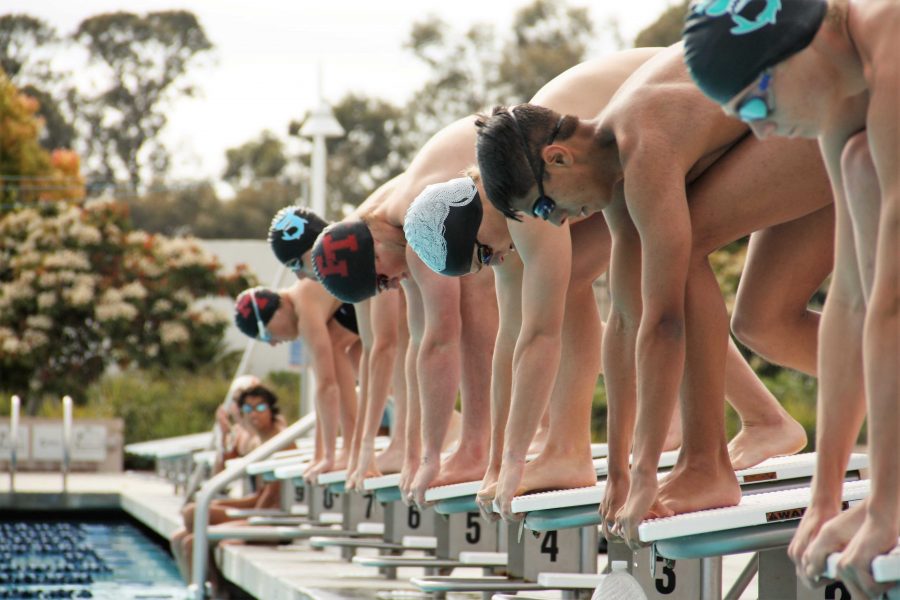 Friday marked the end of a long and physically “draining” week for the Foothill swim team, having competed in a three day swim meet called the “Ventura County Championships” in the days leading up to their meet against Malibu High School. Foothill and Malibu matched each other heat for heat, but Foothill couldn’t quite seize the final victory, falling with a final score of 169-161.

Head coach Jason York knew of the team’s fatigue, and compensated by putting some swimmers in “off events, meaning  events that are not their favorite events, just for the experience.”

Lezly Plahn ‘17 was one of the swimmers put in an “off event,” swimming the 200 meter freestyle, as opposed to her usual 100 meter. Plahn sees it as advantageous to “switch it all up” because then swimmers are “not just constantly doing the same thing, and we’re getting a feel for the water in a different way.”

It seemed to work out for her, seeing as she was second in her heat of the 200 meter freestyle with a time of 2:07.21, an achievement she’s proud of.

Sydney Roman ‘19 also swam an event out of her comfort zone, the 500 meter freestyle, which consists of 25 laps and takes upwards of six minutes. She ended up getting second in her heat, too, with a time of 6:07.2.

Even with these ‘”off events” in the mix, the Foothill girls dominated the meet, scoring a total of 107 points, as opposed to Malibu’s girls, who scored 55 points.

This was no surprise, seeing as York called the girls side of the varsity team “very strong.”

For the boys, on the other hand, it was almost the exact opposite. Foothill finished with 54 points, compared to Malibu’s 114.

First year varsity swimmer Jake Anders ‘20 is proud of what he and his team accomplished, but still recognizes the room for improvement.

“We all have little things to work on,” he said, “and I believe if we can shave off those little mistakes, then I believe we can make it to CIF.”

Clearly, with eyes turned ahead to “bigger meets” like league championships, the mindset of the meet for Foothill was not “we must win,” but, rather, “we must improve,” which, according to York, was a success.

“We’ve definitely seen improvement over time, but we’ve had a lot of swim meets in a row,” he said, “So, it will be nice to not have any swim meets for the next month and really get back to basics and fundamentals at practice.”

In the next month, he plans to cover everything he can, with a “focus on speed and power,” while also helping newer swimmers with some of the basics of swimming, like dives and turns.

When it comes to swimming, every stroke has lots of components involved, so there’s always something to work on.

That’s part of the reason Plahn enjoys swimming, for the “focus.”

“Specifically for me, as you’re swimming there, it kind of allows your thoughts to go towards ‘Okay, what are my arms doing? What are my legs doing?’” she said. This focus brings her “a peace of mind.”

Thinking about the many different factors that go into each race, making these improvements may seem daunting, but York isn’t fazed by the idea.

For swimmers putting forth consistent effort, “they keep getting better.” As his team keeps growing, York is “excited to see what we can accomplish.”

As the season continues, York is confident that his team is “going to finish very strong.”