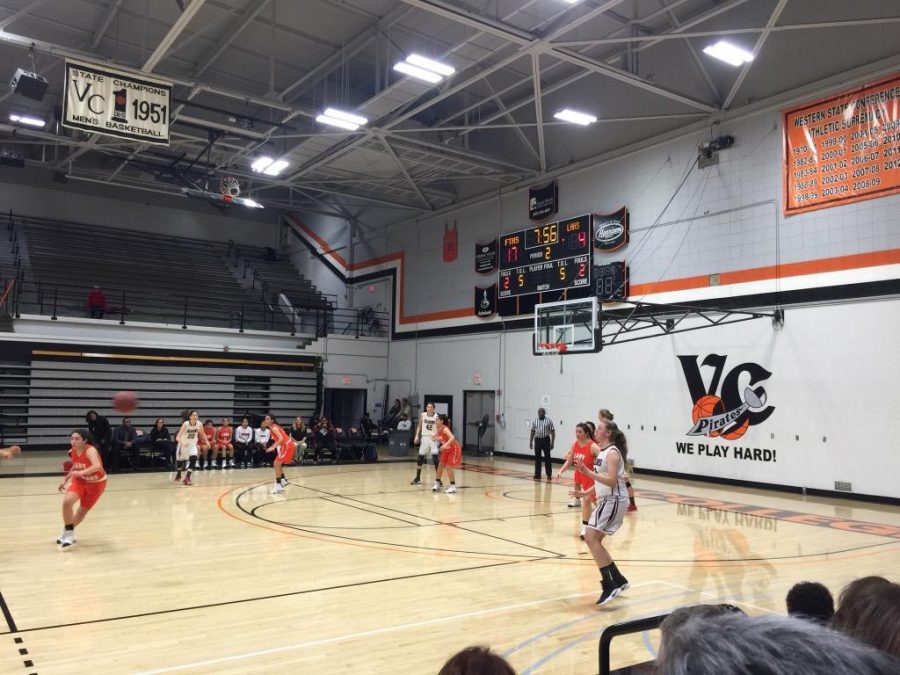 After earning a bye in the first round of the California Interscholastic Federation (CIF) Division IV playoffs because of stellar regular season play, the Foothill girls’ basketball team took the court for second round action against the Los Amigos Lobos. The Dragons took control from the start, and never gave much leeway, handling a 45-23 victory.

Abby Sourwine ‘19 won the tip and the Dragons were off and running with a quick three-pointer from the right wing by Emiline Bova ‘19. Los Amigos answered quickly with a layup inside to bring it to 3-2, but this was the smallest deficit the Lobos would face all night.

Abby Bova ‘19 grabbed an offensive rebound and scored, followed by a hook shot by Annika Kinnaman ‘19 and a fastbreak layup by Sourwine. With the score at 9-2, the Lobos called time out.

Kinnaman attributed their win to “intensity on defense” and rebounding, and was proud of the way that the girls played hard all night long.

After a defensive rebound, Abby Bova hit a jumper from the top of the key, then the Lobos answered with a layup. Cydnie Gutierrez ‘19 nailed a stepback three, and Sourwine got an and-one to end the quarter up 17-4.

Kinnaman started off the second quarter with another hook shot, and Emiline Bova got a layup after the block from Katie Bova ‘19. The Lobos tallied four free throws to bring it to 21-8. Sourwine got another basket plus the foul, and then she hit a jump shot from the free-throw line. A couple plays later she finished off the half with a putback off of a missed shot, and the Dragons were up 28-10.

All six points by the Lobos that quarter were from free-throws, and Gutierrez said that they need to focus on “not fouling in pressure situations.”

Coach Jason Edgmond said that his team played great defense, but should have fouled less because “12 of [Los Amigos’] 23 points came off of free-throws.”

Emiline Bova started the half off with a layup, and the Lobos answered with a jumper. Kinnaman got a steal and kicked it up to Emiline Bova for another layup to bring it up to 32-12. Los Amigos would hit a couple of jumpers including a three, and Abby Bova and Maddie Ozbourn ‘19 would score, leaving the end of the third quarter with a score of 36-18.

The shots weren’t dropping from outside in the second half, but Abby Bova thinks that the “poor-shooting night is temporary” and Edgmond said that the girls need to focus on scoring easy baskets.

Sourwine hit another jumper to start the final quarter, followed by another layup after she snagged an offensive rebound. Sourwine finished the game with 16 points, 13 rebounds, and four assists. Gutierrez scored a jump shot and a few free-throws down the stretch, giving her a total of seven points on the night, and that would be all for the Dragons, as they would win 45-23 over the Lobos.

Edgmond is ready “to go out and compete” next game, and both Kinnaman and Abby Bova said they are looking forward to playing a better team next game.

“Hopefully we can rise to their level of play and play hard,” Kinnaman said.

The Dragons will compete in the third round of the CIF playoffs against Pacific High School on Feb. 22 in San Bernardino.