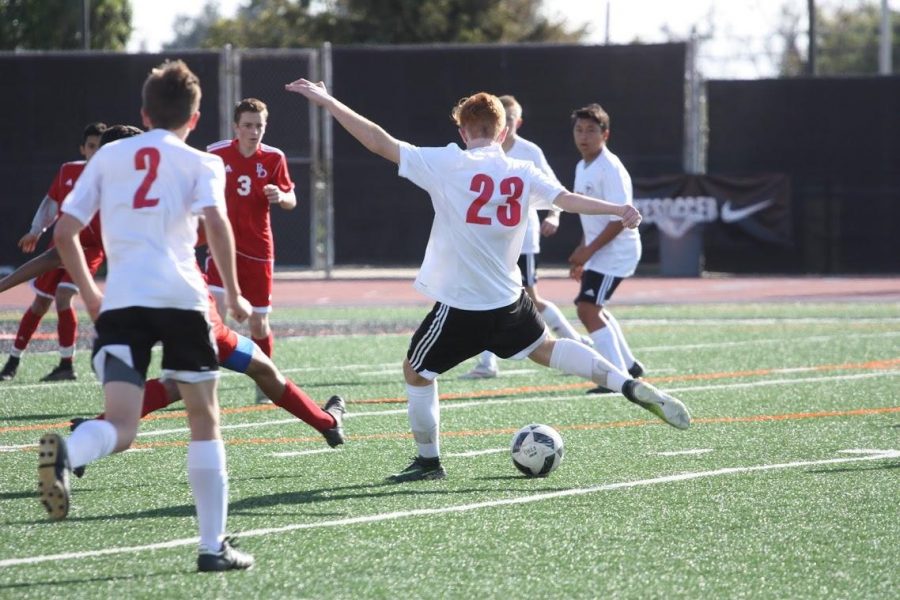 Even with the blowout, Coach Andreas Wedderien felt the boys should have scored at least ten goals, but he was proud that his team “didn’t get into a shouting match with the other team.” The frustration of the Cardinals were visible, as players continuously shouted at the referees during the game, which would prove costly for the team down the stretch.

Bishop kicked off to the Dragons who struck first with a goal from Cole Chilcutt ‘18 off of an assist from Jared Rodriguez ‘17. This early 1-0 lead seemed to energize the Dragons, who scored another goal after Chilcutt drilled a second one past the keeper, early into the first half.

Goalkeeper Kevin Waechter ‘17 recorded three saves soon after, and would finish the game with five saves on Bishop’s five shots on goal. Waechter said it was “one of our best games as a team” and that all players were stand-out because of the way they all contributed.

Waechter was proud of the team’s shutout and the way that they “shut the whole defensive side down.” Later on in the half, midfielder David Hill 18’ stuck a goal from outside of the box to give the Dragons a 3-0 lead. Coach Wedderien called Hill (who would finish with two goals) the player of the game because he was “everywhere on the field” and defended the other team well.

Aiden Wedderien ‘17 nailed a goal seconds before the end of the first 45 minutes, putting an exclamation point on the 4-0 half.

Bishop started the half with an early shot, but Waechter recorded another save. For almost 20 minutes, no goals were scored until Mark Spencer ‘19 cleaned up a missed shot by Foothill and gave the Dragons a 5-0 lead. Spencer felt that they could have “cleaned up their passing” and been less sloppy.

Not long after, two Cardinal players received a red card, resulting in their ejection from the game, and leaving the Cardinals with only nine players on the field to the Dragons’ eleven.

Minutes later, Foothill was rewarded a free kick from outside the box, which Hill took a drilled a deep shot into the back of the net for his second goal of the game. The game ended with a final score of 6-0 as a dominating victory for the Dragons.

Foothill will play its final league home game on Tuesday night, Feb. 7, where they hope to defeat Santa Clara High School and continue on to CIF playoffs.