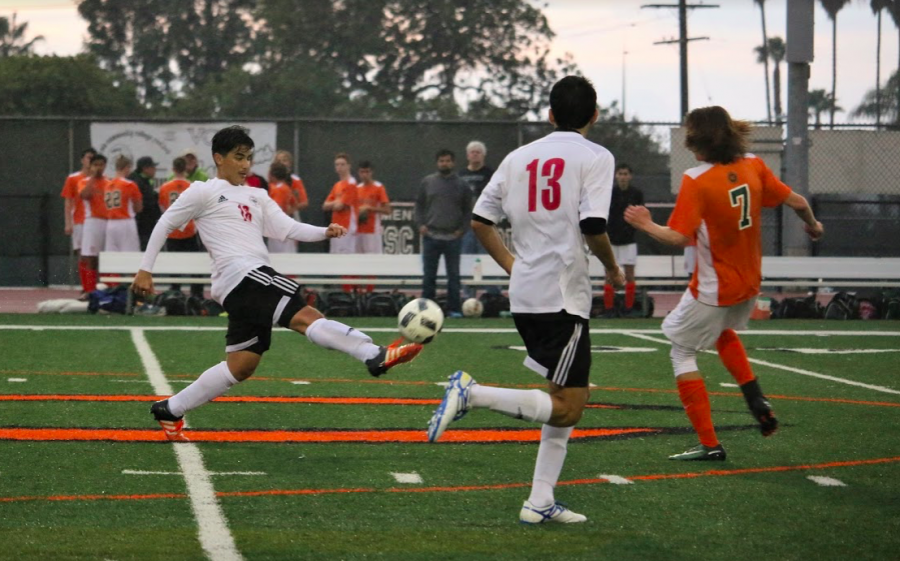 As the clouds and rain rolled in, Thacher School kicked off, signaling the start of the Foothill boys’ soccer team’s first home game of the season. The team fought hard on Tuesday night at Ventura College but was unfortunately defeated by Thacher, 2-3.

The Dragons started off strong when Miles Gillespie ‘17 scored the first goal of the game. Despite two saves by goalkeeper Kevin Waechter ‘17, Thacher eventually scored, bringing the game to a 1-1 tie.

Thacher quickly scored a second goal, causing the Dragons to fall one point behind. Gillespie felt that the team started the game off “fired up” but “lost momentum” once the team was scored on.

Thacher scored a third goal against the Dragons, pushing the Dragons behind, 3-1 as the first half came to a close.

Coach Andreas Wedderien felt that the team struggled on defense and did not play to their abilities in the first half of the game. He believes that the team did not perform the skills they had practiced, causing them to suffer three goals.

“I tell them to [make] sure that they are taking the space or the man rather than just standing around waiting for [things] to happen and then react,” Coach Wedderien said. “I want them to be proactive rather than reactive.”

Aidan Wedderien passed the ball to Gillespie, kicking off the second half of the game. The teams battled back and forth until Aidan Wedderien shot and scored a goal in the 23rd minute, giving the Dragons a second point.

According to Waechter, Aidan Wedderien’s goal was a “big surprise and a big uplifter” for the “entire team.” The game intensified and the number of fouls increased. Mateo Carillo ‘18 then received a yellow card for fouling. Despite the Dragon’s hard fought battle, the game ended and the Dragons lost 2-3.

“I’d say defensively there was a couple like cheap goals barely rolling in that shouldn’t be happening at this level so we need to work on that,” he said.

Being the goalkeeper for the Dragons, Waechter felt some responsibility for the team’s loss and felt that he “did not fulfill the duty of a keeper.” However, he believes that this game does not indicate where the team is headed. With practice, he believes that the team will become stronger.

“I believe that like we can improve just on practice and like how we can play as a whole team together and [can] develop into becoming a stronger team and better team” than their team when they played on Tuesday, Waechter said.

Gillespie believes that the team will need to “work hard if we want to get to our goal” of competing in CIF.

“We need momentum the entire season so we need to forget about this loss [and] keep pushing,” he said.