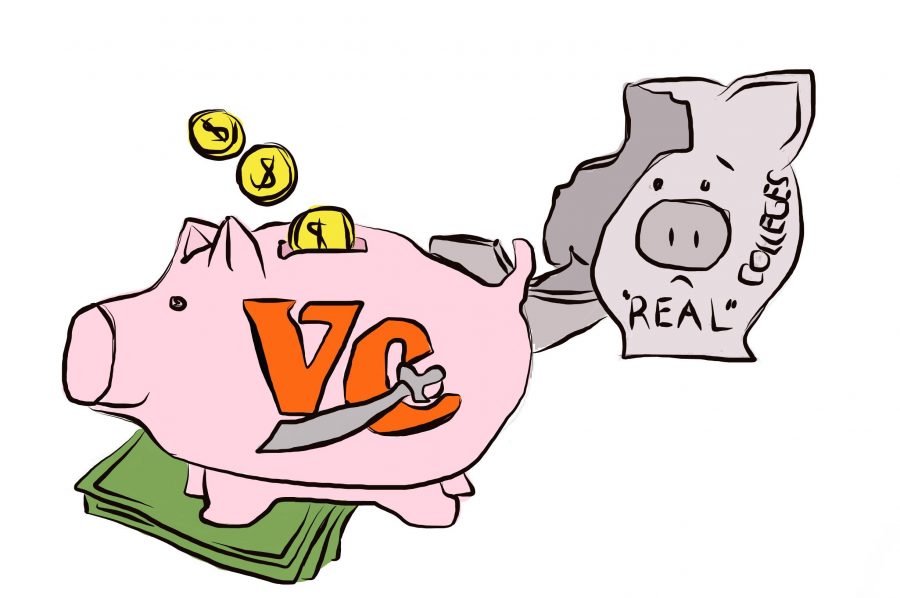 At Foothill, there are countless stereotypes about community colleges (particularly Ventura College because it’s right across the street). Though a lot of people will admit that VC is not a “bad” option, most won’t go so far as to say that it’s a good one. Lot’s of my fellow classmates view Ventura College as “easy” and a waste of time. I think brushing off a community college as worthless is silly. Students who choose to go to a community college like VC shouldn’t feel ashamed or like they’re letting down their teachers and peers.

Unless you get into one of your dream schools, Ventura College should be heavily considered. Students at Foothill are motivated and the AP classes so many of us have taken will help us graduate from VC quickly. Then, maybe you’ll only be in college for three years and not four.

Ventura College is great for so many reasons; here are a few.

First, (and the most recognized reason) it’s cheap/free. If you’re in VUSD and you fill out the application for the VC Promise (which is first come first serve) then you won’t have to pay for VC for the first year. Even when you do have to pay, community college is fairly inexpensive. Ventura College is only around 1,500 dollars for tuition and fees and maybe another 2,000 for books (additionally you could save money by renting books or buying them used).

In comparison to even the cheapest of four year universities (in California they’re the CSUs which generally cost around 25,000 a year), this is practically nothing. There are also scholarships for anyone who can’t afford to pay the fees. Everybody should be thinking about money. Even if your family can afford to pay for a four year university, why would you want them to when there’s a better option?

Next, I hear plenty of people say that “yes, VC is cheap, but it’s simply too easy and not a good enough school.” I think this is ridiculous. Nobody is too good for VC. Also, the classes aren’t quite as easy as many people make them out to be. Any high school student who has taken a language or science/math class at the college can testify to that. Sure, some classes will be easy. This is true everywhere.

We shouldn’t judge a school based on perceived “easiness” but instead by the quality of the information learned. Again, some classes aren’t going to be great and some teachers won’t be either, but even Harvard has bad teachers (according to the students).

Personally, I’d rather be in a community college class with maybe 30 other kids for my general education courses then be in a lecture hall with 700 being taught by a teaching assistant. The classes at a community college will probably be a better learning experience for many than a UC or other huge research university. The teachers are also going to be just as good (though probably not as famous).

Many community college teachers have PhDs and are more than qualified to teach their subject. In addition to this, they’re people who are passionate about teaching and not research. At many huge universities, you’ll have professors who are there just to write papers (and who couldn’t care less about teaching or students). Now, there are hundreds of great universities in the US that aren’t like this, but not everyone is going to get into them and I can guarantee most are still pricey.

The worst misconception about community colleges is probably that they simply aren’t “good” enough schools. Small class sized and good teachers are all qualities of a “good” school in my opinion. However, if your dream is a four-year university, you can transfer to one. Once you transfer and finish your four-year degree, I promise there won’t be a huge sticker on the diploma saying “TRANSFER STUDENT: THIS PERSON ISN’T REALLY GOOD ENOUGH FOR A JOB OR GRADUATE SCHOOL” in bright red letters. The diploma will look just like any other student’s diploma.

The only difference will be that you saved a ton of money (maybe even 100,000 dollars if you’re at a private school). Most schools (including those in the top 10) accept transfer students. You can still be prestigious by going to a community college and you can still get an excellent degree. You can also finish a vocational degree and get a good-paying job after just two years.