“Passengers:” a visually stunning voyage through the stars 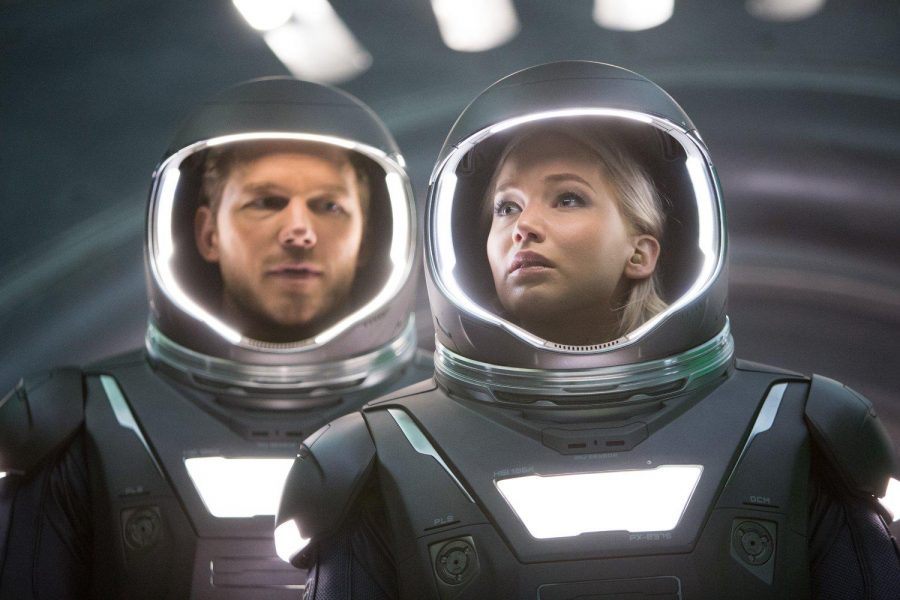 There is a reason why they woke up early. The winter blockbuster event, “Passengers,” directed by Morten Tyldum, stars Chris Pratt and Academy Award winning actress Jennifer Lawrence as two lonely people stranded on a spaceship headed to a distant planet. The two talented actors and dazzling visual effects add to the original and entertaining storyline created by Jon Spaihts.

“Passengers” has the potential to transport audiences to a new universe of thrilling interstellar romance, but overall misses the mark in the box office and gets lost in space.

On a 120 year journey over 60 light years away, the starship Avalon carries 5,200 passengers to the distant colony planet “Homestead II.” Jim Preston (Pratt) accidentally wakes up from hibernation 90 years early, leaving him alone and stranded on the ship, with the company of a few androids.

One year after the hibernation pod malfunction and numerous attempts to either break into the bridge of the ship or wake up the crew members, Jim begins to question the importance of his life until he stumbles upon Aurora Lane (Lawrence) sleeping in the hibernation pods. Torn on what to do, Jim eventually decides to deliberately wake Aurora up from hibernation.

Despite Aurora’s belief about waking up early due to another hibernation malfunction, the two begin to fall in love as they are stranded together for the rest of their lives. However, a series of malfunctions begins to destroy the ship, threatening not only the lives of Jim and Aurora, but everyone on board.

Though certain themes and scenes in “Passengers” relate to other science fiction movies such as “Gravity,” Spaihts adds constant humor, intense action and thought-provoking moral complexities to strengthen the originality of the plot.

Pratt and Lawrence make the movie what it is. Without them, the movie may have sunk in its attempted voyage, failing to execute the compatible relationship between the two characters as they fall in love, fight with each other and eventually work together to save the ship. Where Pratt adds humor, levity and moral complexity to the movie, Lawrence adds emotion and a certain dynamic that people relate to, overall progressing the storyline and the edifying difference between right and wrong.

Though they may not be award winning performances, the two actors don’t fall short of expectations and succeed in bringing their dynamic characters to life in a complicated, fast-paced story.

When people think of science fiction movies set in space, “Star Wars” and “Star Trek” tend to come to mind. However, “Passengers” sets a whole new standard for visual effects and the sci-fi world. The starship Avalon is like a helix shaped, modern and luxurious cruise ship that makes anyone wish they were aboard.

Many elements and scenes of the movie heavily rely on Computer Generated Imagery (CGI), such as Aurora being trapped in floating water when the ship experiences gravity failure and when the Avalon slingshots around the star Arcturus. However, the CGI makes these scenes the most visually stunning in the movie. The visual effects make a memorable and beautiful voyage not only for Aurora and Jim, but for the audience as well.

Boarding for the Starship Avalon has begun. Don’t miss Jennifer Lawrence and Chris Pratt in #PassengersMovie – see it TODAY! pic.twitter.com/fJzvuKV0Mj

The music, conducted by Thomas Newman, artistically adds to the tone of the movie, instantly creating an intense feeling of the unknown, raw emotion and the dangers of technology and space.

Tyldum, who got backlash for not being the ideal director for this interstellar adventure, exquisitely progresses the story with a fast, yet intriguing pace, as well as jaw-dropping cinematography that makes you question the power of space.

The only major issues in the film are the few important plot holes left unexplained and the controversial twist in the beginning. This may have contributed to harsh reviews from critics and the failure to grasp profit in the box-office. Though “Passengers” has the potential to sweep everyone away with its beauty, it seemed to be washed over by the success of “Rogue One,” which stole the holiday season box-office.

Despite its unsuccessful fight for the domestic box office, “Passengers” is a vivid and unforgettable journey, with the talented help of  Lawrence and Pratt, and shining visual effects. “Passengers” is sure to engage audiences with romance, action and moral complexity, making it one of the best science fiction movies in 2016.