The Foothill Dragon Press • May 16, 2011 • https://foothilldragonpress.org/2566/news/c101-budget-stories-archive/foothill-cuts-speech-ap-biology/ 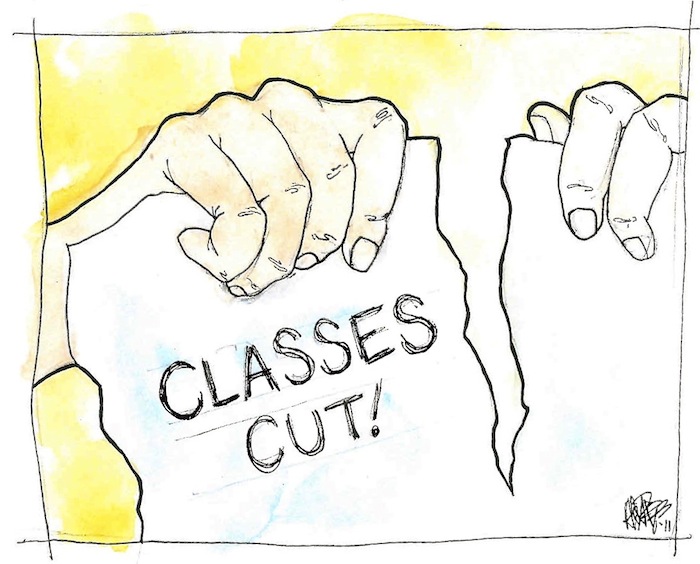 While next year’s state budget is still pending, Foothill Technology is making cuts to its own courses.

Already, Advanced Placement Biology, Forensics (Speech 1), and Speech 2 will not be offered next year because of low enrollment numbers.

“We’re basing the classes on the need of the kids,” Principal Joe Bova said.

AP Biology, which has always been a smaller class, (this year’s class size was 25 students) only received nine registered students for the 2010-2011 school year.

Bova said that not too long ago, he ran AP Biology with only 14 students. However, times have changed.

“We’re looking at running all classes at around 30,” Bova said, “and most of our Honors classes run in the high 40s range.”

Speech 1 however, which was a full class on campus this year with 38 students, only had seven sign up for next year. The number of Speech 2 students dropped by 50 percent, from six to three.

Though the classes will not be offered next year, those interested in Speech would be able to meet as a team after school.

“It is a mystery to me why there is such a dramatic drop,” said Speech and Debate Coach Jennifer Kindred. “It is apparent that something is going on.”

Foothill counselor Steven Boyd believes that the pressure of getting into college is turning some students from taking an elective to a class that will look more impressive on an application.{sidebar id=11}

This may be true, as the number of student registered for a physics class (AP and College Prep) has raised from 69 (this year’s current enrollment) to 142.

Others have speculated that the decline in elective enrollment is because more seniors are registering for a five-period day next year. However, Bova does not believe this is the case, saying that the number of seniors with fewer periods has not increased dramatically.

The number of students taking Physics has also increased for next year due to new BioScience Academy requirements.

Another sinking class is AP Psychology.  After its first year, its enrollment stands at 24 students for next year, but the class is still too small to run. The College Prep Psychology class swelled to its highest numbers ever, with 95 students.

“I’ll be checking out the AP books and the study guides and setting up FIRE sessions.  We will make it work,” Lindsey said. “It would be something I would be willing to do personally because it’s the right thing for the kids,” she said.

Budget cuts are not only affecting classes.  Pink slips have been given to 42 people in VUSD; and last week, all but 11 of these positions were reinstated.  Five counselors, four elementary school teachers, and one nurse remain pink-slipped, according to President of the Ventura Unified Education Association Steve Blum.

Five Foothill teachers that were pink-slipped  are among those who were reinstated, but Foothill’s counseling staff may still be affected by this cut.

“We have an incredible counseling staff, and we are only budgeted for two now,” Boyd said.

“All of the schools will have fewer counselors, but the thought of returning to 450 students per counselor is very troublesome,” Bova said.

“It’s just a very touchy, stressful situation,” said counselor Debbie Freeman, who still does not know whether or not she will be working at Foothill next year.

“It [the budget crisis] is a political situation over money. Unfortunately, it’s our employees and students that are suffering, and that’s just not right,” Boyd said.