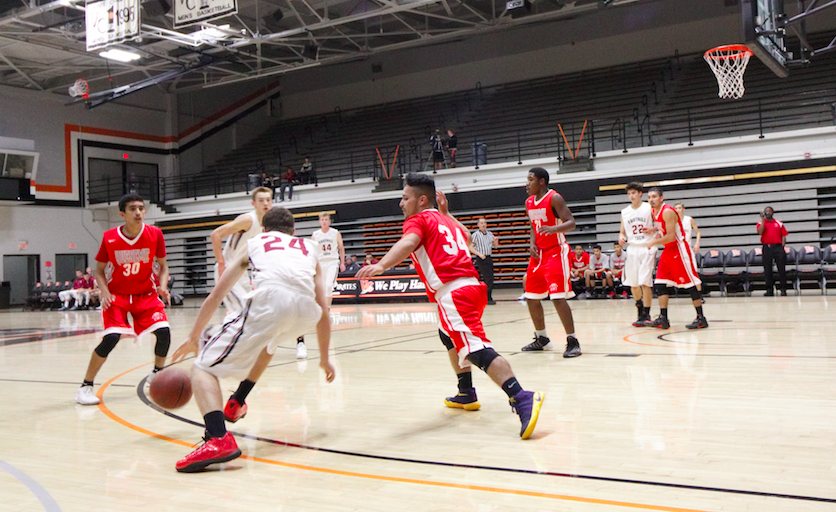 Students, parents, and members of the community rushed away from the cold night and into the Ventura County gym to watch the Foothill Dragons take on the Hueneme Vikings in their home debut on Tuesday, December 13. With pre-game jitters coursing through each player, the gym was electric with anticipation from athletes, coaches and spectators. The advantage went back and forth throughout the game until the Dragons finally sealed away their win in the final minutes of the fourth quarter with a final score of 56-48.

The game started with Hueneme High winning the jump ball and scoring twice within the first forty-five seconds, taking a 4-0 lead. Dale Starr ‘17 attributes the slow start to nerves, saying the first home game of the season means “a lot of butterflies in your stomach before the game starts.” Daniel Holst ‘17 concurs that “there are always ‘pre-game jitters’ but once the game starts they usually go away.”

The Dragons were scoreless until their nervousness faded away with a layup by Holst to spark the offense. Starr followed with another layup 30 seconds later, tying the game at four.

After another layup by Starr, the Vikings called a timeout, which seemed to revive their offense, as they scored two back-to-back three pointers and two free throws shortly after. The Dragons were down 14-6 with three minutes left in the quarter when Jack Vielbig ‘19 hit back-to-back threes to bring the momentum back to the home team. With a layup by Holst, the game was tied at fourteen and the competition intensified.

The Dragons kept their momentum going in the second quarter, with scores from Nathan Bova ‘19, Colin Vallance ‘18 and Dominic DuMont ‘17 bringing a nine point lead over the Vikings. They kept the Vikings scoreless for four minutes of the quarter, but allowed nine points in the four minutes that followed. They went into halftime leading 28-26.

Coach Dean Prophet thinks the lack of offensive rebounds really hurt their opportunities in the first half. He believes if the players “man up” and start getting rebounds it will make the offense run more smoothly. Tyler Ragan-Sutton ‘17 agrees that rebounding is an area the team needs to improve on. “I did my best when I was out there [but] they got too many rebounds on us,” he said.

The third quarter brought exciting plays on both ends. The game was evenly matched, with a score differential of just one point when the Vikings made a big play. After scoring a three-pointer to take the lead, the Vikings forced a turnover which led to a fast break going the other way.

Fouled on the layup, the players lined up for two free throws. The first shot was sunk and the second shot bounced out and into the hands of a Viking, who kicked it out for a three point shot. With a seven-point turnaround and the loss of the lead, the Dragons needed to respond.

Vielbig stood out to both his coach and his teammates. Prophet said Vielbig was an “obvious” standout, “hitting needed threes” throughout the game.

Starr agrees that Vielbig played a role in the win, saying “there isn’t much more we could have asked for from him.”

Looking forward, Prophet and players agree that Tuesday’s game, and win, will help fuel the rest of the season.

According to Ragan-Sutton, a win like this brings “a lot of encouragement and positive vibes to the next game.”

With the help of team chemistry and practice, Prophet believes the team will “keep improving with every game.”

Editor’s Note: Jack Vielbig is a Dragon Press staffer. He was not involved in the writing or editing of this article.