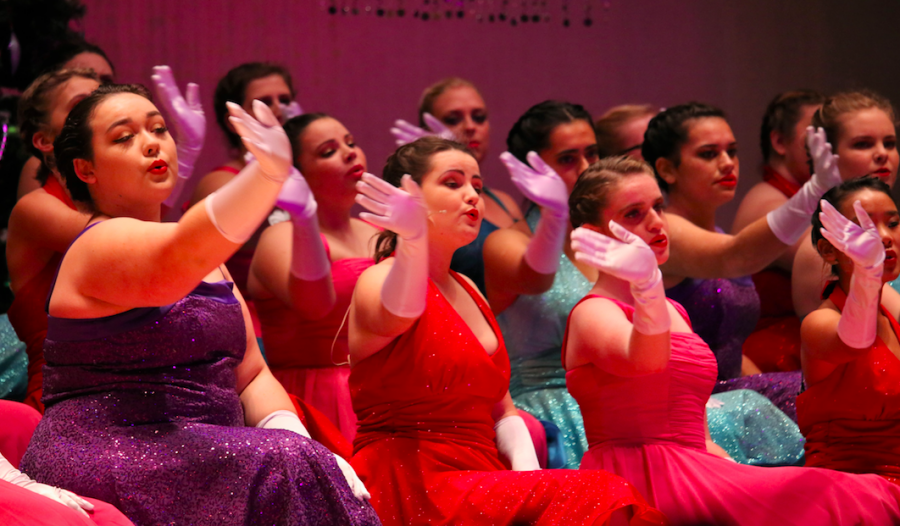 In their annual winter concert, the various show choirs of Ventura Unified School District brought a hearty dose of holiday cheer to the local community. Held in Ventura High School’s main auditorium on Friday, December 9th, the vocal ensembles put on a dazzling show that made this holiday season one to sing about.

The younger children’s choirs, middle school’s “Crescendo” and elementary school’s “The Notables” were an absolute joy. While their young, still-developing vocal chords may not have the depth and range of the high school choir, their enthusiasm and energy were unparalleled.

The main attraction of the concert was the high school-level “Company.” The choir features Ventura’s most seasoned singers and performers, including several four-year students, Miriam Larsen ‘17, Olivia Cate ‘17 and Brianna Corbett ‘17, who performed a stunning and dramatic solo. Cate and Corbett are both Foothill students.

In an all-boys number the bowtie-clad chaps performed “You’re a Mean One, Mr. Grinch.” Bathed in a sickening green light, the jocular number featured several amusing references to popular culture, including a perfectly synchronized ‘whip,’ which elicited an inevitable hubbub from the audience.

Similarly was the contemporary hit “Text Me Merry Christmas.” During a spoken-word conversation, the performers held up cardboard signs, mimicking a bland but sincere back-and-forth text conversation.

As the evening came to a close, from the ceiling descended a majestic flower-laden peace sign, signaling the show’s grand finale. As part of an annual tradition, House invited all current and former members of any Ventura Unified choir to take the stage for one last song. A flood of musical children filed from their seats to the front of the auditorium. The sea of students, likely sending the stage’s body count over capacity, served as a visual confirmation of the gravity and breadth Ventura Unified’s art and music programs hold for the community.

The sea of students, likely sending the stage’s body count over capacity, served as a visual confirmation of the gravity and breadth Ventura Unified’s art and music programs hold for the community. The final number was a rendition of John Lennon’s “Imagine.” The song was sung in out loud as well as signed in American Sign Language.

In this performance, unlike any other Company show in recent history, Ventura Unified’s students made great use of props, lighting and complex choreography. The large turnout of parents, friends and lovers of song were treated to a festive night of music and joy.

Correction: A previous version of this article incorrectly classified several students as belonging to the Class of 2018. This has since been corrected.