Trump hysteria through the eyes of Lincoln 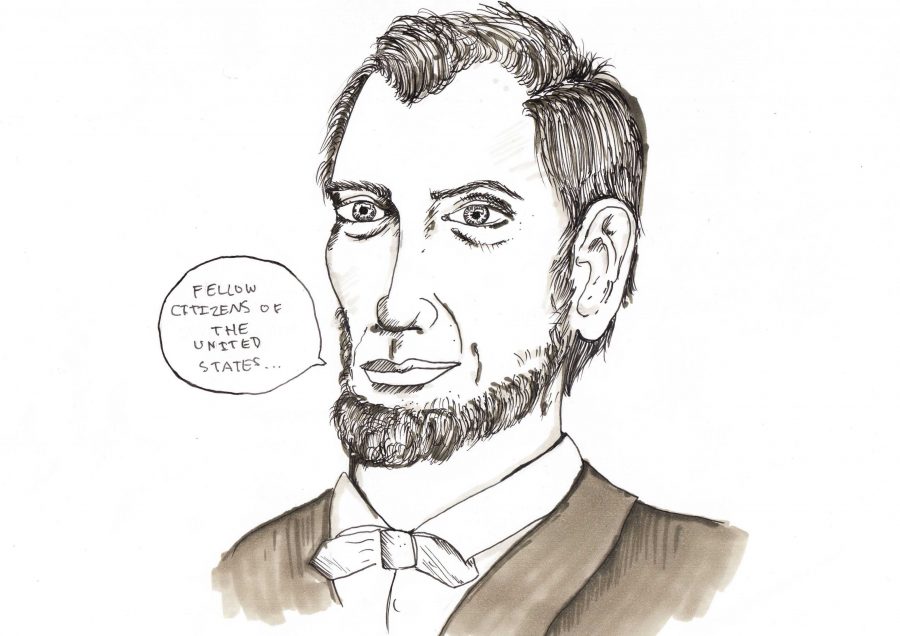 A Republican President has been appointed by the Electoral College, despite not receiving the popular vote. As he steps into office, tremors surge through the country, striking fear deep into the hearts of states and carving a future of disunion. You know this man well, his name: Abraham Lincoln.

Now, I have no intentions of comparing our 16th President with our 45th President-elect, but would rather clash two houses divided in the hopes of shedding light on the ridiculousness of the Trump fever that has swept the nation. To expose the ludicrous nature of some peoples’ worries, I enlist the aid of Lincoln’s inaugural address, so that the light shed on his dark time can reach our own.

Though many abhorred Trump’s election, many are joyous. Trump may have conquered the electoral college, but the popular vote slipped from his grasp. Opponents to the soon-to-be President hold a fervent belief that this should be the basis for deciding who enters the oval office, clamoring for a change to the system. Another example of denial of the results are the efforts pushed by Jill Stein and the Green Party to recount votes in Wisconsin, Michigan, and Pennsylvania.

There’s no question that, as Lincoln would say, “apprehension seems to exist among the people,” but what he also pointed out in the fundamentals of our nation is that we are a United States, bound together by a “contract.” People of various backgrounds come together to forge a common identity, and according to Lincoln,  it is true that “one party to a contract may violate it — break it” but “does it not require all to lawfully rescind it?”

We are not Greens, Democrats, or Republicans, but Americans who each contribute to the welfare of our society. As humans, we are naturally different, but this contract between states allows us to pool these differences and transform them into a resolve far stronger, and sometimes that calls for compromise, even if one party isn’t entirely happy.

George W. Bush was elected without a popular vote, and I assure you many Republicans were not happy with Obama, yet we still survived 16 years without turning into an incorrigibly dysfunctional nation. In California, we seem to live in a bubble where the entire nation was robbed of a President Hillary, yet that is not the case. There are many states that proudly flared red when the time came to vote, and if the losing side wants to set sail for change, then everyone has to be on board.

Another recent fit of frenzy surrounding Trump was his comment on flag burning, which as a fellow writer has detailed, will never penetrate the joined shield of this union. This, the burning question of a leader dousing the rights we hold so dearly, is something Lincoln also had to face in his own crippling issues. Yet, he clearly displays the simplest idea we must all never forget, declaring “I have no purpose, directly or indirectly, to interfere with institution of [a law] I believe I have no lawful right to do so.”

The South in particular held certain rights, including the awful practice of slavery, and they feared Lincoln may attempt to take that from them. However, he makes a point that as a law and right, no matter how degrading to human kind, he would have no business in interfering with their peculiar institutions, no matter how angered abolitionists would be. After all, the Supreme Court had already declared federal meddling mute in the Dred Scott decision. I’m definitely not advocating for slavery, but I want to make it clear that Trump won’t be able to overturn Supreme Court decisions, like Lincoln knew he couldn’t.

As for today’s heated debate, the supreme court has also already called its validity in two cases, the first being Texas v. Johnson in 1984, where Gregory Lee Johnson burned an American flag in protest of president Ronald Reagan’s policies in front of the Republican National Convention in Dallas, Texas. As you would suspect, the act highly offended many, and under a Texas statute, the desecration of a venerated object saw him tried and convicted. When he appealed, he stated a reason that would become polemic to this day: symbolic free speech. When the case reached the Supreme Court, it was ruled in his favor and would be affirmed as an extension of First Amendment right nation-wide in U.S. v. Eichman.

Our right to free speech has already been set in the constitution, we can’t allow Trump’s comment to drive the splitting stake of division deeper.

The point is, today’s house divided is an unnecessary one. This unprecedented election has sent the nation on a blind rampage, looking for every possible motive to prevent the inevitable. Trump is going to be president, and we must stop running like headless chickens and instead work together to keep our heads firmly placed and high. Trump is a controversial man, but we do not need to be absorbed in his polemic traps. If Lincoln could see the state of the union today, I imagine he would say this:

“We must not be enemies. Though passion may have strained, it may not break the bonds of affection.”

If you truly care for your country, your spirit should not be wasted in furthering the divide, but should serve as one of many threads to weave our union together permanently.