Tacticians of music face off at The Battle of The Bands 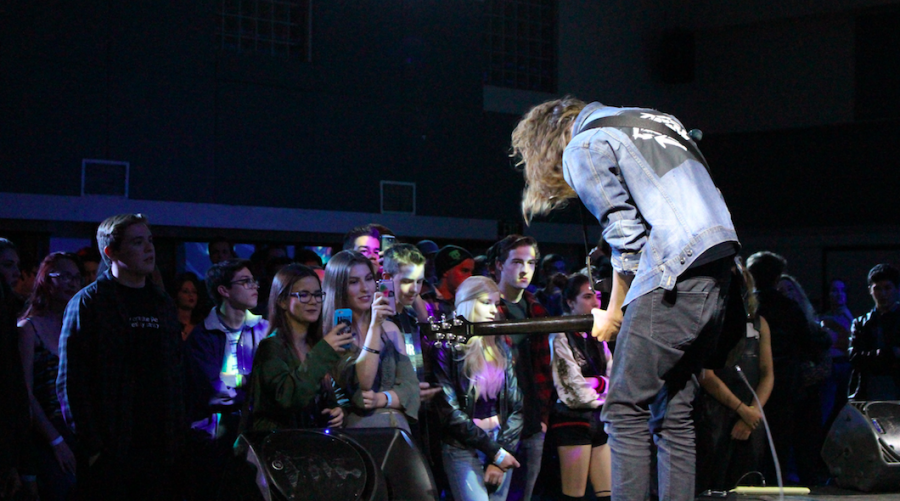 On December 3, people from all over Ventura County, Malibu and L.A. came to Thousand Oaks to witness “The Battle of The Bands,” where eight bands competed to win a first or second place prize, as well as bragging rights and recognition among the teenage musical community. The eight bands were judged on the basis of ticket sales, reaction of the crowd, rhythm and timing, as well as stage presence.

1.  As Empires Fall: “As Empires Fall” opened the event, getting the crowd ready for what would become a night to remember. With a heavy bass, two guitars and aggressive drums, they kicked off into a fast paced pop-punk song.

The drummer was also singing which is highly impressive and not an easy task, especially considering how fast and aggressive he was playing. The music they were playing resembled that of Blink-182 and Greenday combined with Metallica and Attila. They had great energy and executed vocal harmonies that blew myself, and the crowd away.

2. Project Suburbia: The second band of the night, “Project Suburbia,”opened with a Red Hot Chili Peppers song, causing the crowd to go wild. A spunky female lead wearing yellow glasses held her own as she belted to the crowd, sparking the fire that continuously burned for the rest of the night. It was highly impressive and very seeing so many teenagers in bands. Project Suburbia was a rad band to see and I’m interested to see what the future holds for this young band.

3. The Ombres: Before starting, Diego Rodrigues, lead guitar and vocalist, started off by saying, “We are a Limp Bizkit cover band,” then the new drummer Izzy Elizondo proceeded to count off  “Coconut,” stirring the crowd into a vicious and energetic whirlpool of teenage ferocity.

That catchy surf riff never gets old and will never fail to please the crowd. Following the energetic opening song, the band gradually worked its way through their short set to slower and slower songs. They proved their musicianship and gusto to the judges who were elevated on a stand in order to view the bands playing.

Hands down, The Ombres got the best crowd response compared to any other band that played. Aside from the screaming, laughter, moshing and dancing, “The Ombres” were able to showcase their creative style by tearing it up and clothing themselves in very classy ruffle shirts, slacks and dress shoes.

4. SpoBros: I thought once at a festival called “Beach Goth Fest” that my mind had been eviscerated after seeing a band called “Chicano Batman.” I didn’t think it could be done again.

I can tell you now that there is without a doubt a large and fairly desolate spot where my mind used to be because the SpoBros were able to rid my cranium of any grey matter that still somehow managed to be there.

With Milo Sposato on saxophone and vocals, Julian Sposato on trumpet and vocals, Oriana Cognata on guitar and vocals, Sean Levine on bass, Michael Leese on keys and David Kohn on drums, SpoBro provide a highly elevated sound that included influences of jazz, funk, RnB, rock‘n’roll and many other types of music.

Opening strong with Milo and Julian on their brass instruments, they barreled into their first song at full force. The original, intricate and powerful music of the SpoBros took the crowd by surprise, stunning them with a sound like no other band at the event that night. The young crowd screamed with joy and danced in a pit to the funkadelic and delicious music, while the band danced and jived on stage,showcasing their energetic and perfect synergy.

Nearing at the end of their set, something happened that I’ve never seen a band, let alone a band of high school kids, do before; each member of the band took a solo. Dropping like hydrogen bombs, the SpoBros finished their set loud and proud with silly string and the meanest solos anyone had ever heard. If this band doesn’t make it big, I have zero faith in the music industry of today.

5. In Ten Cities: Following The SpoBros was “In Ten Cities.” They began to play, conjuring up sounds like that of The Foo Fighters, ACDC and Metallica. They actually ended up playing a Foo Fighters song, and I don’t think I’ve ever heard a better cover of it, considering the majority of the band was under the age of 16.

It was extremely impressive, and when you see the drummer who looks so young, you can’t help but be in awe. To add to the effect, the lead guitarist flicked about twenty picks into the faces of the crazed fans in the crowd, while shredding amazing solos.

6. My Native Tongue: Three young blonde fellows took the stage after The Intensities, and after a double take, I realized that this band was a band of triplets! Mitchell Fraye on drums, Garrett Fraye on bass and Spencer Fraye on guitar make the band known as “My Native Tongue.”

With influence from bands such as The 1975, Twenty One Pilots and As Tall As Lions, the band used heavy reverb and very aggressive drums to amp up the crowd and provide a very interesting and original sound for the audience to dance and move around to. Starting off slow and calm, the band warmed up and jammed a bit.

Slowly but surely they began to get faster and faster, with Garret switching between his bass and keyboard. Every time Mitchell was going to do a big drum roll or exciting fill, he would look up from his kit, making a contorted face of absolute ferocity and intensity, while also smiling and having the time of his life.

7. False Reality: Aside from the fact that the audio technician really dealt this band a bad hand, there’s not much to say about this band. It’s hard being a very young band competing against a bunch of bands who have been together for a long time. Some of these bands have been together for a at least a year, if not longer, so it was a tough competition for the metal band called “False Reality.”

They started their first song with heavy growling bass and with the gain of the guitar turned up all the way making for a weird and harsh tone. The drums were also nearly gone as the sound guy was taking his sweet time to fix his error in the mix.

The vocals for this band were interesting because there was less screaming and growling, however there was a lot of singing. All in all this band did okay for being as young and inexperienced as they were, but hopefully they will improve with time.

8. Local Rebellion: A long, blonde haired fellow with a backwards hat took the stage. He wore possibly latex or leather overalls and he had a distinct look in his eye. A look one makes when they know the end of night is upon them. A look that he knew that his band was bound to end the night with a bang.

The rest of the band filled up the stage and they began their set. This fairly new band started off immediately rocking hard. Their lead female singer was tiny, yet her voice was enormous, filling up the entire room.

The Sposato Brothers’ band “SpoBros” won first place in the competition, with “My Native Tongue” as runner up. It was an excellent showcase of talent and the diversity of music that this part of California has to offer. It was a great experience for all who showed up whether to play music or to watch these band get down and dirty.

After they received their reward I talked to SpoBros about how the band met, the contest, and the future of their band. “We just wanna get a couple records out and see where we go from there” said Milo Sposato, who plays tenor saxophone and does lead vocals.

“I want to go to the point where we get enough recognition for the talent that we are putting out,” said guitar player and vocalist Cognata about gaining notoriety and recognition for her and her band’s hard work.

“This is my hometown pretty much and I’ve never had the opportunity to share my music with the people around me, and finally got the opportunity to bring people out that I love that live near me, that have never seen me play before after a year of being in this band for a year,” explained Levine. This group of very talented and genuine individuals blew me away and I am very interested to see what they will soon be releasing.